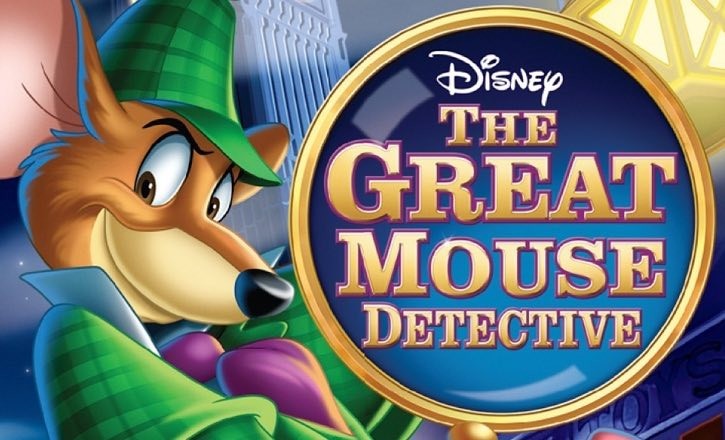 The Great Mouse Detective was released on blu-ray in October, 2012. Jeff Heimbuch originally wrote this review for Communicore Weekly (the Greatest Online Show™) during the blu-ray release.

I will admit, I had not seen The Great Mouse Detective in years. In fact, I was probably still a kid the last time I saw it. So, I was a little hesitant when it came time to view it, as I didn’t think it would hold up for a number of reasons.

You see, The Great Mouse Detective was one of the last films made before Disney’s renaissance period that began with The Little Mermaid. It wasn’t based on any fairy tale, but rather, on a children’s book by Eve Titus that placed Sherlock Holmes in the world of mice. It didn’t fit in with the typical Disney formula, with not being a musical and not sticking to the classic tone. But still, for whatever reason, this film still works.

For those of you who haven’t seen it yet, the film centers around Basil of Baker Street, the great mouse detective himself, and his companion Dr. Dawson. The two team up with Olivia Flaversham, a young girl whose father was kidnapped by Basil’s arch-nemesis, Ratigan.

One of the things that struck me the most while watching the film is it’s decidedly darker tone. It doesn’t skew to make itself light and happy to its younger audience, but instead straddles a line that some will not expect it too. And on a literal note, the entire film doesn’t see a hint of daylight at all, keeping it “in the dark” for its entire running time. The tension runs high for most of the film, never letting up until the end, so it may be a little much for younger viewers.

While it isn’t a musical, there are only two real musical numbers that make up the film, while the rest of the score by Henry Mancini is quite cartoony. Overall, though, it serves as a nice introduction to the world of Sherlock Holmes for the younger viewers who have not yet read any of his exploits.

Worth mentioning is the fantastic performance by Vincent Price as the evil Ratigan. Even as just a voice, that man can command a performance, and it’s incredible to hear. Barrie Ingham and Val Bettin both do an excellent job as Basil and Dr. Dawson, respectively, but the real standout is Price. He makes Ratigan a villain worthy of contending with, and one I’d watch again in another film!

On the more technical side of things, it is quite obvious that this is one Disney film that has not undergone the intensive restoration process. The film is filled with noise and grain on the blu-Ray. While it may remind older viewers of the time the film was released, where it probably looked similar, newer viewers may be distracted by it. Colors are somewhat muted, and while that may fit well with the tone of the film, it is still took me out of it a bit. It does seem like this may have been rushed onto Blu-Ray, and a few more months of work could have made the picture more pristine. It is a step up from the DVD a few years ago, but not by much.

There are three very short extra features included. The first is an overview of British detectives that might amuse first time viewers, but it is rather forgettable. There is also a sing-along version of one of the songs from the film.  Finally, the making of feature is a shortened but interesting collection of interviews on the making of the movie.

Overall, I still enjoyed looking back on The Great Mouse Detective. Admittedly, I didn’t remember much of it, so it was like watching it again for the first time. Younger viewers might enjoy this version of “Sherlock-lite,” but may be thrown off the by the very un-Disney-like feel of the film. If you don’t already own the DVD version of this, it’s definitely worth picking up!

What do you think about The Great Mouse Detective?