The Disney Imagicademy Storymation Studio Stop Animation Movie Kit showed up with several other Wonder Forge games to try out. This is the one that my 12 year-old was most excited about, even though he’s played Star Wars Galaxy Hunt more times than I can count.

The Imagicademy Storymation Studio Stop Animation Movie Kit is geared for kids age four and older. Based on the child’s age, they might need parents or older sibling’s help to do the whole process.

The kit comes with everything that’s needed to make stop motion animation, except for the required iPod, iPhone or iPad. You can download the app from the App Store once you get the kit.

What’s in the box:

The only thing that I had to help with was putting the tablet stand together. My son’s iPad Mini fit perfectly, but an iPod or iPhone should work just as easily. 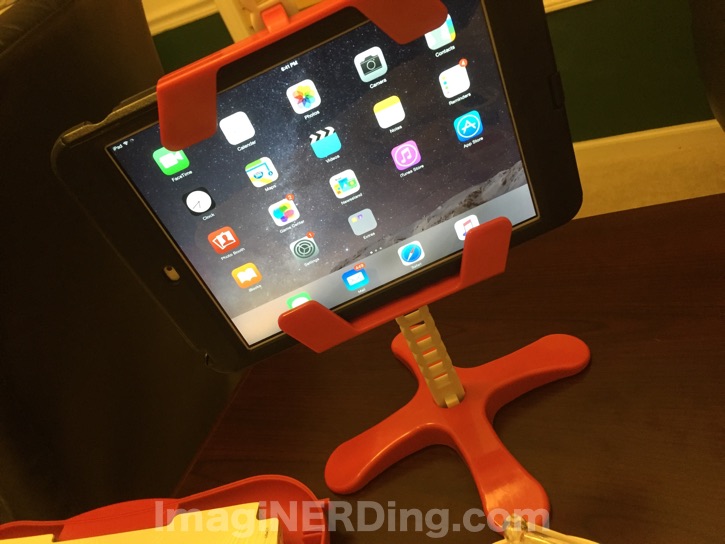 My son and his friend were super eager to get started. They set up the San Fansokyo background and stage. They wanted to make a film with Mickey and some of his toys. I wasn’t sure what to expect, but I really wanted them to try this in their own.

The instructions also included a primer on basic stop motion animation. It included tips on how to shoot as well as how to use the included animation wands. They didn’t use any of the modeling clay or the cut-out figures, mainly so it would be simpler. The top of the tray included a few molds you could use to decorate the cut-outs.

The boys took about 20 minutes to make the following video. There seemed to be a slight learning curve for them, especially with timing on the app. I think if they took more time, they’d be happier with the end project.

I love that you can see hands and a face in the video!

What do you think about Disney’s Imagicademy Storymation Studio Stop Motion Film Kit? Is there budding filmmaker in your life that would like this?