George: Disneylanders is a fiction book set at Disneyland, usually, this doesn’t bode well. I’ve read (and reviewed) a few fiction-based titles that take place in a Disney theme park. By and large, most of them seem to fall short of expectations–whether it’s the plot or the characters, it always seems like the author gets hung up on the place. The other issue seems to be the inaccuracies that plague most Disney fiction. When you love a place as much as we love the Disney parks, it can be very frustrating and distracting to read about the main characters walking from Frontierland to the Japan Pavilion in less than five minutes.

Jeff: The problem is usually the author gets distracted with the location itself, and instead of using it just as a backdrop for their story, they allow it to become its own character. Of course, that often makes the location overshadow the main plot itself. Thankfully, Kate Abbott’s Disneylanders is one of the few titles to break that curse. Not only is it Disney accurate, but it’s an amazingly written story as well! 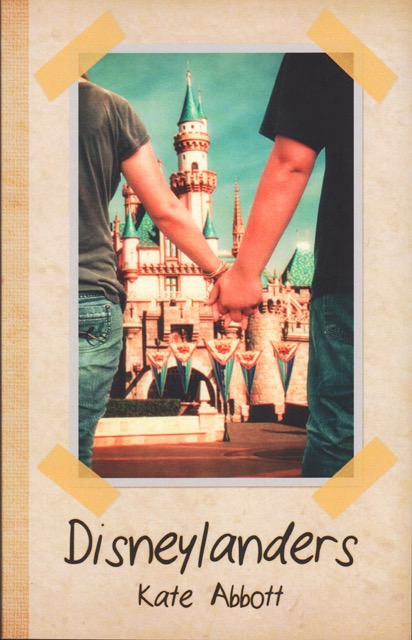 George: Disneylanders is a novel aimed specifically for the tween/teen age group. But don’t let that deter you in any way. We’re introduced to Casey who’s travelling to her favorite place in the world, Disneyland, the year before she enters high school. She’s lost her best friend who usually goes with her family to Disneyland and she finds herself wondering how much her life is going to change. As the story unfolds, we see Casey, so unsure of everything in life, feel completely at home at Disneyland. As expected, everything changes.

Jeff: From there, you’ll find yourself in familiar territories in stories such as this. However, Kate manages to make a tale you may have heard before in other books fresh and interesting. Despite never having been in the same position that Casey was in, I found myself being able to relate to her feelings of being unsure of what life holds ahead for her more often than many other books! Like George said, this book is aimed at the tween/teen age group, but we’re both manly enough to admit that that didn’t stop us from enjoying it.

George: It’s a great sign in a book when Jeff and I talk about it while we’re reading it. Usually, we don’t discuss a book until we’ve finished it and are reviewing it. This time, we were so fully engaged with the book that there were constant queries of “have you made it to this point” and “did you read this, yet”. The characters were extremely well fleshed out and the scenes felt real as you read them. One of the nice things about Kate’s style with Disneylanders is that the scenes, like Disneyland, enfold you. You can see (and smell) Disneyland in this book. There were just a few minor issues in the book, but they were completely overcome by how well it’s written and how faithful to Disneyland that Kate is.

Jeff: Technically speaking, Disneylanders is a period piece, taking place the summer after Disney California Adventure opened. Like I mentioned, Kate did an excellent job of getting the details right, especially for a specific time period. She used the Disney Parks to enhance the story, and not as the highlight of it. I was particularly impressed with how well-rounded the characters were, much like George said. My only issue, if any, was that it seemed to hint at more of a back story for some of them that we never got. It actually left me wanting to learn more about these characters we already knew a lot about!

George: I agree with Jeff. I really felt like there might have been some deeper Disney connections with one of the main characters that we never got to explore. That being said, this is a really fun read that is going to attract more than just the target audience of tween and middle-aged readers. Adults are going to be engaged by the title and might learn a thing or two. Speaking as a parent of a fourteen year-old, it was a good reminder of how challenging those years can be.

Jeff: Speaking as a person who still has the mind of a fourteen year old, I agree! I definitely recommend Disneylanders if you’re looking for a great, quick, summer read!

Are you going to add Disneylanders to your pool-side reading list? What do you think about books that take place at Disney parks?

3 thoughts on “Disneylanders by Kate Abbott, a Book Review”