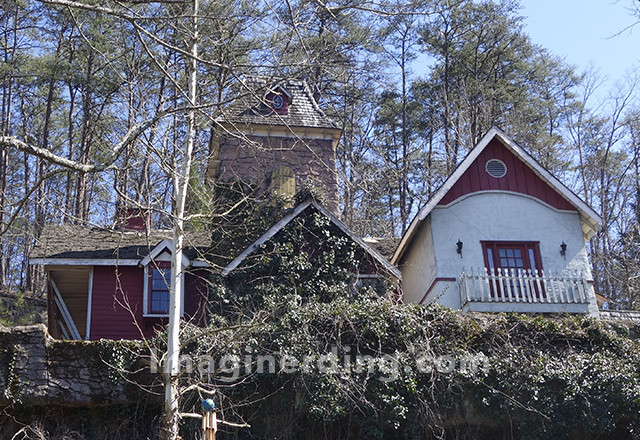 I started researching the history of Dollywood before my recent trip and I’ve been pleasantly surprised by its rich history. (Check out the history of Dollywood we did on Communicore Weekly.) Before Dollywood became Dollywood, it started out as Rebel Railroad (1961). There were several name changes over the years before Dolly Parton joined Herschend Family Entertainment in 1986 to create Dollywood. After Rebel Railroad, it was known as: Goldrush Junction (1970); Goldrush (1976); and Silver Dollar City (1977).

On my last trip, we crisscrossed the area between Riverton Junction, The Village and Craftsman’s Valley throughout the day. I knew about the mansion on the hill from some of the research that I’d done, but I was surprised at the theming located underneath the mansion. 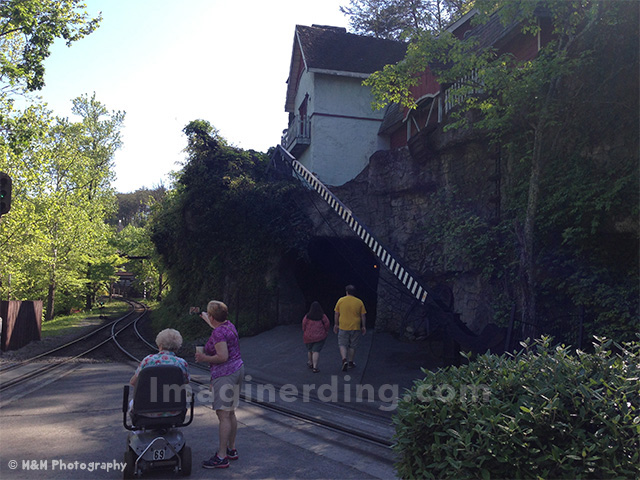 The building was added during the time it was Silver Dollar City. and was actually located near the front of the park. Based on early brochures and maps, the train tracks were the boundary of the park and the only way to get between Craftsman’s Valley and the Village Square.

It was called the Inventor’s Mansion. From a Silver Dollar City Brochure:

Then expect the unexpected in The Great Inventor’s Mansion. Rooms tilt and sway. Water runs uphill!

I pulled the following images from Theme Park Review.

It’s hard to see in the image above, but the Inventor’s Mansion is right under the Silver Dollar City text. 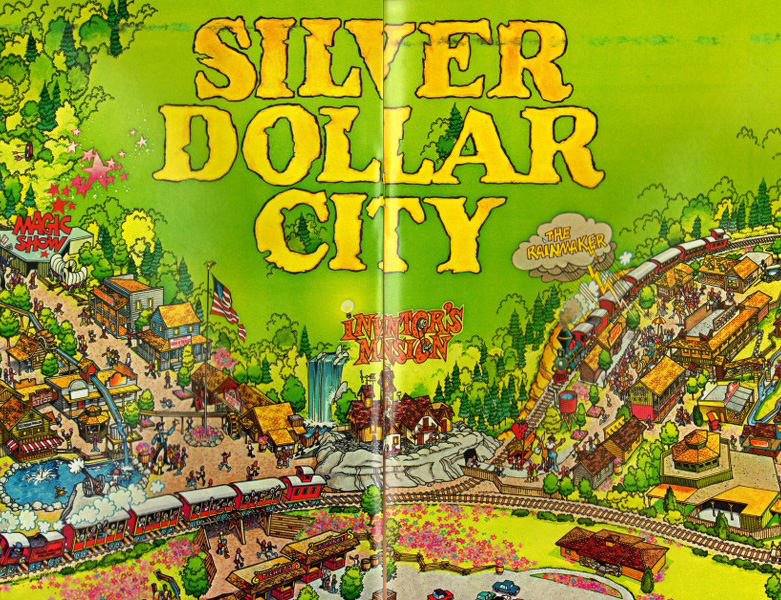 You can see from the illustrated map that you walked under the Inventor’s Mansion to travel between the two sections of the park.

In the image below, the red arrow points out the mansion and you can see how most of Riverton Junction (in the brown/orange color was the former parking area and turnstiles for Silver Dollar City, Tn. 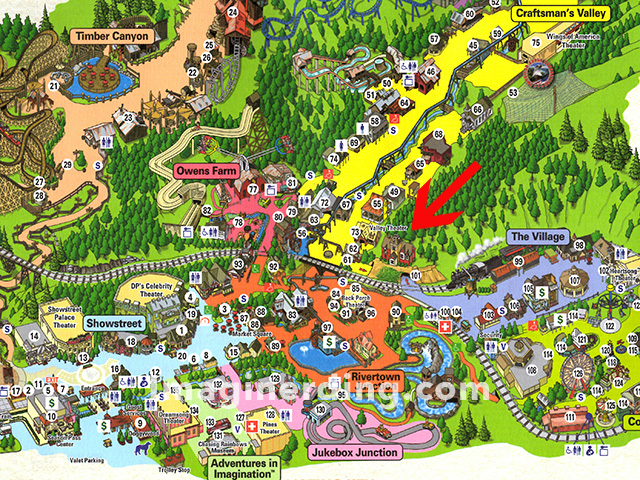 When Silver Dollar City, TN. became Dollywood, the Inventor’s Mansion was turned into a museum about Dolly Parton called Rags to Riches.

You can see the entrance to the tunnel underneath the mansion. 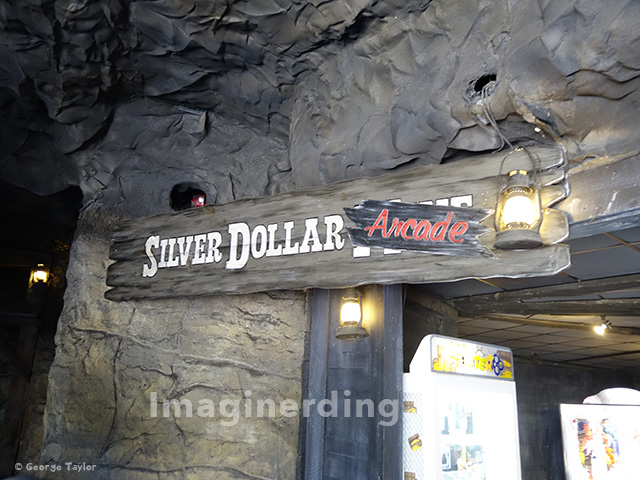 Besides the wonderful cool air that greets you, the first thing you run into from the Village side (where the train tracks are) is the Silver Dollar Arcade. There are a handful of arcade games in the small room.

As you pass through the tunnel, you see a tableau on the right. 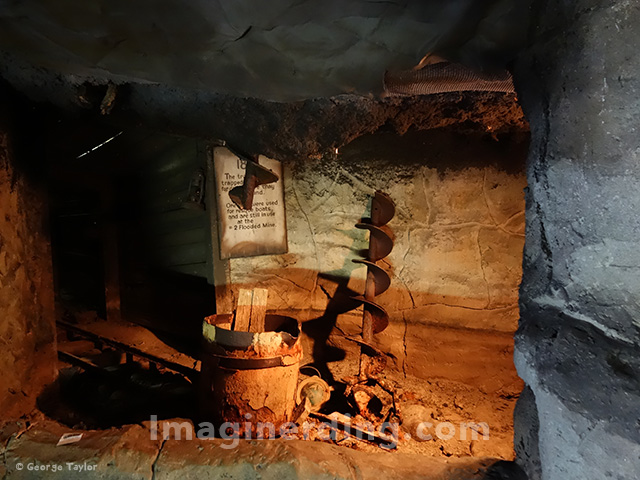 It’s hard to make out, but you can see tracks on the ground. A post online referred to this area as leading to a maze of tunnels under the mansion that eventually lead to a waterfall behind the Inventor’s Mansion. 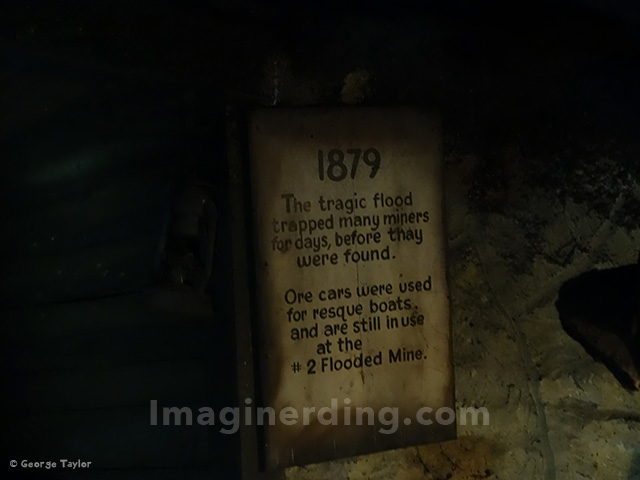 1879—The tragic flood trapped many miners for ays, before they were found. Ore cars were used for resque [sic] boats, and are still in use at the #2 Flooded Mine.

Obviously a reference to the Flooded Mine attraction that existed until 1997. 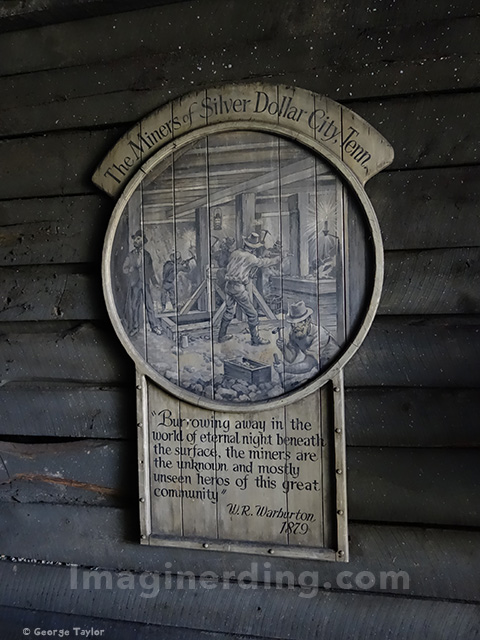 On the opposite side of the tunnel is a display honoring The Miners of Silver Dollar City,. Tenn. 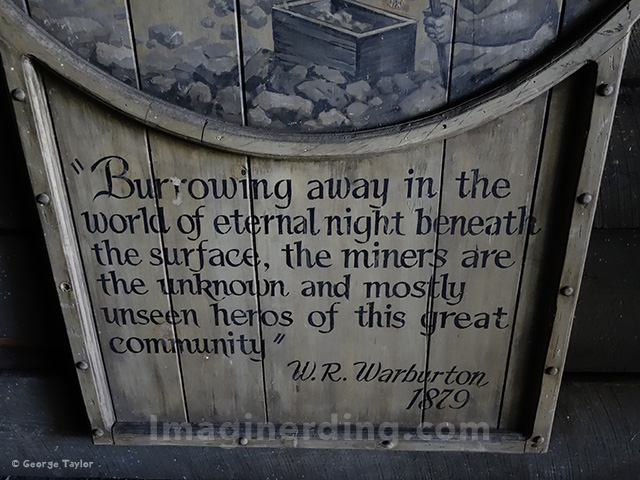 “Burrowing away in the world of eternal night beneath the surface, the miners are the unknown and mostly unseen hero of this great community” – W. R. Warburton, 1879

The only reference I could find to this quote is from a May, 1919 National Geographic article about Pennsylvania entitled “The Titan of America”. The quotes shares the first part of the phrase: “Burrowing away in the world of eternal night beneath the surface, the miners are…”.

There is a W.P. Warburton that’s the warden over st Silver dollar City in Branson. I wonder if W.R. Warburton was the warden for the Flooded Mine in Tennessee. The Silver Dollar City era was touted as being from the 1870s, so the timing on the plaque fits. 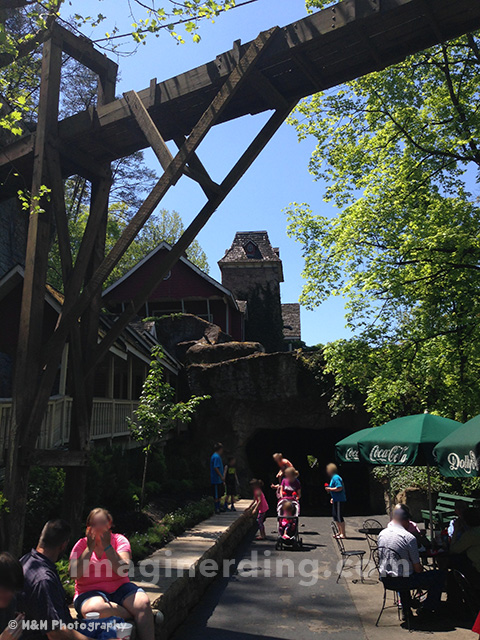 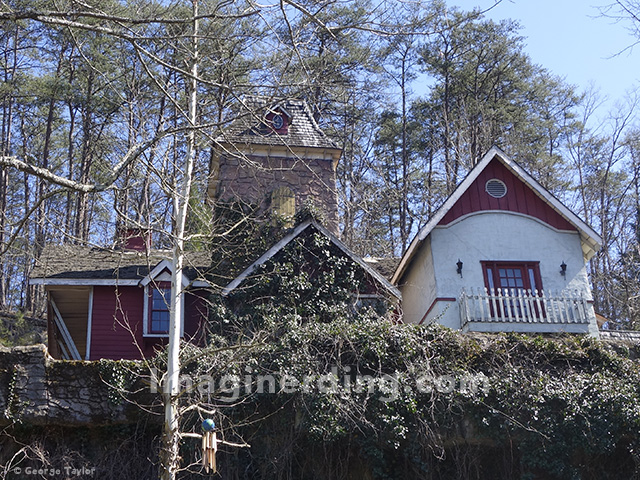 My friend told me that there was a video game museum in the space last year.

Anyone have any memories of The Inventor’s Mansion? Did you get to experience anything else in this area?

3 thoughts on “What’s that Building on the Hill at Dollywood?”