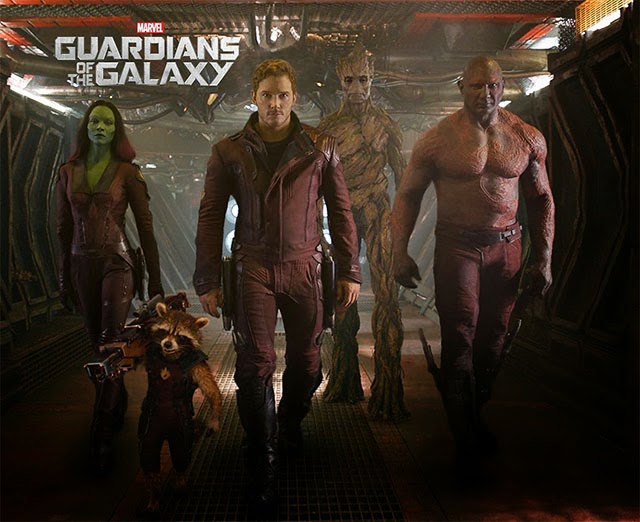 We saw a regular showing of Guardians of the Galaxy Saturday afternoon. I’ve stayed away from most reviews and websites in order not to learn anything that could ruin the film. So, no spoilers here!

The short review: we loved it and left the theater really excited.

The theater was at least 80% full, which was a great sign. I’d always heard that films released in August and February were expected to not do well, so I wondered why this film was being released so late in the summer. Talking to some friends, we agreed that there hadn’t been any releases this summer that we were excited about until this film. From the trailers, it looked like it was going to be a light and funny romp with a side-crew, so to speak, of the Marvel/Avengers universe. Chris Pratt’s character on Parks and Recreation is a charming bumbler and I assumed his portrayal in Guardians would be similar.

A co-worker and I have been talking about this movie for a while and we both assumed it would be a comedy in the midst of the darker Thor and Captain America films. Sort of like a palate cleanser. I was extremely surprised by the depth of the stories and the development of the characters.

As in the other Marvel films, the special effects were top notch. There wasn’t a single moment in this film that wasn’t photo-realistic and completely believable. The movie never slowed it’s pace and offered great one-liners and dialog between the characters. Although parts could be seen as a little formulaic, it was still an incredible ride that had the audience laughing in all of the right places and glued to their seats for most of the film.

If I have one complaint about the movie, it’s that it was simply too dark and most of the space scenes were very dark and seemed almost monotone. A major fight scene was so dark that I had problems keeping up with the action.
Guardians of the Galaxy is as violent as the other Marvel films of late. It’s not a bad thing, but it felt like it was marketed more as a comedy and anyone not prepared might be thrown off a bit.
One thing that surprised my wife and myself has been the high caliber of talent that has shown up in the most recent films. Glenn Close and Robert Redford brought a certain decorum to the films. John Reilly brought a wonderfully comedic role to the screen that could have been a simple throw away part. Of course, I was wondering how Amy Pond, er, Karen Gillan would show up in the movie. A far cry from her role in Doctor Who, Karen showed that she can be a bit more forceful and action-oriented. And a lot more blue.
We left the theater pretty excited and talking about the next film and how the story line might proceed. The eleven year-old thought it was spectacular. I have to agree. It’s definitely worth seeing on the big screen.
But, there’s no real need to stay till the end of the credits. Usually, you get a teasing glance at the next film, but this seemed more like a straight comedy bit. Although, there’s really no telling!