In the early days of EPCOT Center, Disney had a lot that needed to get accomplished in regards to PR about the park. One of the features of Spaceship Earth was Earth Station (where Project Tomorrow is currently). Earth Station was the first Guest Services area for EPCOT Center and it was also an orientation center for the theme park with seven large video screens that previewed the attractions and pavilions.

In 1982, computers were still a mystery to most people. Another thing that Disney wanted EPCOT Center to do was educate people on how computers could be used in every day situations. Of course, getting people to use, or touch a computer was a more difficult process to do in 1982. So, what does Disney do? They created the Worldkey Kiosk system. It was a group of touch-screen computers that would show you laserdisc-based videos of attractions and pavilions, allow you to speak directly with a castmember via video chat and the only way to make a dining reservation. 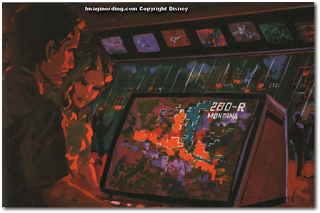 Yes, the only way to make a dining reservation at EPCOT Center in the early days was to use the WorldKey Kiosks. More often than not, the dining was booked by 10:00am that day. What a better way to introduce people to what a computer can do, right? So, if you didn’t spend the time in the morning waiting in Earth Station to use one of the WorldKey Kisosk, then you might be saddled with eating from one of the more crowded quick service restaurants.

In 1994, Earth Station closed to be replaced by the Gobal Neighborhood. Disney built a new Guest Relations building and they relocated the Worldkey Kiosk terminals to the left side of Guest Relations. From what I can surmise, the kiosks were in use until about 1997.

UPDATE: Mister EPCOT on twitter posted that the WorldKey Kiosks closed on March 21, 1999. 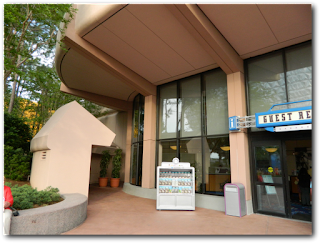 The kiosks are still there. If you head down the covered area you will see a nice sitting area.

You can still see the detail of where the kiosks were. I assume that they are still back there, boarded up behind the wood panel. The next time you are at Epcot, meander on over to the WorldKey Kiosks and see if you can finally snag that reservation for Le Cellier Cafeteria.