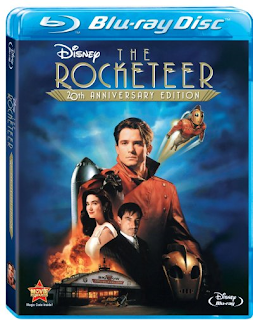 It is hard to believe that it has been 20 years since The Rocketeer exploded across theater screens. Disney had high hopes that a franchise would ensue, but the box office wasn’t enough to spur further development. A shame, really, because The Rocketeer would fit perfectly into today’s Marvel Universe, even though there is no direct relation.When we sat down to watch the film, I was surprised that my enthusiasm didn’t transfer to my youngest child. He is a major superhero fanatic and I assumed that he would be spellbound. I mentioned that the same guy who made the Captain America movie also made The Rocketeer (Joe Johnston) but he was still reticent. So, I used my parental powers to tell him that he had to watch it for the first 15 minutes or he couldn’t play his video game. It barely took ten minutes to get him hooked. Suffice it to say, he was fashioning his own back pack-style jetpack and vaulting from couch to couch after the film. Here is his mini-review:

The Rocketeer was one of the last, big blockbusters from the pre-computer graphics era. It holds up surprisingly well and looks fantastic on Blu-ray. The image is crisp and the sound is crystal clear. I was expecting the kids to laugh at the non-digital special effects, but the physical stunts and effects were so well done, that it came across rather seamless and better than I remembered. There were only a few times when a flying scene looked matted.

Although it is purported as being the 20th Anniversary Edition, there is nothing special outside of the film, itself. There are no featurettes and no making of specials. The only extra is the 1991 theatrical trailer and it looks like it was recorded on a VHS camcorder while in the theater.

This is a definite buy. Considering that most previous releases were panned for being muddy, this is your opportunity to own a great copy of an extremely underrated and exciting film.

One thought on “The Rocketeer on Blu-ray, a Review”