Skip to content
Cars 2 debuts on Blu-ray just in time for the holiday season. Does it fare better on the home theater front than it did in its theatrical release? 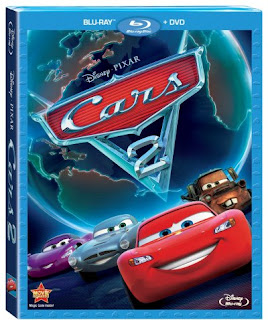 Cars 2 was the critics’ whipping boy during its initial theatrical release. We saw it in the theater and enjoyed it, but the film couldn’t hold a candle to Thor and Captain America for our family. Cars 2 has a lot of action and is a stunningly gorgeous film, but it seemed as formulaic as any fish-out-of-water story that we had seen before.
When we received our review copy, everyone was excited to watch it. The film was beautiful in the theaters, but seeing it in hi-definition with the blu-ray edition was even more dazzling. By far, the most enchanting parts of the film were the night races in Tokyo.

With a second film in a franchise, the filmmakers are able to let the characters stretch and put them in different situations. Mater really steps up and is the central character, yet it is just gag after gag about his lack of intelligence. The first Cars film was about Lightning McQueen discovering himself. Cars 2 is about McQueen discovering that he is alright with who Mater is.

My major gripe was the violence perpetrated on a few of the characters. We are introduced to a world where cars, boats and planes are living with human characteristics. One character is crushed by a compactor and another one is tortured. It was fairly off-putting to me, but my kids didn’t seem to notice. I guess that is what they call desensitization.

Cars 2 is an action film, though and through. Boys are going to love it; spies, chases, explosions and humor round out most of the film. Although, I hear that the Good Ole Boy Network is contacting a lawyer about a defamation suit, or something. Apparently, Mater is not the best image of a Southern person. 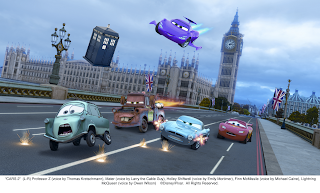 It is still puzzling that Disney doesn’t seem to offer a standard package with Blu-ray releases. The only extras included are the two short films and the director’s commentary. With an initial release, there is probably no need to add anything extra, since the film should sell itself. I hope we have some good documentaries for the 45th Platinum, Smell-O-Vision version. “Hawaiian Vacation” was just as charming as it was in the theaters. The Pixar short film is still a fantastic medium. “Air Mater” was a typical Cars Toon short that follows a day in the life of Mater and the incredible adventure he falls into. As expected, it was a direct tie into the upcoming direct-to-video Planes film. There is some self-deprecating humor at the end of the short, though. My eight year-old has watch “Air Mater” countless times. Not sure what that means…After viewing the movie on blu-ray, it is definitely one that I am glad to own and that will get repeated viewings in our household. It is obvious that Pixar is able to create gorgeous worlds and they are still the masters of digital animation. It is a compelling story; I just appreciate Pixar more when they are producing more original content and not working on sequels.