Skip to content
The Starcatchers are all but gone and an evil has invaded the Royal Family. Who will step up to secure the last remaining starstuff before it can be used for nefarious purposes? The fourth installment in the Peter and the Starcatchers series broadens the story, introduces familiar characters and offers new story elements. 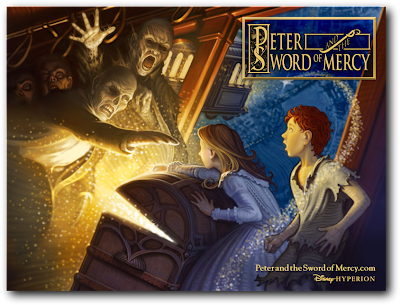 Peter and the Sword of Mercy (Starcatchers) by Dave Barry and Ridley Pearson. 2009. 528 pp.

Barry and Pearson take us 20 years past the events in Peter and the Secret of Rundoon. Molly is married to George Darling and they have three very familiar children: Wendy, John and Michael. Ombra is still in the picture, but in a much different form. Ombra is looking for some very special starstuff to help him return to his corporeal articulation. The Starcatchers have faded and one of the Lost Boys is looking for people who have gone missing all over London. Wendy discovers that she must take the mantle of Starcatcher and find a way to Mollusk Island and reaching Peter.

The authors weave historical context into the story with the Sword of Mercy, an actual piece of the Crown Jewels. The direction of the story is laced with fragrances of the Da Vinci Code and National Treasure, which adds intrigue and suspense. Barry and Pearson continue their saga with another page-turning, historical adventure.

As with the previous novels, there are several villains that are downright frightening. The story is compelling, but the nature and actions of the malefactors clearly push this book into the young adult arena. Although, I do suppose that younger readers do enjoy getting frightened from time-to-time.

Peter and the Sword of Mercy is a fantastic addition to the Starcatchers series. Originally, the series was meant to be a trilogy, but outcry from the fans convinced Barry and Pearson to continue the story. You will want to read the previous installments before The Sword of Mercy, but it is a fun journey.