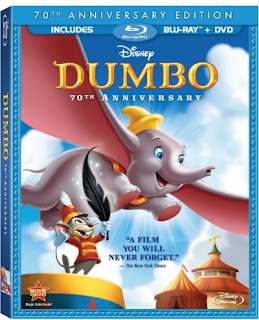 It can be difficult to review a cherished and well-loved film. What else could I say that wouldn’t rehash what so many other writers have done so well? Regardless, the opportunity to own a hi-definition copy of Dumbo is hard to pass up; even if you bought it on videotape and DVD.

Dumbo, a film that has entered the lexicon on so many experience levels, has received the Blu-ray treatment in time for the 70th anniversary of its release (1941). Besides the stunning visuals and sound, this is the same movie that is synonymous with Disney and family entertainment. Allow me to skip any pretense of reviewing the film and look at the bonus features.

After the disappointing release of the  Fox and the Hound (with the meddling midquel) that lacked any special features, I am glad to see Disney offer some enthusiastic extras. Disney has included a deleted scene and a deleted song which are introduced by Don Hahn. Don provides some great historical acumen on the pieces and it is easy to see why they were not included in the film. After seeing both scenes, it isn’t hard to see how a slightly different Dumbo could have come forth.

Here is the rundown of what is on the Dumbo Blu-ray combo:

Blu-ray:
Everything on the DVD plus:

What I loved about the Taking Flight: The Making of Dumbo featurette was that so many of the bloggers that I read (and feature on the Geek-End Update) were asked to speak about the film. Didier Ghez from Disney History and Paul F. Anderson from the Disney History Institute were just two of the familiar faces. Historian Paul Sigman offers insight as does animator Andreas Deja. It is really a great introduction to the Studio during the late 1930s through the premier of the film.

As I have intoned with most of my other Blu-ray reviews: seeing the film in hi-definition with fantastic audio is worth purchasing the film again.