Earlier, we looked at the 1971 and 1976 maps that were presented in the Story of Walt Disney World guidebooks.

Since this map was released during the first phase of Walt Disney World’s development, you can see some areas that might look unfamiliar or not quite right. Let’s put on our theme parkeologist hats and take a closer look at the Bay Lake area.

One of the more familiar un-built hotels is the Persian Hotel located on the western shores of Bay Lake near Tomorrowland. A spur line for the monorail would have been the main route for hotel guests.

The next area is known as the former site of Discovery Island. Unfortunately, the binding of the book prevents a great scan, but you can still see some interesting detail. 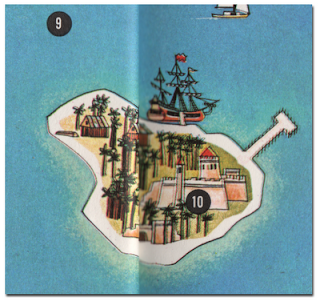 Some of the obvious features of the island include a pirate ship, Spanish-style fort (very reminiscent of the Castillo Del Morro, which would be built a few years later at the Magic Kingdom) and a “cabin” next to an beached boat. From what we know of the island’s history, the name Blackbeard’s Island was followed by Treasure Island and ultimately Discovery Island. You can read more about Discovery Island, here. 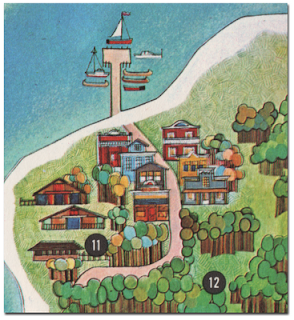 12.  Fort Wilderness – 600 acres of campgrounds among the beautiful cypress, pine and bay trees of central Florida. Sites are available for campers, trailers and tents-seven day limit. Many planned recreation activities-nature trails, boating, campfire programs. Free transportation to the Magic Kingdom. Sorry, no private boats or pets allowed-pets can relax at the Kennel Club. 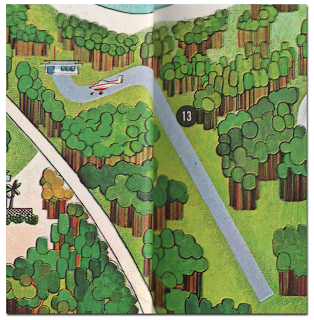 Michael Crawford from Progress City, USA has the penultimate article on the STOLport. STOL is the acronym for Short Take Off and Landing. This would have been the preferred point-of-entry for most guests. 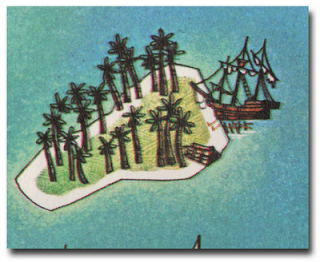 A final point of interest on our 1971 map is the island that still exists today, but acts more as a buffer between the Wilderness Lodge and the former Discovery Island. There is no designation for it on the map, but there is a pirate ship (assumed) moored on the eastern shore of the island near a dock. There is also a pile of logs that could be a cannon emplacement. A glance at the larger map shows a treasure box and flag on the larger island in the Seven Seas Lagoon and a barrel and boat on the smaller island.  Was this a plan for a larger themed area or just the artist’s attempt to create more visual appeal? Would this have been part of the story line of the World Cruise or similar jaunts? I can imagine how exciting it would be to catch a glimpse of a feared pirate ship while on your way to the Magic Kingdom.

4 thoughts on “The 1971 Walt Disney World Map: A Detailed Look at Bay Lake”