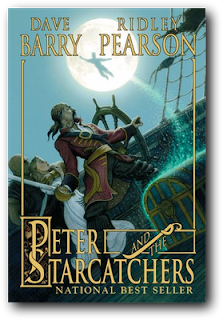 Peter and the Starcatchers by Bave Barry and Ridley Pearson. 2004. 464 pp.

This book was a fantastic read!

I missed Peter and the Starcatchers when it was first released in 2004 since I assumed it was just a young adult fluff piece. Besides, how could you tell a story about how Peter Pan met Captain Hook and became mortal enemies? Wouldn’t sticking to J.M. Barrie’s original story be too confining?

Was I ever wrong…

Barry and Pearson weave a compelling and intriguing backstory for Peter Pan. All the characters from the Disney film are there, just in a different form from what we know today. The authors also spend some time in the literary version of Barrie’s play/novel and do a fantastic job of mixing the sometimes disparate worlds.

They perfectly captured Captain Hook’s voice and stylings from the film. You can hear Hans Conried’s ostentatious bellows and calls for Smee throughout the dialogue. The other characters evolve more slowly, but you see flashes of them throughout the book that intone their future selves.

If you are a fan of the 1953 film, then you owe it to yourself to read this book. The authors breathe excitement back into the series by introducing a palpable reason for the existence of Peter Pan, Captain Hook and Tinker Bell. There can be some fear when an author introduces a back story. Remember when Lucas destroyed the Star Wars saga by explaining the Force as a symbiotic relationship between the Jedi and midi-chlorians? Fortunately, Barry and Pearson offer a much, more plausible reason for everything that we know and love about the Peter Pan mythology.

This book is a real page-turner and you will find yourself wanting to read just one more page before stopping. Even though it is a young adult novel, this is something that everyone will enjoy. Be forewarned, there are some dark moments and the characters sometimes display a penchant for violence and subterfuge.

2 thoughts on “Disney Book Review: Peter and the Starcatchers”