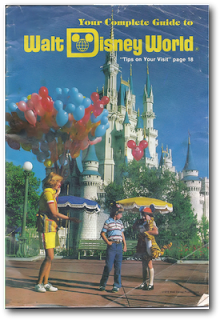 How Walt Disney World promoted itself, even before ground was broken, has always been an issue.

Is it going to be like Disneyland? Where’s EPCOT?

The Livin’ Is Easy

Disneyland was an easy commodity for Walt Disney to foster; he had television and a captive audience for the medium. Imagine having one of the highest-rated shows with the nascent industry and being able to broadcast your message with the fealty of the Disney name. Today, it is called synergy and is bemoaned by most Disney fans.

The concept of Disneyland in 1954-55 was fairly simple. You had a handful of different lands based on segments of the weekly television show. The names of the lands were simple and very telling. How hard is it to hazard a guess about what is in Frontierland or Fantasyland?

So, take a brand new idea that has never been done anywhere else in the world and try to explain it. Especially an idea that encompasses over 30,000 acres. “Your Complete Guide to Walt Disney World” was a booklet that was published several times a year and was typically sponsored by a film company (Polaroid, GAF). The information stayed true throughout most of the different versions, only changing the covers, the ads and new attractions. What interests me about “Your Complete Guide to Walt Disney World” is the way in which the property was promoted. As with most official Disney publications, pre-Eisner, there was never an agenda for hiding anything or a reason to put too much of a PR spin on what the guests saw.

The first map, which appears on the inside cover along with a description of the transportation schedule, provides a very basic and simple look at the Vacation Kingdom.  Everything is fairly delineated and there is a conscientious choice to only use black and yellow in the map. Also, each area is represented by one major, iconic item: Cinderella’s Castle for the Magic Kingdom; the railroad for Fort Wilderness; the Captain’s Tower for the Village; and one building per hotel. It is interesting to note that Pioneer Hall and Empress Lilly are notated on the map since they would have been destination dining events. Consider that this map is devoid of any activity or transportation.

The second map is of the Magic Kingdom, herself. It appears on the gatefold after the description of every land and attraction in our beloved Magic Kingdom. The first thing that I noticed is that we are presented with a fairly accurate look at the footprint of each attraction. You can see the shape and relation of each show building, restaurant and shop. The exceptions being 20,000 Leagues Under the Sea, Space Mountain and Tom Sawyer Island, where there is a graphical representation of the ride/area. Note that the area for the queue to Space Mountain is shown.

Another surprise is that the entrance to each attraction is labeled with a caret or a lower-case v. How odd that they felt the need to explain where the entrances were. Was this a frequent question at Guest Services? Were castmembers finding guests trying to enter through the exit? By 1980, the design of the map would remain the same, minus the colors and outside-the-berm footprints. Later iterations of the map would highlight the lands with large swatches of color, as opposed to highlighting individual attractions.

The Vacation Kingdom of the World

The third map appears immediately after the map of the Magic Kingdom. By this time in the booklet, Disney offers us a very stylized overview of Walt Disney World that is meant to point out the breadth and depth of recreational activities. And how much fun it will be! Some of the activities that are given focus: tennis; golf; boating; swimming at River Country; and the Polynesian Luau.

This style of map has been used by Disney since pre-opening (like this very similar 1976 rendering) and was akin to the one from Widen Your World that was featured in the Polynesian and Contemporary hotel rooms. It is almost as if Disney is saying, “You made it this far, we think you can handle seeing everything else we have to offer.”

Take a few moments and click on each map. Try and discover how different areas were presented. In the second map, pay heed to the size of the buildings. Did you ever think the show building for it’s a small word was so big? In Pirates, the drop signifies the fact that you are going under the railroad. If you look closely at the show building, at least half of it is for the queue. Make sure to find the Swan Boat Landing. Also, there is only one attraction on the Magic Kingdom map with its name in quotes. Can you find it? Why do you think it would have its name in quotation marks?