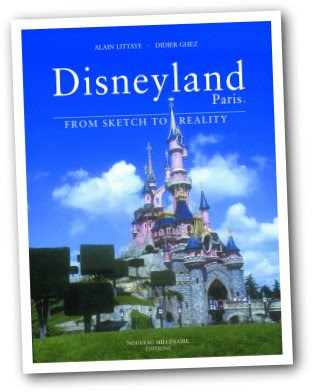 Alain Littaye and Didier Ghez are renowned for their books, blogs and research on the Disney Company. Alain runs Disney and More, a blog that focuses on concept art, theme parks and more! Didier runs The Disney History blog. You can find information about new books, rare photos and links to other great blog posts. Didier is also the author of the acclaimed Walt’s People series.

I wish that every Disney theme park had a book like this written about it. The subtitle says it all: From Sketch to Reality. There are thousands of photographs, sketches, concept artwork and aerial photos–more than you can imagine.

If you ever run across a copy of this book–get it!

What makes this book so amazing is the access that the authors were able to procure. I asked Didier about the experience of writing and researching this book.

George: How did you get involved in the writing of Disneyland Paris – From Sketch to Reality?

Didier Ghez: I have been interested in Disney since I was a 7-year old kid and in Disney history since I was a teenager. I had interviewed quite a few Disney artists before I was 20 and had attended quite a few of Disneyland Paris’ press events from 1991 (1 year before the park opened) onwards, writing articles for US magazines like StoryboarD – The Art of Laughter or the NFFC magazine Fantasyline. I am French and had been born in Paris, so as a Disney enthusiast my interest in the park and in the artists who had designed and built it was a given.

In 1997 another Disney fan, Alain Littaye, contacted me to find out if I would be interested in working on a book about the creation of Disneyland Paris. It would be a large, heavily illustrated art book. Alain would do the design of the book, contribute. I would do the many of the photographs and potentially finance the whole project research and write the text. Needless to say I was interested.

It took us no less than 2 years to get the authorizations from Walt Disney Imagineering, Disneyland Paris and Disney Publishing to work on the book. By that time Alain had decided to create a publishing house especially to release the book (Nouveau Millenaire Editions). Getting the authorizations to meet the Imagineers was far from a simple process. At one stage, when we thought that everything was lost, we knew that the only thing that might help us would be for the CEO of Disneyland Paris to step in and push the project. Believe it or not, on a weekend when I was doing some shopping in Paris I came face to face with… the CEO of Disneyland Paris, who recognized me (I had met him only once before) and said he would help. Our lucky star was definitely helping.

Having gotten the authorization to write the book, I was able to travel to Glendale, California in 1999 to meet with the Imagineers. Since we had a limited budget, I could only stay for 10 days. I managed to interview no less than 70 of the artists who had worked on the park in those 10 days, often starting my interviews at 7.00 in the morning and finishing them over dinner at 10.00 in the evening.

The many-hour-long interviews with Eddie Sotto and Tony Baxter remain as the most memorable. The one with Eddie especially so, as the battery of my tape recorder was running out without my realizing it and it took some tremendous efforts to understand Eddie later on when I had to transcribe the tape. His voice was so sped up that you one would have been convinced that I had actually interviewed Chip or Dale.

The year 1999 and the beginning of the year 2000 were spent writing the text of the book over long weekends. It took 2 years for Disney to approve it. Thankfully we were helped by the late Bruce Gordon who guided the revision of the text to fit WDI’s exacting standards.

Believe me: to see the book released after 5 years of hard work was a relief.

The book weighs in at an eye-popping 320 pages. It is complete and utter eye candy with beautiful photographs on every page.

After a basic introduction to the development of the of the park, the authors jump right into Main St., USA and follow each land in succession. Each chapter follows a similar pattern: concept art, development ideas, execution, design and final results. The text is very engaging and supports the photographs; you learn more about the development of attractions and lands. Each of the major attractions (Pirates, Haunted Mansion, etc.) is covered in amazing detail. The multitude of concept artwork, construction photos and rare interior shots will astound you.

The real star of the book is the photos. My favorites are the aerial pictures taken of the different lands. It is a rare treat to see a bird’s-eye-view of a Disney theme park and this book offers multiple shots for every land. Seeing how the Imagineers laid out the attractions doesn’t dispel the magic, but creates a sense of amazement at their talents. Disneyland Paris is the first Magic Kingdom-style park that the Imagineers developed, since they were previously known as W.E.D. According to many friends, authors and Disney enthusiasts, Disneyland Paris is the most beautiful of all of the Magic Kingdoms.

Sample Pages From the Book 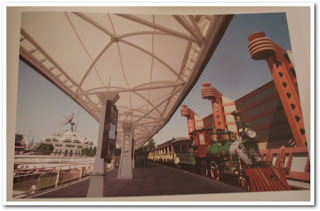 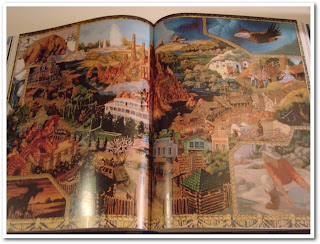 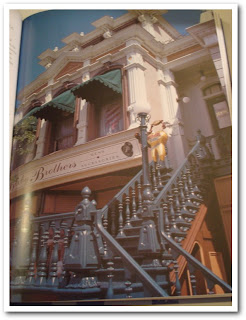 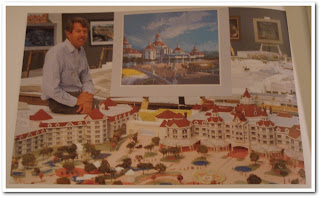 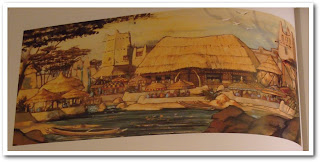 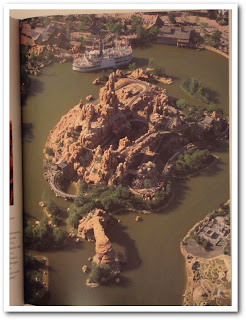 George: Are there still copies of the book available?

DG: Strangely the park does not seem to distribute the English version of the book anymore although we know they still have copies of it in their warehouse. Alain has also run out of copies. I do have a few left that I sell to anyone interested. They will probably run out soon.


George: Any other art books in the plans?

DG: Frankly not at this stage. The approval and financing processes were so complex on that book that I am unlikely to tackle another book of that sort within the next few years. Which might not be a bad thing as I need all the time and energy that I have currently available to edit and publish the Walt’s People book series.

Bottom Line: This is a must-have book—if you can find it. The images are positively breathtaking and marvel-inducing. It has quickly become one of my most cherished books. For many of us, this might be the closest we ever come to seeing a Disney theme park go from figment to reality. I wish that we could get a book like this for each of the Disney parks across the world.

4 thoughts on “Book Review: Disneyland Paris – From Sketch to Reality”