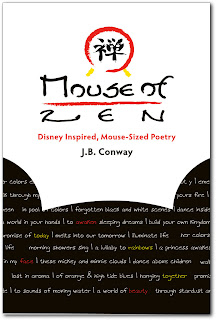 I have a lot of different books in my personal library; books about Walt Disney World, Disneyland, Walt Disney, travel, eating, cultural effects of Disney, etc. You name it and I probably have a book about it.

Occasionally, you run into something different. Something with a certain appeal. Something that inspires.

And now I get to share that something different with you!

J.B. Conway started a twitter account, simply titled MouseOfZen. He began by posting haiku dedicated to Walt Disney World. The popularity of the haiku format drew a large following for Conway on twitter and allowed him to share his love for Disney with the rest of the world.

What Exactly Is a Haiku?
A haiku is usually described as a seventeen syllable verse that is divided into three lines of five, seven and five syllables. The art form of Haiku is considered very difficult to master and is used to evoke imagery akin to the seasons and the natural world.

doombuggie awaits
consequence can be killer
without facing fears

In Conway’s book, he mixes imagery of Disney theme parks with food, weather, parenting and love.

Why Should I Buy This Book?

along wooden tracks
scent of buttered popcorn plays
about frontierland

This is a good question, and one that I am sure Conway gets asked a lot. You won’t learn anything about Disney history or why Walt decided to build Walt Disney World in Orlando. What you will do is enjoy an artist’s vision of Disney.

boardwalk all silent
captivated by starlight
in ripples of time

It is a title that you will pick up from your nightstand and read a few haiku. Then you will put it down, with a smile on your face and a Disney thought on your mind.

things are looking up
splashed with anticipation
from a mountain chill

It is a book filled with 351 tributes to Disney and Conway’s love for the Mouse, the parks and his experiences.

orange aroma
surf fades into sunset as
we glide as eagles

What I have enjoyed most about the book is trying to decipher what Conway was writing about. Sometimes it is obvious and sometimes it takes some ruminating to place the haiku.

There is a certain redolent charm that filters through the book. As the title articulates, there is an inherent zen-ness that resides within the pages.

Occasionally, the haiku are succinct and stand alone. Other haiku seem to link their lines together to tell a greater story.

There are times when the haiku takes you to a place where you wish you could be transported immediately. Haiku, take me away!

I asked Conway why he wanted to publish his book of haiku. His response bubbled down to creating a legacy for his children. He wanted to leave his kids a reminder of how much he loved them and loved sharing Disney with them.

Is this book a necessity? Not really, but it is a work of art that will stay with you for a long time. It is also a reminder of all of the reasons why we love Disney.

You can find J.B. at his website, Mouse of Zen.

*Mouse of Zen provided an ebook copy for this review.

One thought on “Book Review: Mouse of Zen by J.B. Conway”