Let’s celebrate Earth Day by looking at one of the few books that investigates and explores the making of Disney’s Animal Kingdom theme park.


October 2011 marks the 40th anniversary of the opening of the Walt Disney World Resort in Orlando, Florida. The Vacation Kingdom has seen a lot of changes over the past four decades and the editorial staff at Imaginerding wants to celebrate the unique and rich history of the resort with a series of posts. 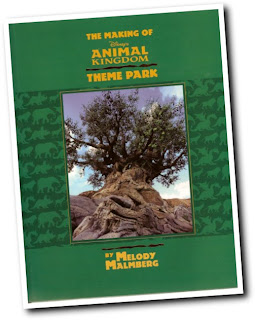 TheMaking of Disney’s Animal Kingdom Theme Park by Melody Malmberg (1998, 160 pages)
For Animal Kingdom fans, there isn’t a lot of published information that focuses on the theme park. Malmberg’s book is a rare gem for several reasons: it is an in-depth look at the creation of the park; a thorough look at the team, the political process and environmental issues; and most importantly, it is one of the few resources that looks at the step-by-step development of a Disney theme park–how it grew from a small team led by Joe Rohde to a cast of thousands.
This book reflects the Animal Kingdom in so many ways. The park was shepherded by Imagineer Joe Rohde, who had the vision and the desire to keep the project moving forward. Ms. Malmberg was able to collect the stories of the Imagineers, follow their progress and take us behind the scenes of the park. She interviewed key people that were there from the beginning: Joe Rohde, Rick Barongi and Zofia Kostyrko. You get the feeling that you were there, day-by-day, watching as they create the park. 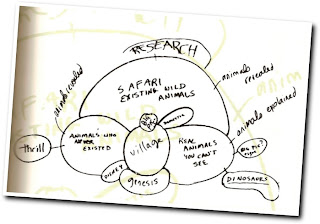 You learn, early on, that the Imagineers knew they needed one thing to make the park a success; their rallying cry was Proximity Equals Excitement! During one budget and planning meeting, the Imagineers, unbeknown even to Marty Sklar, brought in a 400 pound female Bengal tiger that walked around the conference room while Rohde spoke. The executives got the point and let the group move forward (p. 25). They were able to try and develop new means of getting the guests closer to the animals–safely, of course. 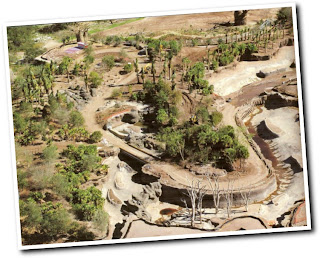 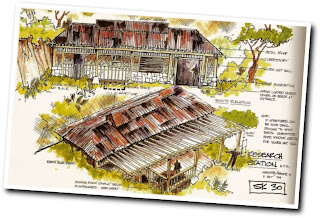 You get a detailed look at how the art (re: buildings, details, interiors, roofs, painting) was constructed using as many local and foreign talents as available. Sculptors, thatchers and artisans were brought in from all over the world. Malmberg spends a lot of time looking at the backstage care and living areas. Since Disney was creating a park that would, inevitably, be compared to zoos, there is a focus on how Disney treats the animals. The first two animals to arrive, the giraffes Miles and Zari, were greeted with tears and cheers. Malmberg goes into great detail explaining how the animals were procured, transported and acclimated to the park. 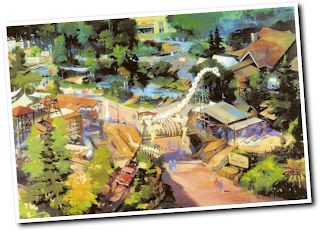 The book is filled with photos, artwork, and concept drawings. One of the final sections looks at the next few years of the Animal Kingdom. Asia is the next land planned with the river ride and the Maharajah Jungle Trek opening first. The possibility of a new hotel called the Animal Kingdom Lodge, with savanna views, is even mentioned! The very last section is a listing of all the Imagineers that worked on the Animal Kingdom. Eight pages of names.
The park has come a long way in 10 years.
Bottom Line: This is a one-of-a-kind resource for Disney fans. There is not another work that takes such a detailed look at the making of the Animal Kingdom or a Disney theme park. There is a lot of discussion about conservation and animal care–this is not a negative, but the whole work is a balanced look at the creation of the park. There are chapters dedicated to the creation of the attractions and lands, but equal attention is paid to the zoological needs of the park. There is a lot less of the geeky stuff and more a look at the animals and their care. Ms. Malmberg is able to capture the passion of those involved and it translates very well to the written word. You will enjoy this work for the vast detail dedicated to the creation of a Disney theme park. (As an aside, Melody Malmberg is married to Joe Rohde.)

One thought on “Celebrating 40 Years of Walt Disney World: The Making of Disney’s Animal Kingdom”