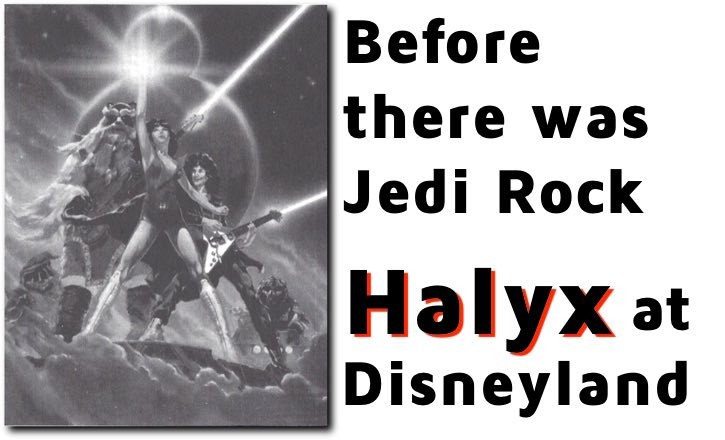 Halyx? I’d never heard about this Disney-created rock band before. Had you?

Mouse Tracks: The Story of Walt Disney Records by Tim Hollis and Greg Ehrbar is an amazing look at the music of Disney and the creation and development of Walt Disney Records. It is filled with fascinating biographies of the singers and songwriters as well as descriptions of all of the released albums.

I was pleasantly surprised and intrigued to see mention of Halyx, a modern rock group that Disney created in the early 1980s. According to the authors, Disney was trying to branch out their stable of recording artists and wanted to enter the arena of rock.

They were fun. Lora’s husband Tom was the keyboardist, and his keyboard was built into a golf cart he drove around on stage as the headlights flashed up into the audience. Roger Freeland, who was over six feet tall, wore a Wookie-like costume and wildly played bass. Tony Caputo, the percussionist, had a gymnastic rope so he could do somersaults and things. And Bruce Gowdy was the handsome leading man, sort of a space-age rock-and-roll guitarist to our Princess Leia type, who was Lora. The response of the Disneyland crowd was so phenomenal, it was causing the park a problem because they did not want people to get up and dance—it wasn’t really allowed! Their sound was of the time, the sort of legitimate pop rock you would have heard on the radio, along the lines of Kim Carnes and Blondie.

Due to various changes with their recording company, Halyx was eventually dropped from the Elektra/Asylum/Warner Brothers label before their first recording could be released.

Sit back and enjoy this live recording from Disneyland!

Did you ever get to see Halyx perform at Disneyland?