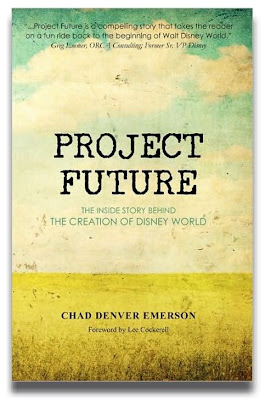 “I’m doing this because I want to do it better”, Walt Disney on the Florida Project.

Project Future: The Inside Story Behind the Creation of Disney World by Chad Denver Emerson. 2009, 185 pp.

Chad Emerson is a Professor of Law at Faulkner University. He is also a lecturer, author and consultant in the area of amusement and hospitality law. His interest in piecing together the tale of Walt Disney World began when he stumbled across information about the Reedy Creek Improvement District and his wife thought that it would make a fascinating read.

Chad took her advice to heart and began researching the book.

Most of us are aware that Walt began to secretly purchase land in Central Florida for his Disneyland East idea, which blossomed into the City of Tomorrow. Before the publication of Project Future, very few of us were aware of the political machinations, maneuverings, time and money that went into the acquisition of the land that we call Walt Disney World. Project Future has been described by other reviewers as “spy-like” and full of intrigue–they are correct, but it is also full of anecdotes from former employees and government officials.

Chad’s book fills a very important vacuum in the time-line from Disneyland’s inception until the opening of the Vacation Kingdom. The style of the book is very straightforward and most lay people will be able to consume the work without consulting a legal dictionary. The language, tone and writing are one set of the book’s strengths.

Included is a listing of key players, which is very helpful. Many times, I found myself flipping to that section to refresh what a certain player’s role was. Chad has a detailed time line that focuses on the major events of the land acquisitions and lobbying efforts.

In all, this is a pleasurable read that paints a picture of how daunting a project like Walt Disney World actually was. You will never take the 43 square miles purchased in the mid-1960’s for granted again! You will also come to realize that a project of this size and scope will never be duplicated.

You can learn more about the book by visiting http://www.projectfuturebook.com/