Long before Imagineering’s Living Character Initiative gave us Lucky the Dinosaur, Turtle Talk with Crush and Remy at Les Chefs De France, we experienced many different forms of audio-animatronics at Disneyland and Walt Disney World. More recently, guests have been entertained by Push the Talking Trash Can in Tomorrowland at the Magic Kingdom and his cousin Pipa, the Talking Recycling Can, at the Animal Kingdom.

One of the antecedents of  Push and Pipa was a nearly five-foot tall electronic robot named GYRO. Not much exists about GYRO online, but I did run across this small article and photo in the Fall 1985 Disney News publication on page five: 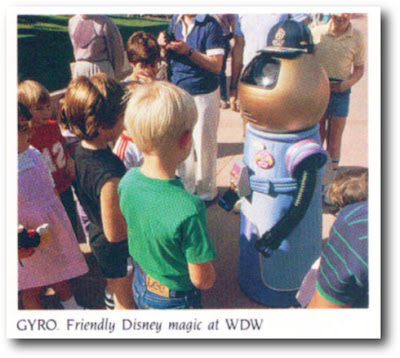 SAY HELLO TO GYRO!
What’s 4 feet 10, weighs a portly 150 lbs., has a blue body, and a golden head encasing a computerized brain that controls its electronic senses? It’s GYRO—the very latest in electronic robots. GYRO strolls about the grounds of Future World in Epcot Center at Walt Disney World, conversing with guests who marvel at its mobility and intelligence. When they ask how GYRO works, however, the robot is evasive. And because it talks, guests often stare into GYRO’s 12-inch screen of a face and say, “Okay, who’s in there?” The robot’s honest answer is, “Nobody.” Only micro chips and lots of electronic wizardry. –Disney News, Fall 1985, page 5.

When you search for GYRO on the interwebs, you run into a lot of information on Gyro Gearloose, a character created by Carl Barks in 1952 as part of the Scrooge McDuck universe. I happened to luck out with a link to the always informative, educational and entertaining site Walt Dated World. Alison has a fantastic photo on her site. Make sure you stop by Walt Dated World and tell her how much you appreciate the work she does! 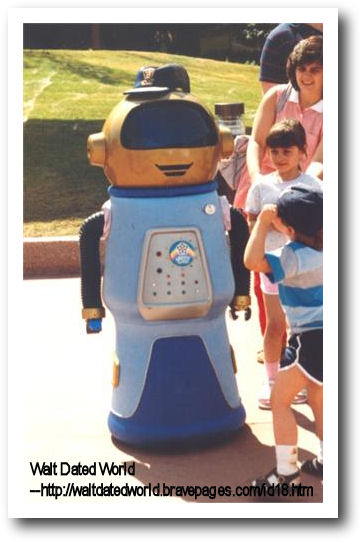 Anyone else have any shots of GYRO on the loose?

5 thoughts on “Say Hello to Gyro!”