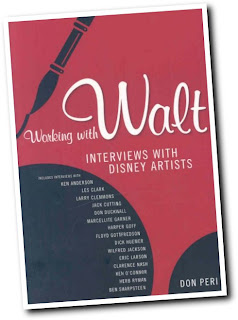 This is a quick and thoroughly enjoyable collection of interviews with 15 different artists that worked with Walt Disney at the Studios.

Mr. Peri states in the Acknowledgements that he was prompted by Didier Ghez (editor of the Walt’s People series

) to finally collect the interviews and publish them. Thanks both to Don and Didier!

Most of the interviews were conducted in the late 1970’s with artists that spent most of their career working at the Disney Studios. What surprised me at first was how the artists were all enchanted with Walt Disney; after reading a multitude of Disney biographies, you do get the sense that Walt was a benevolent dictator–but a dictator nonetheless. A majority of the artists interviewed stuck with Walt during the Animator’s Strike of 1941. If you study any work on Disney and animation, the Animator’s Strike is often seen as a watershed in the history of the Studio, prompting the mentality that Walt lost a lot of faith in his employees. With the interviews presented by Peri, you get a sense that Walt did favor the artists that stuck by him.

(Ed. by Ghez) shortly after this title. There are some similarities in the scope of the two books, but they are both valuable resources on their own. The interviews presented by Peri were done at a time when there was not a lot being written about the artists that worked directly with Walt Disney. After reading the interviews, you come away with a sense of what it was like to work with Walt Disney and to work at the Studios. I feel like I have a better understanding of how Walt worked during the early years of the Studios.

The stories and anecdotes that each artist shares are humorous, wistful and passionate. These artists truly loved their jobs and working with Walt Disney.

…he didn’t think of himself as Walt Disney. He thought of Walt Disney as an entity, an organization, and he spoke of Walt Disney as an organization, for which everybody worked and not the personal part of the name. A lot of people put Walt down because they didn’t get along with him or they got canned or they were chewed out by him, and naturally they probably make more or less severe remarks about him and understandably so. He had a great ego, and because of this ego he could overcome a lot of difficulties and obstacles because he believed in himself. He believed what other people didn’t believe, and he was proven right time after time after time, even with the bankers. Snow White was called “Disney’s Folly,” because what–an animated cartoon to run for over an hour? It’s Impossible! Nobody will sit through a cartoon that long. Well that was Snow White and the Seven Dwarves.
–Les Clark (p. 123, Working With Walt

Bottom Line: This is a wonderful resource to have at hand. It is not for everyone–you really need to have an interest in animation, the studios or what working with Walt Disney was like in order to fully realize the necessity of a title like this. I give it a high Geek Factor rating because of its focus, even though the book is extremely accessible and easy to read. But if you are interested in learning a lot about the artists, the studio and Walt Disney, this is a great place to start or to add to your collection. This book will foster a greater appreciation for the animated films and shorts. It is also one of the few places you can read the actual words of the artists that never received a lot of acclaim outside the arena of animation fans.