During my first visit to Walt Disney World in 1994, my wife did most of the planning. See, it was my first trip, after all (even though I had dreamed of going for almost 20 years), and she had been many times. One of the reservations she made was for Chef Mickey’s at the Disney Village Marketplace.

We took this picture on the boat ride from the Port Orleans Resort to the Disney Village. 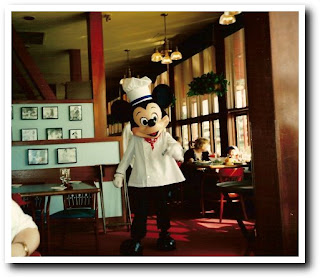 Meeting Mickey for the first time!

I still have my souvenir cup from the early evening dinner. I remember, distinctly, that I had Goofy’s Grog.

A little history is in order. The area that we know now as the Disney Marketplace started life in 1975 as the Lake Buena Vista Shopping Village. Shortly afterward, it was renamed the Walt Disney World Village and then the Disney Village Marketplace in the late 1980’s. 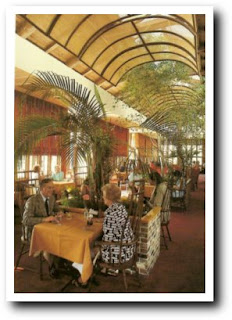 I was looking through my copy of Walt Disney World: The First Decade

and it talked about a restaurant called the Village Restaurant.

I went back to my 1989 Birnbaum’s Official Guide to see what they said about the dining experience. At that time, the restaurant in question was called the Village Restaurant:

This unassuming dining room is one of the most pleasant restaurants in Walt Disney World–and there’s no waiting since reservations are accepted. There are fine views of Buena Vista Lagoon, and the sunshine that streams through the windows keeps a whole garden’s worth of house plants robust and green all year.
–p. 196, Steve Birnbaum Brings You the Very Best of Walt Disney World, 1989.

I pulled out my Walt Disney World: 20 Magical Years

book and flipped to the very small section on the Disney Village Marketplace. It has a picture of two families placidly enjoying a meal while Mickey presides over the affair. You gotta love early Disney PR. So, sometime between 1989 and 1991, the Village Restaurant became Chef Mickey’s. I remember it being less of an event and more of a meal. They promised every dining party that Mickey would make his way around every 45 minutes. When we did ‘Ohana in 2006, it reminded me a lot of that 1994 Chef Mickey’s dinner–except for the character parade. The Chef Mickey’s of 1994 was really much more relaxed!

Chef Mickey’s moved to the Contemporary Resort in 1995. The former site of Chef Mickey’s at the Disney Marketplace site was replaced by the Rainforest Cafe shortly after that. 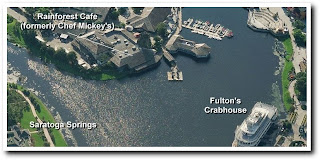 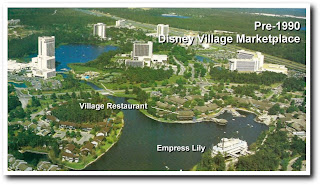