Hat tip to Boing Boing for this link to Wired.

We’ve posted before about the articles that Jeff Pepper has written at 2719 Hyperion about the World’s Fairs of 1939-1940 and 1964-1965. If you’ve been paying attention to both of our blogs, then you are aware of the importance of both of these World’s Fairs on Disneyland and Epcot. 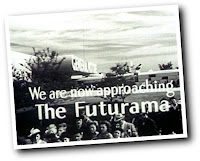 Great Moments With Mr. Lincoln, The Carousel of Progress and It’s a Small World were all rides created by Disney for the 1964-1965 World’s Fair and imported to Disneyland after the Fair. Disney also created a ride for Ford called The Magic Skyway, but Ford would not allow the ride to be relocated to Disneyland. Disney was able to bring the dinosaur animatronics to Disneyland to add to the railroad train scene after Tomorrowland for the Grand Canyon/Primeval World diorama.
If we jump back a little further to the 1939 World’s Fair, we can start to see where the Disney Imagineers found a lot of their inspiration for the Epcot Center Pavilions. I won’t go into too much detail, since Jeff has done a wonderful job of taking a look at specific attractions.

If you read Jeff’s article and then take a look at the article and videos on the Wired site, you can see the similarities between the General Motor’s Futurama Pavilion from 1939 and the 1983 Horizons Pavilion at Epcot Center.

Both Horizons and Futurama had a positive message about the future and what we could expect. In 1939, GM was forecasting that everyone would own a car and that the National Highway System would provide effortless and congestion-free transportation. To a family coming out of the depression in 1939, this would be an extremely positive message about the future. If you remember Horizons, it still looked at technology, but with three distinct thoughts. There was the historical future with very Jules Verne-inspired ideas, a whimsical look at the future from the 1950’s and 1960’s and finally, a more more modern approach using technology as a communication tool. A lot of the ideas found in Horizons dealt with technology enriching our lives, mostly through video-chat but also with advances in agriculture and technology. Life in space, undersea and throughout the earth shows that we still need technology to bring us all together.

Finally, let’s take another look at 2719 Hyperion. Jeff wrote a post back in early 2007 about his dreams for a New Horizon Pavilion. Enjoy!

Futurama graphics appearing on this post courtesy of 2719 Hyperion.

Visit The Journal of Ride Theory and Dannys Land. Dan was interviewed by Wire for the Futurama article.