2. Golf Resort Hotel – Relaxed setting featuring a bi-level clubhouse with pro shop, Trophy Room restaurant and lounge, and complete locker facilities for men and women. Many of the Hotel’s 150 rooms look out on fairways and tees of the courses; others on the pool, tennis courts and putting greens. 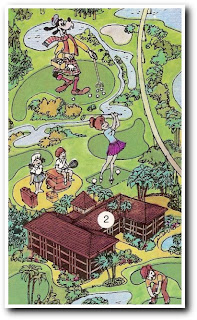 I just love the Goofy tartan. And the kids sitting on the luggage while the mom tees off.

The Golf Resort has had one of the more varied histories of any resort at Walt Disney World.

It opened in December 1973 as the Golf Resort with just 125 rooms. In 1986, it was renovated and increased in size and was renamed as the Disney Inn with a Snow White theme. Prior to the name change, many guests thought the resort was for golfers only; therefore the occupancy rate suffered somewhat. The resort was leased to the United States Government in 1994 and purchased outright in 1996. It was renamed again. This time as Shades of Green. As of a 2003-2004 renovation, it now has 568 rooms. Currently, the resort is only available to military personnel, civilians from the Department of Defense and the National Guard. The room rate is a sliding scale based on rank and pay. Pretty cool!

Now, if only they would create a Librarian’s resort. We could call it Shades of Dewey…or In The Stacks…or The Check-in/Check-out Motel.