During World War I, patriotism was the word of the day.

Born in 1901, Walt Disney was too young to enlist in the war effort. He watched Roy leave to join the fight and dreamed of nothing else but being a part of it. Walt heard from a friend that the Red Cross was accepting drivers and that you only needed to be 17 (Armed Forces enlistment was 18). Apparently, Walt coerced his mother, Flora, into signing the document and forging her husband’s signature. She notarized the certificate and then Walt changed the 1 to a 0 in his birth year. He enlisted on September 16th. 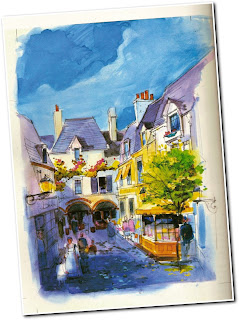 After four weeks of training in Chicago, Walt caught influenza and was sent home to recuperate. This was the great influenza epidemic that swept the United States and killed over 20 million people. He was sent to Connecticut for more training in November. During that period, an armistice was reached; Walt felt remorseful that he wouldn’t be able to take part in the war. Shortly after that, 50 members of his platoon were shipped to France.

He spent the next ten months running errands, chauffeuring officials and sketching. He drew advertising posters for the canteen, caricatures of enlisted men and designs on the canvas of the ambulances. He even mailed editorial cartoons back to his high school and to friends. He looked back fondly at that time in his life. One of his favorite moments consisted of an afternoon spent with General Pershing’s ten-year-old son, eating fried chicken, outside the birthplace of Joan of Arc, in Domremy. Walt spent most of his time stationed outside of Paris. 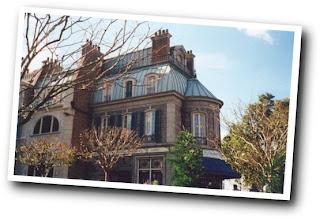 Later, in 1949, Walt spent time in England filming Treasure Island. During the five weeks he was there with his family, they visited France and Walt took them on a tour of many of the places he had served while in the Red Cross. He would later recall that the time spent in France was one of joy and sorrow.

They also crossed the border and spent some time in Switzerland. Of course, this trip predates Third Man on the Mountain, which deserves its own post entirely.