This is a continuation of yesterday’s post. Notice in the text that they refer to a Space Pavilion, which never really saw the light of day until recently. The World of Motion, sponsored by General Motors isn’t mentioned, neither is the Imagination Pavilion. Agriculture and Imagination are both referenced in the aforementioned post. I wonder what most visitors in 1982 would say about Epcot today?

Consequently, presentations vary from pavilion to pavilion. One show is dramatic, another leans more to the informative. A third is provocative, and a fourth is amusing. Some involve us as viewers, others invite our active participation. All, however, are entertaining, even while they lay before us the difficult and complex problems that face us in the world today. 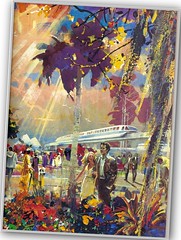 Epcot Center itself provides a brilliant illustration of the use of forward-looking systems and planning. The monorail system could serve as a model of transportation for cities; waste material from the park, as well as from nearby cities and towns, will all be burned to provide energy at an innovative pyrolysis (incineration) plant that will operate twenty-four hours a day; and the vehicles used in the Universe of Energy pavilion, powered partly by solar receptors on the roof, will move about, negotiate curves, and reposition themselves all through sensors that respond to wires in the floors, charging their batteries by induction at specified points without any electrical connections.

Nor will Future World remain static. Several displays are designed to incorporate advances as they come of age, and additional pavilions are planned into Future World’s future. Horizons, a look into the twenty-first century, is scheduled to open in 1983, and a year later The Living Seas will join the ring of pavilions. Not yet in the building stage are Life and Health, which will conduct visitors on a journey through the human body, and a space pavilion, to be realized with the cooperation of NASA, which will feature a simulated space station.

It is the wedding of history, technology, and entertainment, all displayed in a setting quite unlike any other, that makes Future World unique.

Included is the second half of the artwork by Disney Legend Herb Ryman.

Be sure to check out the Tickets, Please! post over at Walt Disneyana World. He has a pretty cool Special Edition Commemorative Ticket that he wants to tell you all about.