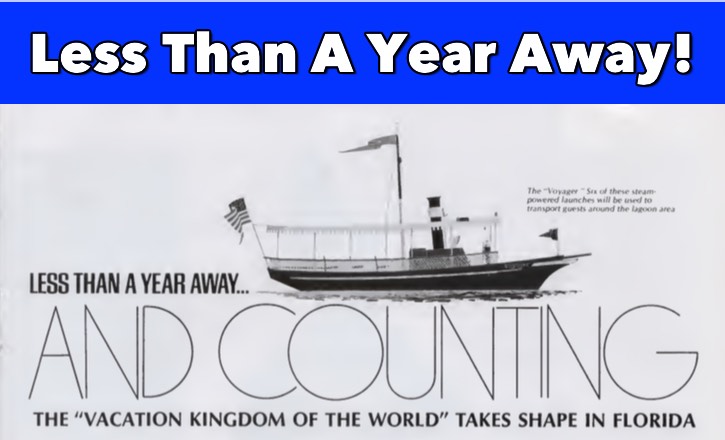 Vacation Kingdom of the World Takes Shape in Florida

The Disney News from the Spring of 1971 offers an interesting article on the construction and development of Walt Disney World. Remember, this is still about six to eight months before the opening of the Vacation Kingdom of the World. Let’s check out how Disney updated Magic Kingdom Club Families, who would be some of the most ardent Disney fans of the time. 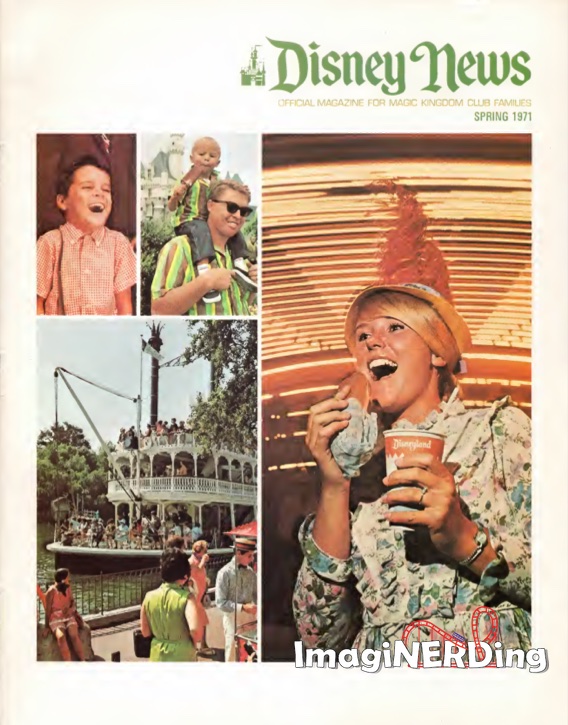 It won’t be long now. With approximately 4,000 construction workers on the job, all aspects of Walt Disney World’s 2,500-acre Phase I project are moving steadily toward scheduled completion next October.

Currently the nation’s largest non-governmental construction project, the new destination vacation resort, located 15 miles southwest of Orlando, is being built at the northern extreme of the 27,400-acre Disney property. It will include a theme park similar to Disneyland, a 650-acre lake and lagoon area, resort hotels, camping facilities, and an almost limitless variety of land and water-oriented recreation facilities.

First among the new “Magic Kingdom’s” six lands to show signs of its finished shape is romantic Main Street, U.S.A. The architectural overcoat of a bygone era is now being applied to cover the structural skeletons of modern buildings. Ornate cupolas are being framed, gracefully curved windows are being set into place, and the look of the past is coming to life again. The Main Street train station is farthest along, with City Hall, Bank, and Fire Station not far behind. The intriguing facades of the Main Street Cinema, Emporium, Penny Arcade, old-fashioned Ice Cream Parlor, and other landmarks are also beginning to take shape. 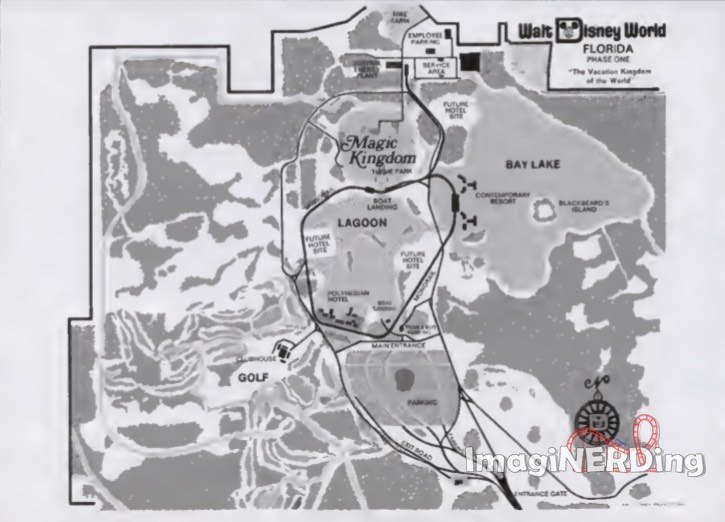 At the entrance to Fantasyland, construction on the curving battlements of Cinderella’s Castle has passed the 125-foot mark. (The magnificent spires of the castle will soar to an ultimate height of 180 feet.) And thousands of steel beams are in place — no two pieces alike — supporting reinforced concrete floors and walls. (Movie set-builders have covered the walls with a “makeup” so real that they will look exactly like granite.) 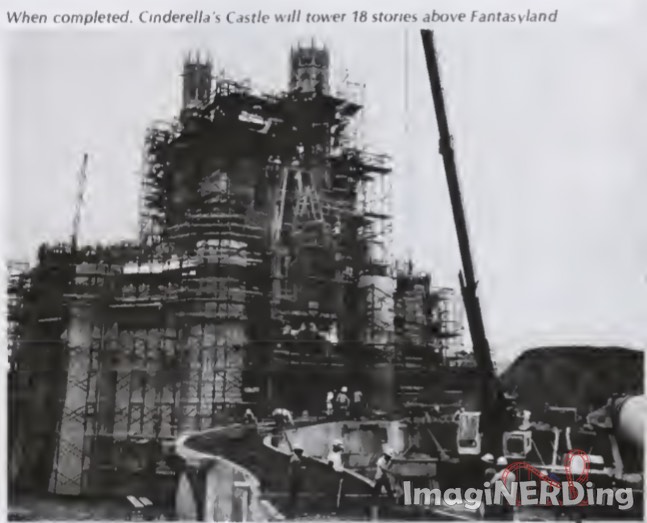 Instead of dungeons beneath the castle, workmen have completed service tunnels and storage facilities providing underground connections to many parts of the “Magic Kingdom.” 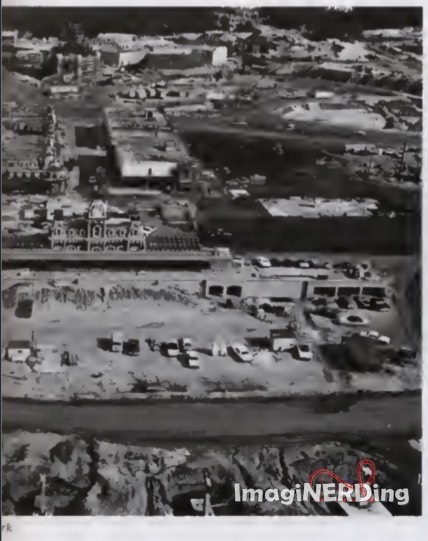 In Fantasyland itself, the building to house “It’s A Small World” is near completion, and in Liberty Square, the exterior of the Haunted Mansion is complete.

At Walt Disney World, the Haunted Mansion takes on an entirely Eastern look. Instead of a “Gone-With-The- Wind” flavor, complete with stately white columns, magnolias, and iron- laced balconies, the Florida mansion features architecture of the “early-Edgar Allan Poe” variety — a building made of granite, a dagger-shaped belfry, and a gargoyled doorway that looks like the entrance to a massive tomb. 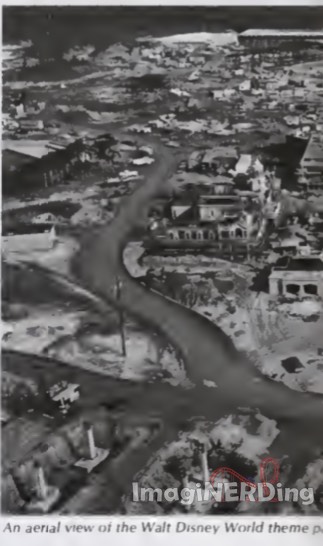 Adventureland’s Jungle Cruise river channels have been excavated, and many tropical trees and shrubs (among 55,000 that will eventually be transplanted from the Horticultural Center throughout Walt Disney World) are now in place.

In Frontierland, work continues on the setting for the “Country Bear Band,” a foot-stompin’, country and western hoedown featuring the zaniest group of bears ever assembled.

The male members of the cast include: the master of ceremonies, a seven-foot tall bear that wears a beaver hat and talks with a drawl; a five-bear string band; Comer and his rinky-tink piano; Big Al and his un-strung guitar; and the grizzly singing voices of Wendell, Ernest, Terrence, and old Liverlips McCraw.

And, for a change of pace, the program features a trio of horn-tooting fugitives from a taxidermist: an elk, a buck, and a moose. 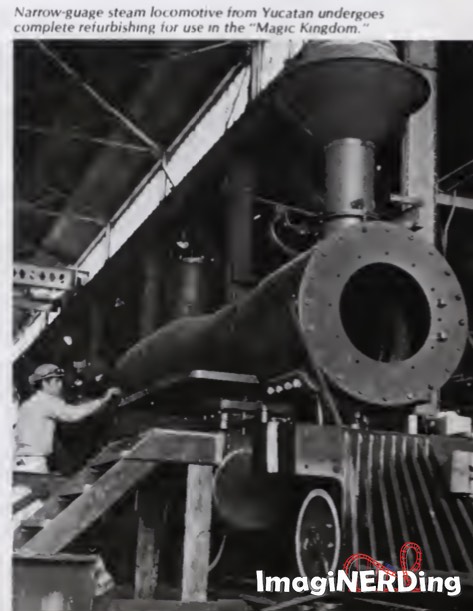 As far as the Walt Disney World Navy is concerned, more than 200 ships and other watercraft are beginning to move down the shipyard ways in Florida.

Ranging from paddlewheel steam-boats to replicas of Captain Nemo’s submarines, the vessels will play important roles, both in the theme park and in the transportation network linking Walt Disney World’s five major resort hotels with the Park.

Work continues on 12 adventure-seeking submarines patterned after assembled at the Martin Marietta Captain Nemo’s vessel in Walt plant in Orlando, are 171-feet long, Disney’s “20,000 Leagues Under The Sea.” Carrying 36 passengers each, they will tour a vast underwater world to view lost continents and ocean marvels. 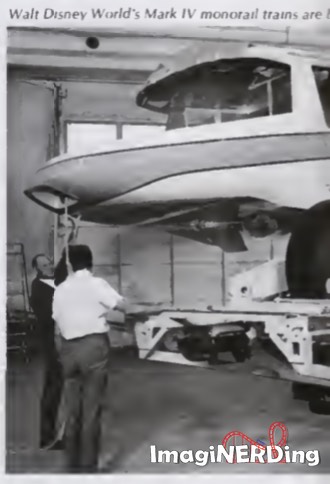 In addition to water craft, a new monorail system is being built for the Walt Disney World transportation network. Carrying up to 7,700 passengers an hour, the system enables guests to travel from the parking area and transportation center to the theme park or to the major theme resort hotels nearby. 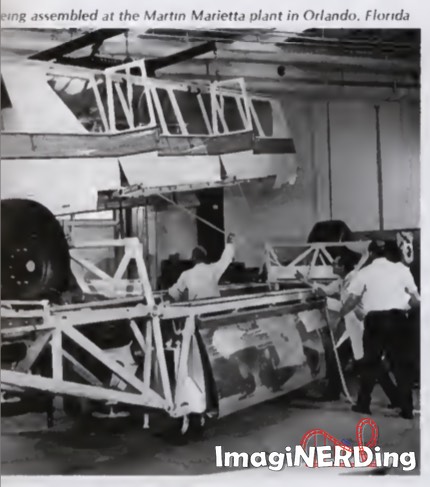 The new Walt Disney World Mark IV monorail trains, which are being assembled at the Martin Marietta plant in Orlando are 171-feet long, wider than their Disneyland counterparts, and incorporate a new air-suspension system for the smoothest ride possible. They are designed to attain speeds up to 45 miles an hour.

The silent, all-electric trains, which travel atop concrete beamways soaring up to 60 feet above ground level, are fully air-conditioned, operational in either direction, and boardable from either side.

In the area of food, a whole new world of dining experiences is being prepared for Walt Disney World guests.

Each of the six major lands in the theme park — Adventureland, Main Street, U.S.A., Frontierland, Fantasy- land, Liberty Square, and Tomorrowland — will have refreshment and themed eating facilities. At the resort hotels, foods from many lands and cultures around the world will be featured in dining rooms, nightclubs, and lounges. And, on romantic steamboats, in picnic areas, on golf courses, and at other recreation sites, unusual eating services will become part of the fun.

According to Food Service Division Director Jim Armstrong, Walt Disney World will be prepared to serve up to 175,000 meals a day. According to John Cardone, Manager of Food Production at the “Magic Kingdom” theme park, “Walt Disney World will serve the largest variety of foods anywhere in the world, everything from French pancakes to Polynesian ‘carry- away’ lunches.”

Variety is the key word in the entertainment area, too. By opening day, the “Vacation Kingdom” will need at least 350 entertainers, including singers, actors, pageant helpers, and production personnel. Bob Jani, Entertainment Director for both Disneyland and Walt Disney World, is already beginning to recruit production crews and initiate training programs.

In the “Magic Kingdom” theme park, both “atmospheric” entertainment and special shows will fill each of the six major lands. For example, on Main Street, U.S.A., a barber-shop quartet and the 20-piece “Magic Kingdom” Marching Band will be featured; in Fantasyland, a Black Forest Tuba Band, an English Pearly Band, court jesters, and the famous Disney characters; in Tomorrowland, rock music; in Liberty Square, fife and drum parades; in Frontierland, entertainment with a western flavor; and in Adventureland, steel drum bands. 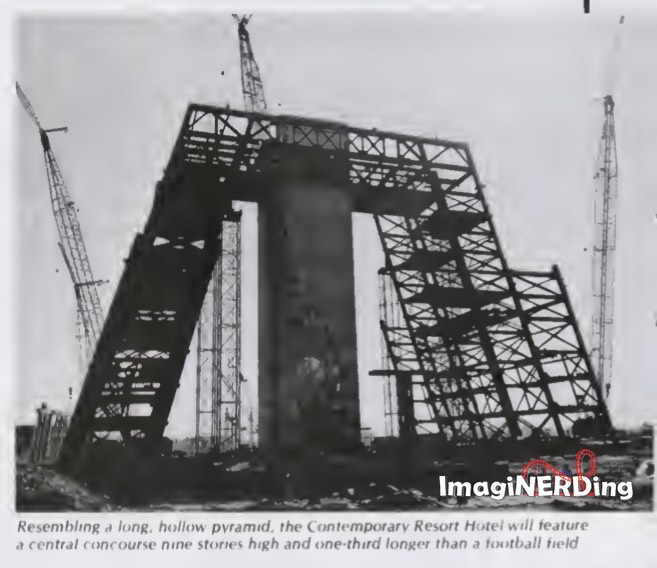 In addition, famous entertainers will appear regularly in such locations as the Celebrity Lounge atop the 14- story Contemporary Resort Hotel, and other entertainment locations in the hotels will feature top musical groups and personalities, as well as talent developed by the Disney organization.

Beyond the perimeter of the theme park, construction work is underway for the Contemporary Resort and Polynesian Village hotels, two of five major theme resort hotels to be located in Walt Disney World.

Located on the south shore of the “Vacation Kingdom’s” 200-acre lagoon, the Polynesian Village will offer an informal, leisure way of vacation living in keeping with the romantic South Seas mood it creates.

At night, it will take on a special magic with dining, dancing, and entertainment, all keyed to the South Pacific theme. Luaus under the stars or moonlight excursions on the lagoon will be a part of the total experience for each guest.

The main dining, shopping, and lobby areas will be in the Great House, resembling a royal Tahitian assembly lodge, with “open” peaked roof and brown-skinned rafters reaching through the swaying palms of a central atrium.

Glass walls will give an open feeling to the main dining room, as guests look out over cascading waterfalls and garden lagoons shaped like huge pearl shells.

The contemporary-styled hotel, unlike any building in the world, resembles a long, hollow pyramid. Its sloping walls rise like the lower half of a giant “A” toward a 1 4th floor penthouse restaurant and lounge.

Within its pyramidic hollow, the huge central concourse — nine stories high and one-third longer than a football field — will become a park-like landscape of the Grand Canyon and Monument Valley.

Colors will range from the cool blues and greens of the canyon floor, rising through sandy reds and oranges, to the heights in lighter yellows and golds.

Sunlight will stream through bronzed-glass end walls and skylights, pass by a magnificent tile mural 90 feet high, and reflect off the pools, fountains, sculptured shapes and walkways that wind past simulated open-air shops and restaurants.

Restaurants, shopping areas, and lounges within the concourse mall will be defined, not by walls and partitions, but by light, shadow, color, raised and lowered floor levels, and suspended space forms.

Sparkling white sand traps, jewel-like lakes, winding creek-like canals, and lush, wooded groves have been used in many different ways to challenge golfers.
According to Joseph L. Lee, one of the nation’s foremost golf course architects, “Each golfer will find varying degrees of skill required, de- pending on how he chooses to play.

Conservation is also playing a major role at the “Vacation Kingdom”. More than 7,000 acres of Walt Disney World have been set aside by the Disney organization for permanent protection as a Conservation Area.

One of the major objectives of the Disney organization in establishing the Area is to demonstrate that with imaginative planning and use of available technology, urbanized development can be achieved without causing deterioration of the environment or disturbing the ecological balance of adjacent areas.

To these ends, extensive water level control facilities have been constructed so that environmental factors can be maintained for optimum benefit to the flora and fauna of the area.

The most advanced methods of water and air pollution controls have been initiated, including the use of natural gas in virtually all vehicles and in the project’s central energy plant, automated trash disposal, and three-stage sewage treatment system to obtain a virtually pure effluent. This effluent, in turn, will be used for irrigation of the golf courses.

Hundreds of thousands of new plants, trees, and shrubs have been imported to help in beautifying the developed areas, while leaving untouched those natural primitive areas which will be protected from human encroachment. Truly, there is no destination-resort today quite like Walt Disney World will be tomorrow. And tomorrow is less than a year away.