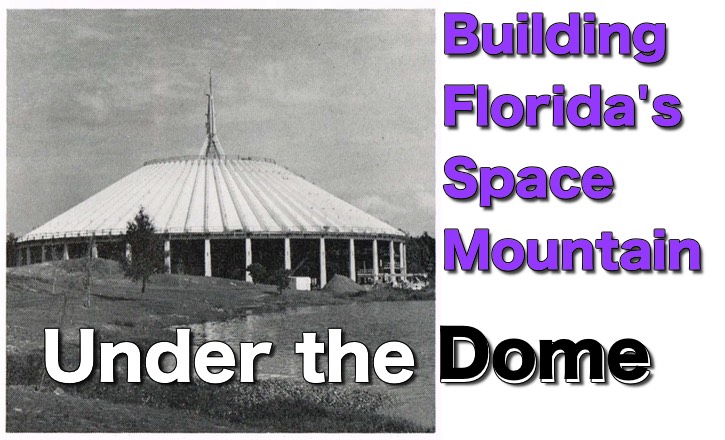 Under the Dome – Space Mountain Construction

No, we’re not talking about Stephen King’s classic novel about life under the dome, but the construction of Space Mountain at the Magic Kingdom!

Let’s check out the March 16, 1974, Eyes & Ears Newsletter for a construction update on Space Mountain.

The nose cone of the Interplanetary Explorer was installed this veek. No, this isn’t a news release from Kennedy Space Center, it’s part of a giant jigsaw puzzle coming together called Space Mountain.

EYES & EARS took a look at the project, to find out what’s inside our Mountain. It’s difficult to describe the apparent confusion of metal we saw, but our picture shows just part of the 3200 feet track that’s being assembled. Ed Campbell Project Superintendent, explained to us, “The whole track layout was designed by computer. Our MAPO Company in California built the sections in sequence and shipped them out here. This accounts for the fact that you can see only one side built up – the Omega side. The Alpha track sections arrive next.

If you drive by the Mountain now, you’ll be able to see the walls of the pre-show and post-show areas (entrance and exit to the ride itself) going up inside. That framework on the outside, opposite the road is the ‘chicken’ ramp…the exit for guests who change their minds at the last moment! However, all the interior work will soon be hidden from inquisitive cast members, when the outside walls go up in April.

Greg Bell, Show Coordinator for the Mountain, told us more about the Rocket Sled ride. “To call the ride a roller­ coaster is very misleading,” he explained, “It’s a lot more than that. All the bends and twists have been computer designed so you won’t be thrown against the sides on each curve…. rather you feel the thrill of the “ups and downs” at speeds up to 25 mph. You’ll appreciate this when you realize that you can’t see the track because it’s completely dark inside. .. except for the stars, comets and meteors flashing on the roof and walls, from sixty special effects projectors.”

Space Mountain is 43% complete. By September, the first sleds will be tested out on the track (already the construction crew is drawing straws to see who’s going to be the first ‘astronaut’). Show installation will be completed in November and in December, you’ll be able to take your own sled into the Space Port, where the Interplanetary Explorer is docked and blast off into space. It may seem like a long wait but Ed Campbell, Greg Bell and their 140 strong construction crew are building something worth waiting for.

The following image is from the Spring, 1974, Disney News and features a picture of Space Mountain under construction with the iconic roof in place. We still seem to be missing a wall or two… 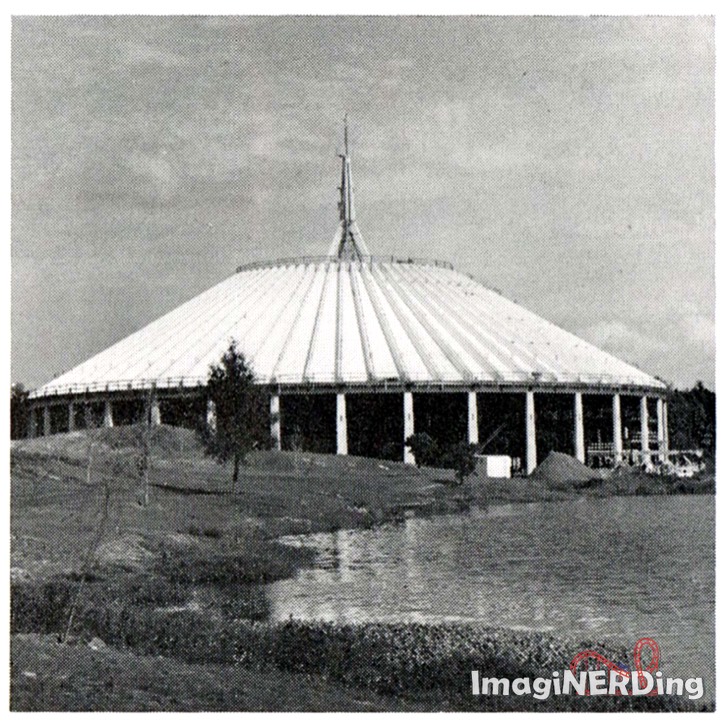 Do you remember seeing Space Mountain under construction?