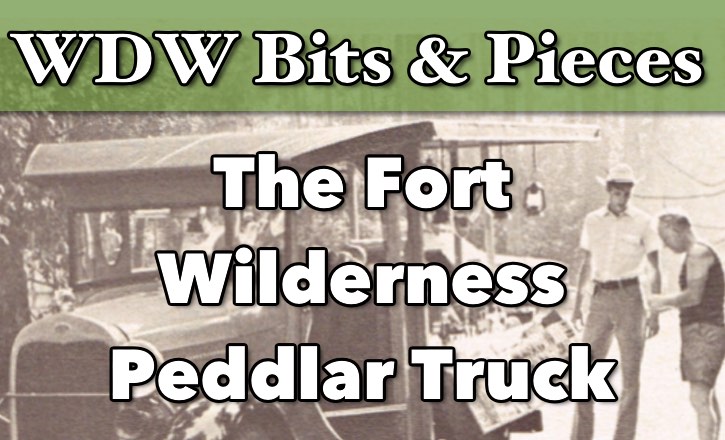 I ran across another WDW Bits & Pieces about the Fort Wilderness Peddlar Truck from the WDW News from September, 1975. I’ve only seen one other mention of the peddlar truck (spelled peddler’s) over at Ryan’s Main Street Gazette.

Every morning and evening, an antique peddlar truck, laden with fresh vegetables, fruits, foodstuffs, and camping supplies, rumbles down the roads of Fort Wilderness beckoning quests with a clanging cowbell.

Ryan at the Main Street Gazette offers this description:

…it wound its way through the campground selling foodstuffs and sundries to guests who were roughing it and needed provisions to survive the wilderness. Or marshmallows to roast at the campfire… The truck was modeled after the old-fashioned peddler trucks that serviced rural areas of the country. […]guests could find fresh fruit and vegetables, including corn, potatoes, and melons, chips, sodas, and even charcoal for cooking.

There is scant information available online about the truck that traversed the roads of Fort Wilderness Campground. Ryan’s site is the only mention that shows up in a search and he offers a fantastic press photo from the time.

Check out my Peddlar Truck video:

Bill Cotter of worldsfairphotos.com reached out to me and offered this photo of the Fort Wilderness amenity from the 1970s. This is an amazing color photograph of the truck. 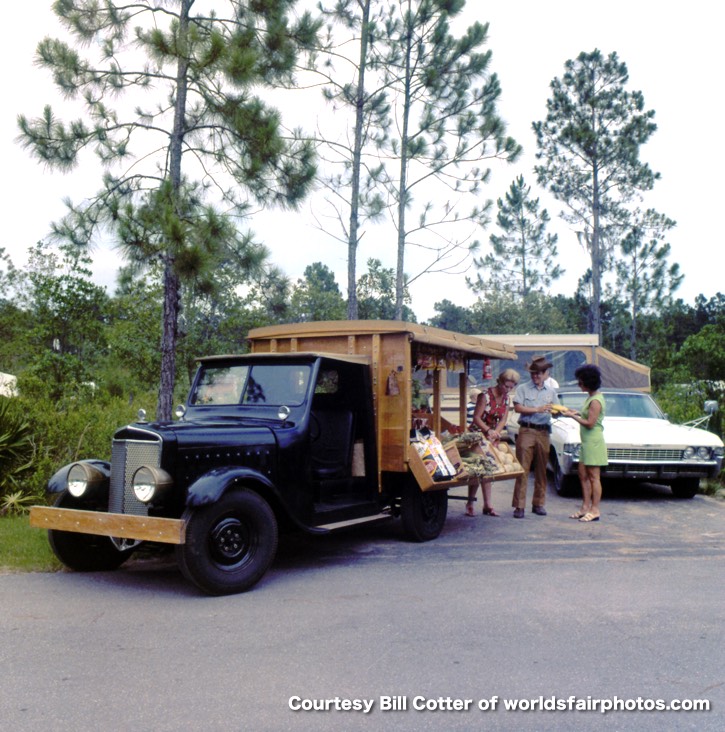 Let’s zoom in a little closer to see what was for sale on the truck.

It looks like the cast member is handing ears of corn to a guest. 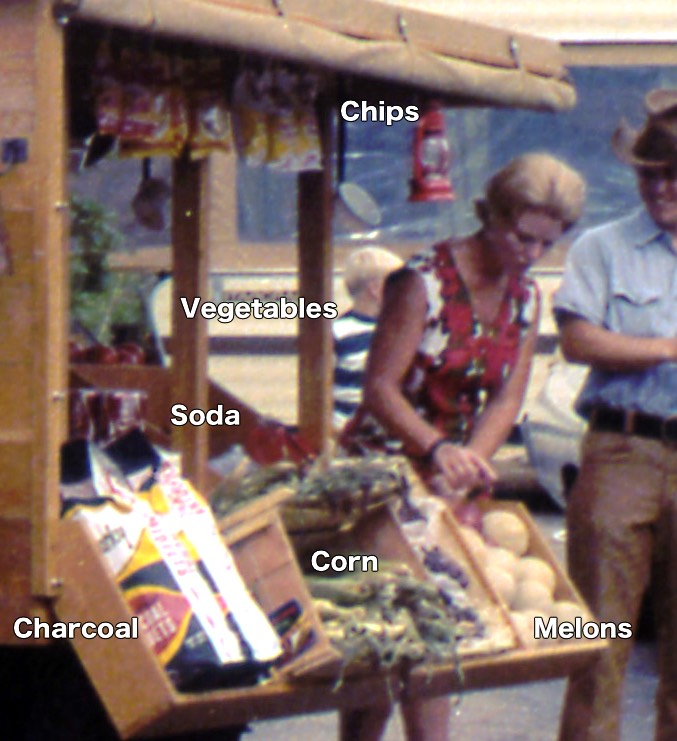 As far as I can tell from the image, the truck sold bags of potato chips, vegetables, cans of soda, bags of charcoal briquets, ears of corn and melons. Does anyone remember the truck and its wares? Thanks to Bill for sharing the photo! Make sure to check out his site.

The Fall 1980 Disney News has an update entitled Fort Wilderness: An Autumn Adventure. The short article outlines what a vacationer could expect if they spent a few days at Fort Wilderness in the fall of 1980.

Much to my surprise, there was mention of the funny old truck, also called the huckster truck. I was surprised to see more of a description of the truck and some of the wares. The article mentioned a second route in the afternoon with different goods. Also, the article confirms that the Peddlar Truck was in operation through the fall of 1980. 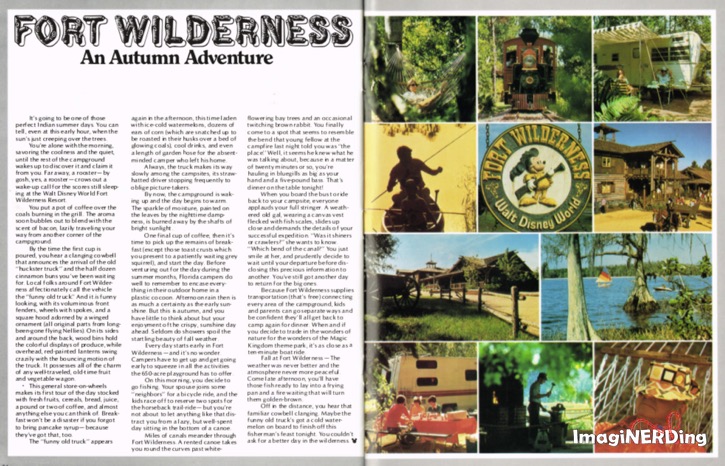 By the time the first cup is poured, you hear a clanging cowbell that announces the arrival of the old “huckster truck” and the half dozen cinnamon buns you’ve been waiting for. Local folks around Fort Wilderness affectionately call the vehicle the “funny old truck’.’  And it is funny looking, with its voluminous front fenders, wheels with spokes, and a square hood adorned by a winged ornament (all original parts from long­-been-gone flying Nellies). On its sides and around the back, wood bins hold the colorful displays of produce, while overhead, red-painted lanterns swing crazily with the bouncing motion of the truck. It possesses all of the charm of any well-traveled, old-time fruit and vegetable wagon.

This general store-on-wheels makes its first tour of the day stocked with fresh fruits, cereals, bread, juice, a pound or two of coffee, and almost anything else you can think of. Break­fast won’t be a disaster if you forgot to bring pancake syrup—because they’ve got that, too.

The “funny old truck” appears again in the afternoon, this time laden with ice-cold watermelons, dozens of ears of corn (which are snatched up to be roasted in their husks over a bed of glowing coals), cool drinks, and even a length of garden hose for the absent­ minded camper who left his home.

Always, the truck makes its way slowly among the campsites, its straw­-hatted driver stopping frequently to oblige picture-takers.

Did you ever get to experience the Peddlar Truck (also known as the Funny Old Truck)?

Don’t forget to subscribe to my YouTube Channel for more videos on Disney parks, Universal, theme park books and more!