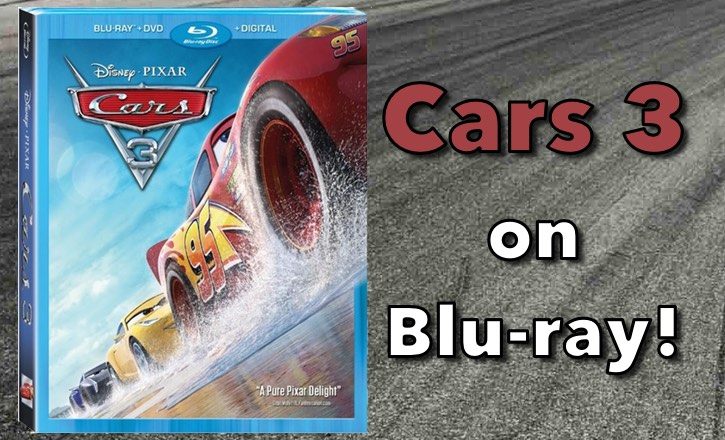 Cars 3 on blu-ray has just been released. Are you going to add it to your collection?

The original Cars was released in 2006 and became the most lucrative franchise that Disney owned. After a billion-dollar expansion of Disney California Adventure to create Cars Land, we’ve seen two sequels and a number of shorts. Honestly, I never thought that Pixar would make sequels, but it seems as if Lasseter is doing his best to beef up the Disney coffers.

Cars 3 is the third part of Lightning McQueen’s journey. At first I wasn’t really interested in seeing the film, simply because I couldn’t imagine where they could take it. Would it be like the Rocky films? You know, where he was on top and then got beat down? Then he had to find his way back up.

I have to admit that I was pleasantly surprised by the turns that the film took. There were some surprises with the plot and characters, as well as some very charming moments. An eye-opening moment after watching the film concerned the lack of a perceived villain. Except for McQueen feeling out of place, it was refreshing to see a family film with no clear-cut villain.

The film is absolutely gorgeous and showcases how far technology and artistry have come. The part of the film that takes in Thomasville, North Carolina, really had the flavor of the rural area. On a different note, all of the main characters from Cars were played as ancillary to the story. They were all there, but they were mostly ties to Radiator Springs and McQueen’s older life.

Cars 3 on Blu-ray: The Bonus Features!

The bonus features added a lot to the film, especially thinking about how they had to make a sequel in the series. How would you characterize changing a character as well as how to create a story that wasn’t formulaic.

Are you going to check out Cars 3 on Blu-ray?