You’ve seen Guardians of the Galaxy Vol. 2, right? And you don’t need me to tell you how fantastic the film is. But, should you buy a copy of the blu-ray release of the second installment of the Guardians franchise? 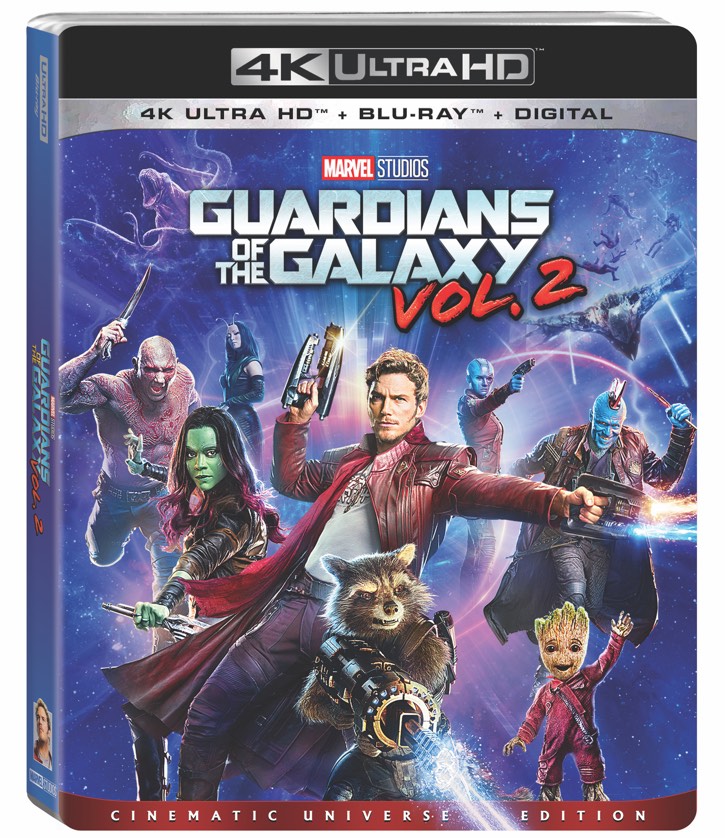 Of course, if you’ve seen the movie and you’re a fan of the Marvel Cinematic Universe, then you need to buy it. The film is gorgeous and sounds amazing, especially with the music.

But what about the bonus features?

The blu-ray release has more than 80 minutes of bonus features and I watched them all with my thirteen year-old son. I was surprised, because he rarely wants to watch the extra features, but, he loved them! He thought they were funny and added a lot to the overall viewing experience.

The Making of “Guardians of the Galaxy Vol. 2” – A four-part, behind-the-scenes look at the making of the film, done in the style of classic-rock album liner notes.
Visionary Intro – Director James Gunn provides context on how he continues and expands the storylines of these beloved characters in “Guardians of the Galaxy Vol. 2.”
Guardians Inferno Music Video – Join David Hasselhoff and special guests for a galactic retro dance party.
Gag Reel – Laugh out loud at all the hilarious off-script shenanigans and bloopers that took place on the set of “Guardians of the Galaxy Vol. 2,” featuring all your favorite Guardians.
Four Deleted Scenes – Check out four specific scenes that had to be cut from the film, including two extended scenes and two deleted scenes.
Audio Commentary – Check out a special narration of the film by director James Gunn, who guides fans through an inside look at the making of the movie.

I enjoyed the behind-the-scenes features, especially the ones that showed the actors outisde of their costumes. Sometimes the differences were stunning.

Three Scene Breakdowns (Digital Exclusives) – We’ll reveal the anatomy of a few key scenes from the film. Discover the process in bringing these scenes to life. It starts with a doodle and the rest is film history. Audiences will be given the option to view 5-6 layers of specific scenes in the film. Scenes include “Eclector Escape,” “Gamora and Nebula,” and “Rocket and Ravagers.”
Guardians of the Galaxy – Mission: Breakout! (Digital Exclusive) – Get an exclusive sneak peek inside the most anticipated ride at Disneyland, Guardians of the Galaxy – Mission: Breakout!. We’ll dig into the concepts and inspiration, and talk about what it took to bring the most epic ride at Disneyland to life.

I haven’t watched the digital extra features, but I will Sometimes, I run out of time to watch everything before the review is due.

Guardians of the Galaxy Vol. 2 may not have resonated as well as the first film, but it’s every bit as funny and charming; mores since we’re very familiar with the characters at this point.

I can’t wait to see how the Guardians are pulled into the Civil War films.

Are you going to pick up Guardians of the Galaxy Vol. 2 on blu-ray or digital download?

FTC Disclosure: A copy was provided for the purpose of this review. This post contains affiliate links, which means that ImagiNERDing receives a percentage of sales purchased through links on this site. Thank you for your support!