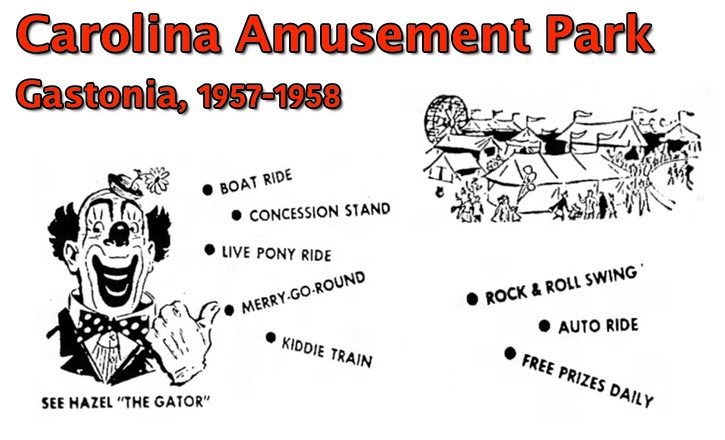 The Carolina Amusement Park was located in Gastonia, NC (east of Charlotte). As you can imagine, researching for the terms Carolina mixed with amusement park will bring lots of interesting results.

This advertisement appeared in the classified section of the Gastonia Gazette for the grand opening of the park on Saturday, April 20, 1957. Surprisingly, there were no interviews or articles in the local paper or any other news items about the opening.

Charlie takes on three junior contestants at one time. Throw Charlie and win a valuable prize! Charlie is the world’s only wrestling’ baboon! Two days only, Saturday and Sunday. Five performances each day.

It’s noted that the park is open at 1 P.M. daily and Sunday. This advertisement was taken from the middle of the comic pages of the newspaper. A fairly generic line drawing of a fair is presented.

The advertisement focusing on the July 4 celebration at Carolina Amusement Park offers more information about the park. It lists the following features: boat ride; concession stand; live pony ride; merry-go-round; kiddie train; rock & roll swing; auto ride; free prizes daily; and Hazel “The Gator”. You can also clip the coupon for a free ride on the merry-go-round at any time. The park is listed as being open from 1:00 P.M. until midnight (seven days a week). There are also special rates for birthday parties, church or civic groups.

The next advertisement appeared in the Gastonia Gazette on Friday, May 30, 1958, page 9. It was another ad in the classified section. This time, the ad listed: rides for kiddies and teenagers; concessions and games; plenty of shade with free picnic tables and grill. Again, the park was open at 1 P.M. daily.

This rather sedate but large ad featured in June of 1958 mentions the open-air dance pavilion and the fact that you could buy 10 hot dogs for one dollar! I’m not sure if those were cooked hot dogs or  that you could grill them yourself. I’m assuming it was a last-ditch effort to get people to come to the park.

Ned Alexander McGill was born September 9, 1921 and died November 2, 1984. Based on digital city directories, during that time period, he listed his occupation as a salesman. Was he a salesman for the Carolina Amusement Park or the owner?

In the November 17, 1958 Billboard classifieds (page 74), Ned McGill lists the merry-go-round for sale:

With the lack of articles for the park after 1958, I assume that it folded in the fall of 1958. Potentially, it could have held on for another season, but there is no mention of it. With the attempt to sell the merry-go-round and the fact that it needed 12 horses leads me to assume that Carolina Amusement Park probably did close in 1958. Did Ned sell off some of the horses? Were they damaged?

As I mentioned earlier, doing a search for “Carolina Amusement Park” in most online databases yields varied results, mostly articles on Carowinds or my NC Amusement Parks page on this site.

Do you have any information or photos about the Carolina Amusement Park located in Gastonia?

Most of the articles used in this post came from the Gastonia Gazette newspaper (as of 08/15/2017).

This article is part of an ongoing series detailing the history of amusement parks in North Carolina. Dates and information on the page may change due to new information being discovered. At its most basic level, I’m considering an amusement park to have at least one motorized ride (electrical, steam, gas-powered, etc.).