Thanks to a great friend, Todd at Disney Parks Earchives, I was able to pull some images from a 1986 Town Square Cafe Barbecue menu. It was called the Town Square Times and was sponsored by Hormel. In addition to being the lunch menu, the Town Square Times offered a brief history of Hormel and some fantastic advertisements for the shops of Main Street, USA at the Magic Kingdom at Walt Disney World.

The restaurant that’s now known as Tony’s Town Square Restaurant was originally slated to be sponsored by a coffee company. Original plans named it the “Coffee Mill Restaurant”. By opening day, it was simply “Town Square Cafe” and was sponsored by Oscar Mayer. One of the dishes served was a Monte Cristo ($1.75), which belies that it was more upscale than just hot dogs. In fact, Wieners A La Oscar ( two wieners with baked beans and cole slaw) was on the menu which is more plebeian than the name suggests. By 1981, Oscar Mayer dropped sponsorship and Hormel stepped in.

Hormel sponsored the restaurant until 1989. I can’t find a reference to the Town Square Cafe Barbecue name outside of this menu.

Does anyone know if Town Square Cafe Barbecue was just an appellation for the lunch menu as part of the theming?

Any way, the menu offers some amazing advertisements for the other businesses and shops of Main Street, USA. Let’s take a look at them!

The first set of ads refers to the Emporium, the Markethouse, the Tobacconist, the Clock Shop and the Greenhouse. The tag for the Greenhouse says, “Flowers for Cosey Bowers.” A bower is a shady place for trees and flowers where you would relax.

The second ad shows the Daily Line of Coaches from the Main Street Transportation Co.

The Chapeau offers the “GRANNY” COLLARETTE, just from Paris as well as Gentlemens’ Head-Pieces. The Camera Center and Portrait Studio sells stereoscopes.

The finest safety bicycle ever invented by man, the “EMPIRICAL” provides speedy transportation and beneficial exercise for all. A person of any height may now ride an “EMPIRICAL” with complete peace of mind, since the feet are close to the ground. Yet, reasonable speed may be easily obtained since this marvelous Machine can travel twice as fast as a man runs. Original steel from Birmingham, Alabama, ensures the finest precision assembly and many have said that the “EMPIRICAL” is truly a marvel of modern manufacturing. Physicians with World-Wide reputation have testified to the particulars of exercise derived from bicycling This exercise enhances muscletone. invigorates the system and prevents stagnation of the liver. Bicycling isn also useful in promoting the physical development of young people and children. The “EMPIRICAL” provides an agreeable exercise without fatigue for those leading a sedentary life, and is enthusiastically recommended by Mr. John L. Sullivan. Intending Purchasers and others are invited to call and inspect the Machine at Kent & Tripodi, Ltd. Whenever practicable, opportunities for Free Trial will be gladly afforded to those who are riders. A Descriptive Circular with Testimonials (post free) my be obtained.

I’m assuming the Mr. John L. Sullivan (1858-1918) is a boxer known as being the world’s first gloved heavyweight champion. After his boxing career, he was a stage actor and a spokesperson. Kent & Tripoldi eluded me. Any thoughts?

Could Tripoldi be a play on Tripodi? As in Tom Tripodi? According to the Cartoon Cave blog, Tom Tripodi managed the art department at Walt Disney World in 1989 (not sure if this is right based on the wording from the blog post). Tom also designed the LiMOUSEine that was part of the Disney-MGM Hollywood Studios publicity. 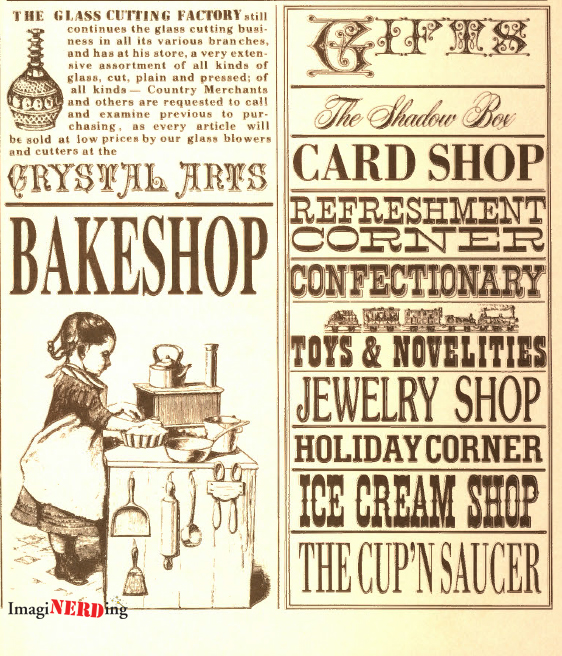 Crystal Arts: The Glass cutting factory still continues the glass cutting business in all its various branches, and has at his store, a very extensive assortment of all kinds of glass, cut, plain and pressed; of all kinds – Country Merchants and others are requested to call and examine previous to purchasing, as every article will be sold at low prices by our glass blowers and cutters at the Crystal Arts. 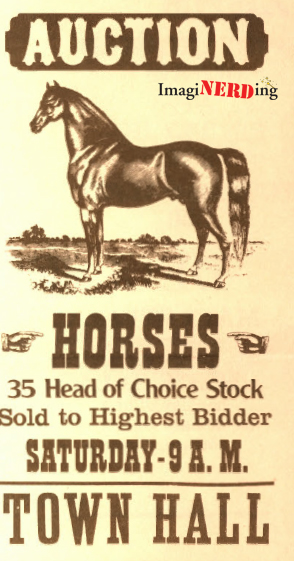 Apparently, they auctioned horses at Town Hall on Saturdays. I wonder if we need to make a FastPass+ reservation?

The Harmony House Barber Shop, House of Magic and the Cinema are all represented.

I love the last ad on the page!

The Walt Disney Story
Follow Walt Disney from his midwestern boyhood to the creation of dreams for Disneyland and Walt Disney World…
LISTEN as the “Showman of the World” recalls many of the milestones in Disney entertinment
SEE rare film footage and photographs from family archives
EXAMINE many of the awards and Oscars garnered over the past 50 years…many presented by kings, presidents and nations
PREVIEW Walt Disney’s dreams for the future
Admission Free

And not just MagicBands. 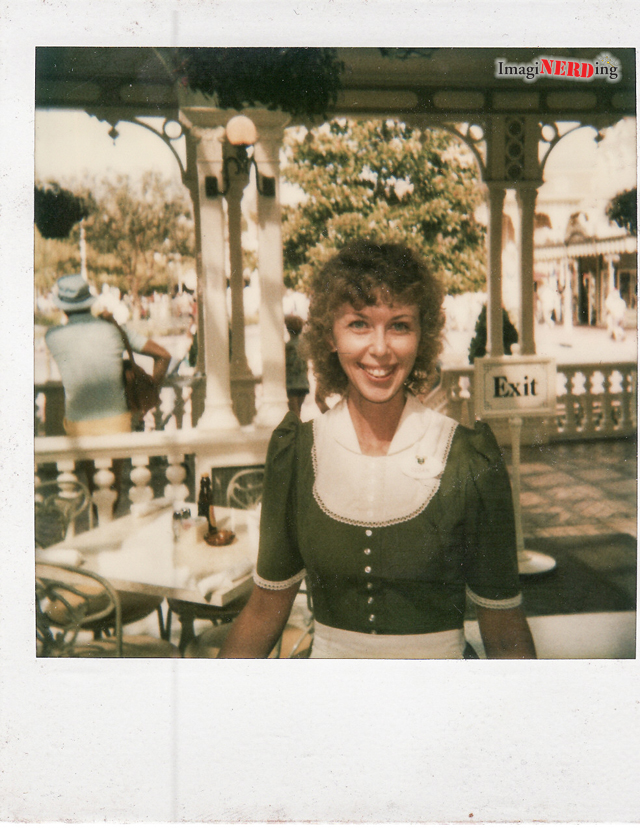 A reader sent me a photo of herself working at Town Square Cafe during the 1970s and 1980s. She offered the following about working at the Cafe:

The costume was full skirted and floor length. The gentlemen wore black slacks, white shirts, a matching green vest and a short green jacket. They looked good too. I remember some things about the menu. We served breakfast and there was a to-die-for Monte Cristo sandwich that was very popular. Also, we served large salads and steaks.

Finding gems like the Town Square Times is pretty spectacular. As we work on documenting the history of Walt Disney World, things as ephemeral as menus become priceless. Not just for the food served and prices, but also because of the glimpse into how Walt Disney World presented it self across all media. Remember the days when napkins were branded and changed every so often? I’d love to see Disney return to this in so many forms and fashions.

Special thanks to Disney Park Earchives and Widen Your World for assistance with this article.

Did you ever get to experience the Town Square Cafe before 1989? Any special memories or stories to share?