Star Wars: The Clone Wars: The Lost Missions gets reviewed by Jeff and George. Is this blu-ray worth adding to your collection?

Jeff: The fantastic Star Wars: The Clone Wars: The Lost Missions blu-ray was released November, 2014. After five amazing seasons, the show ended on Cartoon Network. But a few months later, 13 additional episodes appeared on Netflix. This set collects those 13 episodes, never before seen on TV. 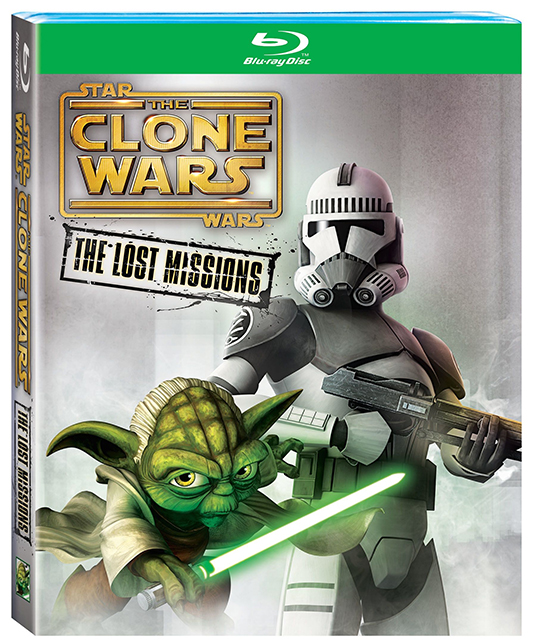 George: We’ve been fans of the Clone Wars cartoon series since it’s inception and I was sad to see it end. When the blu-ray showed up, I was glad to see how the Clone Wars: the Lost Missions sort of tied up the series and led us into Episode III and the new Star Wars Rebels series. The Clone Wars cartoons have always done a great job of keeping Star Wars fresh and relevant, if not more interesting than the prequels.

Jeff: It’s WAY better than the prequels. The prequels don’t exist to me because of this show…this show far exceeds it. But yes, it’s great to see these characters again, and to have a few odds and ends tied up. On top of that, it really shines on blu-ray, and looks fantastic. The animation quality of this show is above and beyond most shows, and it’s super impressive.

George: The 13 episodes really showed how good the entire series was, from a creative and technical standpoint. There were a handful of bonus features that took us behind-the-scenes. The one with show runner Dave Filoni was particularly enlightening because of how inclusive George Lucas was. You got a real sense that he still loved the Star Wars universe and wanted to help tell some really great stories.

Jeff: There was also a short documentary that covered the making of the ENTIRE series, which was interesting to see. Also, a handful of unproduced story reels. Sure, not a whole heck of a lot, but there was enough to keep me satisfied, and let’s face it, the real reason you’re watching is to find out how Clone Wars ends and how Rebels begins!

George: overall, I’m really glad to have two amazing releases from Disney featuring Star Wars (Clone Wars: the Lost Missions and Phineas and Ferb Star Wars). I hope it bodes well for Rebels and the forthcoming feature film. These discs would also be great for viewing over the upcoming Thanksgiving weekend for our readers in the States.

Jeff: Or, as our international readers call it, “Saturday and Sunday.”

What did you think about Star Wars: the Clone Wars: the Lost Missions?