George: This really is a great time to be a Star Wars fan! We just received review copies of Lego Star Wars: The New Yoda Chronicles on DVD. I’ve never watched any of the episodes before, but my youngest son has been a gig fan of the Legoseries. The whole family has been fans of the Lego video games from Travelers Tales, especially the Star Wars and Marvel games, so I had high hopes for this series. I just hoped that the sense of humor would translate from the video games to the show.

Jeff: I was a liiiiittle concerned, because there was a game a few years ago with a very similar name, released on various app stores, and it wasn’t the best. That said, this DVD definitely held up the standard of Lego games, to me. The disc includes four episodes from the show: Escape from the Jedi Temple, Race for the Holocrons, Raid on Coruscant, and Clash of the Skywalkers.

George: Most of the story centers on the ghost of Obi-Wan (g-g-g-g-host whistle?) and Yoda talking about adventures that took place between A New Hope and The Empire Strikes Back. They know that Luke needs to be trained as a Jedi and the the Jedi Holocrons are the best way. But all of the holocrons are being held by the Emperor. Well, the usual gang of Lego rebels (Luke, Leia, Han, Chewbacca, and the droids) attempt to steal the holocrons and hilarity ensues. I really was surprised by the humor in the series.

Jeff: It really does take the humor that we are used to from the video game series and perfectly sets it into a TV show. I found myself laughing out loud more times than I expected while watching the episodes. In some ways, it was like watching the cut scenes from the games, but expanded, and much, much funnier.

George: It’s obviously not really canon, per se, but it does delve into some interesting points of the Star Wars story. There are a lot of locations from the prequel that are visited and it’s always fun to see Lego versions of the characters and the ships. And it was really good to see Darth Vader step up and show off his comedic chops!

Jeff: There are no bonus features to speak of, though, aside from an alternate ending to Clash of the Skywalkers. I would have really liked to have seen how the episodes were made, and the process behind bringing Lego to life for the screen. That said, even without them, it’s still a solid offering. 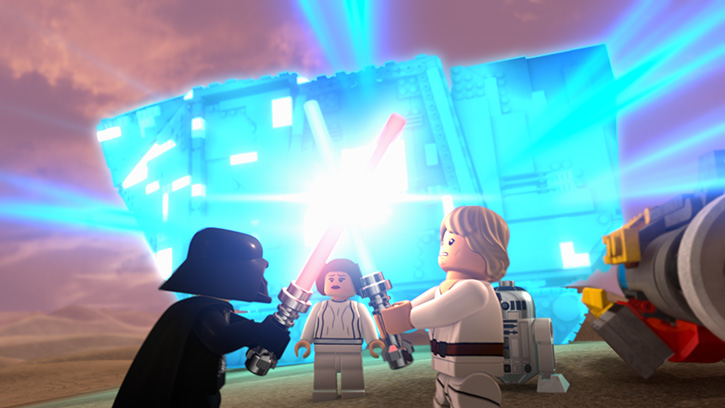 George: New Yoda Chronicles is for Star Wars fans, especially the ones that enjoyed the Lego games or previous Lego shows are really going to enjoy this one. For fans, it’s a definite purchase.

Jeff: But again, make sure you get the DVD and not the game. That is terrible!

Did you check out Lego Star Wars: The New Yoda Chronicles? What do you think about the Lego films and video games?