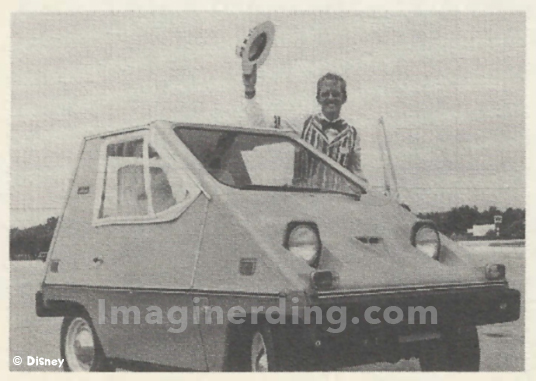 An electric car at Walt Disney World outside of EPCOT Center?

The Dapper Dans have always been known as the Ambassadors of Main Street, since their inception at Walt Disney World on September 23, 1971. In the following image from a 1976 Eyes and Ears. we meet Neel Tyree, who started as a Dan in 1973. In addition to being an Ambassador of Main Street, with his CitiCar, he’s ready to be an ambassador for the future!

“What in the heck is that?” is a question Neel Tyree gets asked almost daily everywhere he goes. And like everyone else, EYES & EARS couldn’t resist either. Neel, a member of the Dapper Dans, explained that it’s a CitiCar . . . completely electrical . . . built here in Central Florida. “I guess it’s the biggest toy I ever had, ” he related, “but soon I discovered how very practical it is.” Neel has been driving the little wedge shaped two-seater for eight months now, and has found it a real money saver. “It operates for about $6.50 a month, total. And I use it everywhere. ” Neel lives in Winter Garden and has found no problem in driving the 28 miles round-trip in the little car which moves along at 38 mph. And when he gets home at night? “Just plug her into any old wall socket, that’s it. “

Sebring-Vanguard, located in Sebring, FL., manufactured the CitiCar, a battery-electric vehicle, from 1974-1979. The company only made 4,444 units and included several variations and models. The range was about 40 miles and depended on tire pressure, vehicle weight and whether the windows were rolled up or rolled down.

So, no air conditioning? In the Central Florida heat and humidity? Do you really want an electric car at Walt Disney World?