On a few recent trips to Walt Disney World, I ran into some remnants of Pleasure Island. 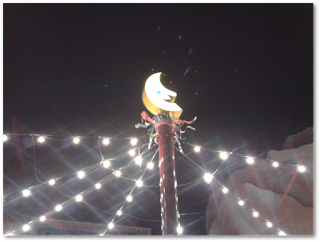 This was that last Mr. Funnmeister at Pleasure island. This photograph was taken in August 2010 and it was not in a very accessible area.

The remaining photos were taken around the Rivefront District of Pleasure island. By the former 8-Trax and the Lombard Promenade. It is where the 14 is designated on the map. 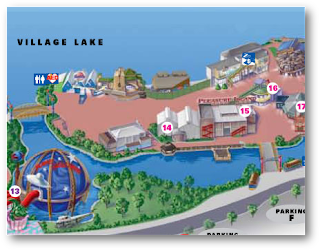 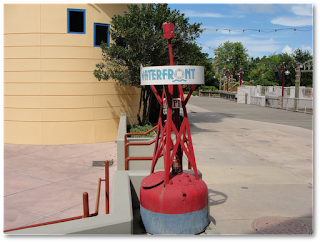 Leftover theming for the Riverfront. The buoy has the logo and PI initials. 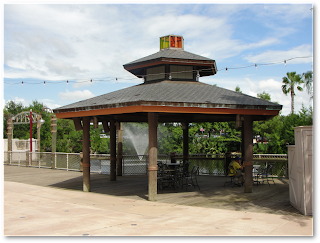 A lone person using his cell phone under the pavilion. Being the serious Disney enthusiast, I couldn’t resist getting an upshot! 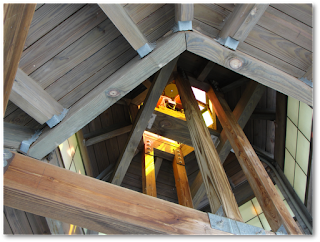 You can see the lighting equipment that is still there.

One of those great details that most people will stroll right by is a reference to Lombard Street in San Francisco. This could have been a regular set of stairs, but the Imagineers chose to pay tribute to the famous road in San Francisco. I imagine that someone was thinking of semi-intoxicated revelers making their way to the bottom. 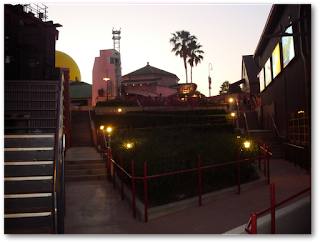 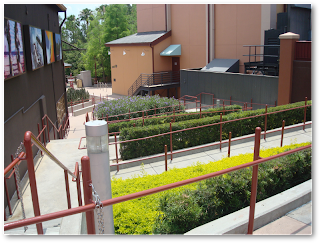 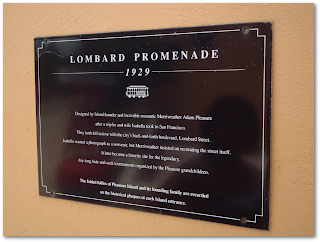 Designed by Island founder and incurable romantic Merriweather Adam Pleasure after a trip he and wife Isabella took to San Francisco. They both fell in love with the city’s back-and-forth boulevard, Lombard Street. Isabella wanted a photograph as a souvenir, but Merriweather insisted on recreating the street itself.

It later became a favorite site for the legendary, day-long hide-and-seek tournaments organized by the Pleasure grandchildren.

The fabled follies of Pleasure Island and its founding family are recorded on the histerical plaques at each island entrance.

8-Trax is a very interesting club because of its location and the sign hanging above the door. It took me a minute to explain to my (then) 11 year-old son what an 8-track tape was. The club started off as Videopolis East and was considered the sister club to Videopolis at Disneyland. It also catered to the under 21 crowd, which could explain its rather out-of-the-way location. By 1990 it was known as Cage and had been turned into 8-Trax by 1993. 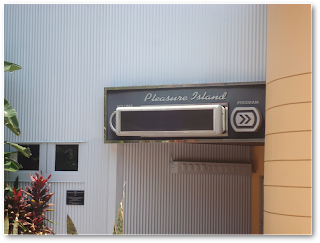 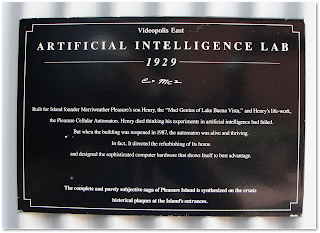 VIDEOPOLIS EAST
Artificial Intelligence Lab
1929
Built for Island founder Merriweather Pleasure’s son Henry, the “mad genius of Lake Buena Vista” and Henry’s life work, the Pleasure Cellular Automaton. Henry died thinking his experiments in artificial intelligence had failed. But when the building was reopened in 1987, the automaton was alive and thriving.

In fact, it directed the refurbishing of its home and designed the sophisticated computer hardware that shows itself to best advantage.

The complete and purely subjective saga of Pleasure Island is synthesized on the ersatz histerical plaques at the Island’s entrance. 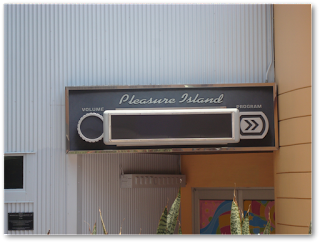 I included this photo so you could see the coloring on the door. Obviously, 8-Trax catered to the 1970s crowd.

Don’t forget to keep an eye out for other pieces of Pleasure Island history. To keep up with the changes, you can always visit Save Pleasure Island blog. In addition to photo updates, the author keeps everyone up-to-date on the latest Pleasure island news.