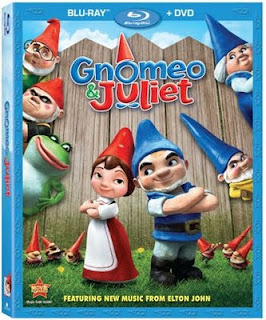 Our review copy of this film showed up while I was at the Destination D event at Walt Disney World in May. Apparently, my wife and youngest son watched the film four times that weekend. I finally got the chance to watch it and I have to admit that it was very enjoyable. And the songs will stick in your head forever!

I asked my wife to review this title since she is obviously more familiar with it!

I have to say that I started watching this with the assumption I was going to think it was ridiculous. I was pleasantly surprised when I found it creative and charming.
Being an Elton John fan would enhance your experience as well. The Gnome-specific lyric modifications to his songs are perfect and I can’t even imagine how they came up with the word pesticide in one of the lyrics. This is a very family-friendly and unique take on the Shakespeare Original. My 7-year old danced all over when he saw it the first time, second time, third time…100th time. I have to admit that I have even watched it 4 times and enjoyed it each and every time.
Be on the lookout for a “cheeky” gnome and listen carefully for a famous wrestler on the “Terraferminator” segment.  Juliet’s Best Friend, a frog named Nanette, and the Flamingo could easily be the most memorable characters. Blatant homage to The Tiki Room music is well placed and unexpected. Just be on the lookout for all the tiny nuances and references, watch it several times and catch them all.
One additional note, I normally find the special features on movies irritating but the special features for Gnomeo and Juliet are really interesting as they dissect the involvement of Elton John during production and the original songs that he and Bernie developed for the film.