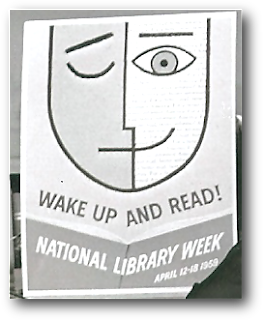 In the 1950s, book publishers and librarians all over the country discovered an alarming trend–people were spending more money on televisions and radios, while spending less money on books! And less time reading said books.

The American Book Publishers Council and the American Library Association convened to form the National Book Committee in 1954. One of the charges of the National Book Committee was to create a way to showcase and focus on the nation’s public libraries. The very first National Library Week (NLW) was held in April 1958 with the theme Wake Up and Read!  President Eisnhower drafted a public proclamation stating that all people of the US should participate to the fullest in the National Library Week. In addition, the Advertising Council approved NLW as a public service campaign; 5,000 cities and towns celebrated the week showing marked increases in book checkouts and library card registrations.

The second year of NLW used the same theme of Wake Up and Read! Many celebrities endorsed the program and signed up for promotional ads.

I found this great photo of Walt Disney in Walt Disney World Then, Now, and Forever by Bruce Gordon and Jeff Kurtti. 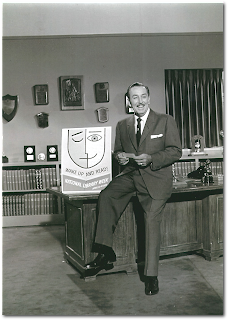 Walt is perched on the edge of his studio office (not his real office, but the one used in the television shows) with the 1959 promotional poster. I assume that Walt is holding a library card, but it is difficult to tell.

I found a color copy of the poster at http://jonwilliamson.com/template_permalink.asp?id=3997 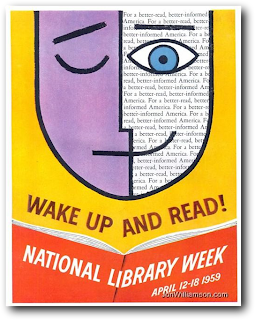 I could tell there was writing on the poster, but I couldn’t make it out until I saw the larger, color version. It states: For a better-read, better-informed America.