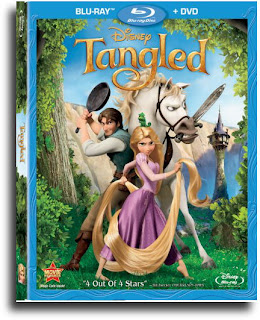 Did you see this film in the theaters?

I really hope so. If not, then the Blu-ray release of Disney’s fiftieth animated film is a definite add to your personal library.

After the disappointing response to The Princess and the Frog, Disney hops back into the territory that they know best with a film about a lost princess, a bad boy, a horse, a chameleon and villains that you love to hate. Alan Mencken returns with a superb soundtrack and the digital artists have produced one of the most gorgeous Disney films ever. And if you need another reason, both of my boys saw the film in the theater and have watched it multiple times on blu-ray. This is a great family film.

After watching my first blu-ray film, I was hooked on the format, especially for animation. The digital, high-definition reproduction is one of the best I have seen. Whereas Bambi was spectacular in its blu-ray release, Tangled shows off the medium perfectly.

Tangled is a perfect example of how Disney can make a film with broad appeal without resorting to pop culture references that will be dated (uh, yeah, I’m talking to you Shrek). Disney’s artists have found the happy balance of presenting their characters realistically and as human caricatures. With animating people, we (as people) are the harshest critics. Innately, we know how a human is supposed to move. Unlike the debacle of Mars Needs Moms, where the realism was creepy (a la Disney’s A Christmas Carol), Tangled presents a classically animated form that is able to show profound emotions and action.

With the amazing extras that Disney has included on their recent release, I was really surprised at the lack of bonus features included with this disc: a few extended songs, deleted scenes, a behind-the-scenes featurette and the two alternate beginnings. Really? That’s all? Maybe they are waiting for the HD Holographic Smellovision release for some of the extras. Seriously, imagine how good Rapunzel hair smells after being wet and dragged through the forest! I will have to admit that this is one blu-ray that does merit purchase simply for the film.

So, ultimately, Disney has crafted a wonderful film that does its best to stand alongside the greatest company classics. Truly, a modern-day, fairy-tale classic that you will enjoy for years to come.

This blu-ray was provided as a review copy by Walt Disney Studios Home Entertainment.