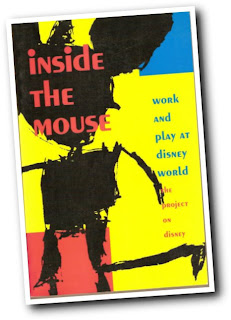 Did you ever have a book that you were loathe to finish? One that you didn’t want to spend time with?

Let me tell you about one. I was excited when I got my copy of this book. It has been around for a number of years, but not many people have talked about it. Now I know why.

The authors (all academics) take on Walt Disney World, but they never look beyond the ends of their noses. They land smack dab in the middle of the Disney Decade and all they see is mass consumerism and an idle shift in corporate values. They also see us, the visitors to Walt Disney Word as a heard of brand-induced and crowd-mentality fodder for the turnstyles, gift shops, restaurants and hotels. In all of their interviews and anecdotes, it is apparent that they never talked to anyone that had a inkling of what a Disney vacation is supposed to be.

The book did have three redeeming chapters: Working at the Rat, Public Use / Private State and Monuments to Walt. Working at the Rat consists of interviews with castmembers that connote that working for Disney is tantamount to forced, temporary labor. No chance for advancement and every chance of being let go before you get permanent status. Granted, the tone is pretty negative and it is obvious that only the “lower echelons” of Disney castmembers were interviewed. Looking at this chapter, one would surmise that working for the Mouse is extremely cut-throat. Public Use / Private State made me step outside of my normal tourist pursuits and see how we interact with the private (re:corporate-owned) areas like the theme parks. Even though they are private, we are expected to use them as public spaces, i.e. a park, mall area or town square. Disney champions what most other businesses can’t: use us like you were at home, albeit a care-free and safe home. The chapter I enjoyed the most was Monuments to Walt. The author looked at current architectural motifs and themes and discussed how Disney was using them to gain a means. A means of continuing the storytelling to the resorts and eateries. There is still some lambasting, but mostly to the end that the author believes that what exists today is because the leadership of the company, until Eisner, constantly prayed at the altar of “What Would Walt Do.” The author proclaims that Epcot is merely a necropolis dedicated to Walt. That is why it fails.

Those sections, mentioned above, were the highlights of the book…and that ain’t sayin’ much!

The most thought-provoking section is entitled, The Alternative Ride. The author questions how we deal with images incongruent with what Disney presents: kissing, hand-holding, angst (think teens) and other images that aren’t white, middle-class, middle-American “values”. How they can shock us and force us to step outside of our vacation experience.

The Bottom Line: This book is not worth reading or adding to your collection. I hate to post such a negative review, but for us Disney Geeks, there are so many better titles out there.

6 thoughts on “Daily Figment 158 – Book Review: Inside the Mouse”