This denial of the seasons opened up unlimited possibilities for importing exotic seeds, trees, plants and flowers and for integrating them into the gardens, homes and workplaces of all who prized them for their beauty. And, as the interest in indoor greenery became more widespread, conservatories came into being. These were places to “show off” the many exotic tropical species. Today, following in this tradition, conservatories, sunrooms, and atriums bring the outdoors of the tropics indoors. 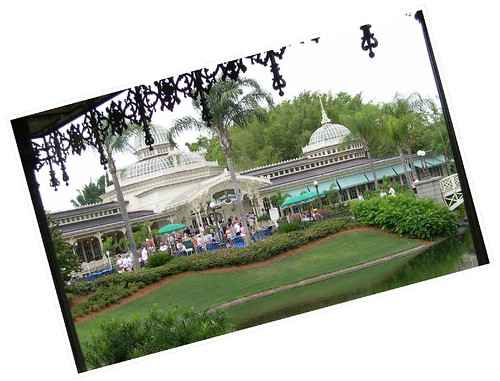 The Crystal Palace of the Magic Kingdom was inspired by the magnificent Crystal Palace, designed in 1850 by Sir Joseph Paxton for the Great Exhibition in Hyde Park, London.Its delicate, ballooning outline and pane after pane of diamond-like glass made it seem like more a mirage than an actual edifice. In our Crystal Palace, which actually serves as a garden restaurant, the intent of the conservatory has not been lost. Towering fishtail palms, bright green coffee trees, and other tropical plants bring the garden indoors. 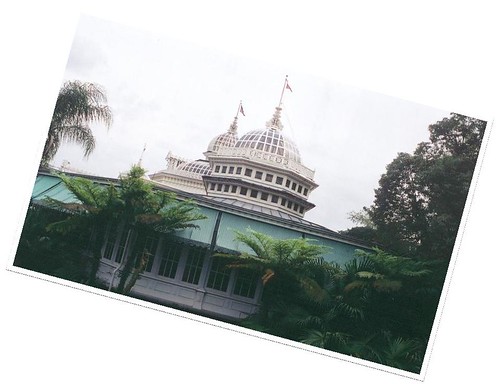 I love the Crystal Palace for the outside–the views, architectural details and the scene that is sets from the Adventureland bridge and the Central Hub. I have never eaten there, and I don’t have the gumption to, either. Pooh is not very big in this Disney Geeks‘ household, so we have chosen other venues for food. The Victorian styling of the Crystal Palace is a functional transition point from several areas in the Magic Kingdom, though.

As you leave Main St. and head towards Adventureland, the Crystal Palace sets the tone for what is to come. You get a sense of excitement and as you pass into Adventureland, the feeling of the building changes, as well. The green canopies hide the building and close it off from the world and from your view. You are passing the last remnants of civilization. Your last view of the Crystal Palace, as you cross over the bridge, shows overgrown vegetation and water coming right up to the building. You are leaving what is known and entering the unknown. Because, honestly, you never know how bad the skipper’s jokes are going to be. And the badder they are–the better the Cruise. 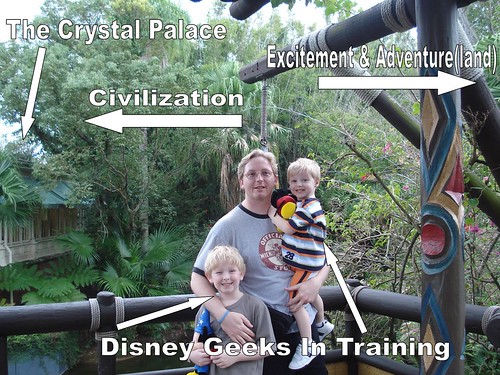 This is one of my favorite spots in all of Walt Disney World. To me, it is the place where the Imagineers got everything right. The sights, sounds and general atmosphere. 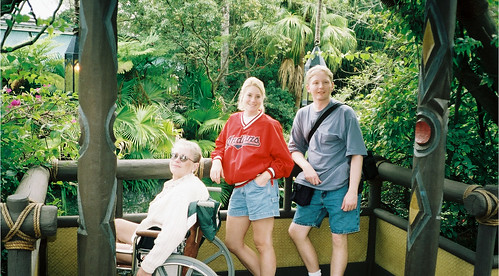 (Disney Geek Grandma, Andy’s obviously better half and me. 2001)

Standing on the bridge to Adventureland is a Zen moment. It is something that I look forward to and is a part of every vacation.