Pleasure Island was a theme park located in Wakefield, Massachusetts, that existed for about 10 years, from 1959-1969. It was one of the handful of parks that debuted after the incredible success of Disneyland. In some ways, it was to capitalize on the popularity of Disneyland as well as being influenced by Walt’s creation.

But Pleasure Island has a slightly longer history, including a little bit of rumination before Disneyland even started. But what makes Pleasure Island so unique is who was brought in to help make it successful. Take a look at the two books by Robert McLaughlin to find out! 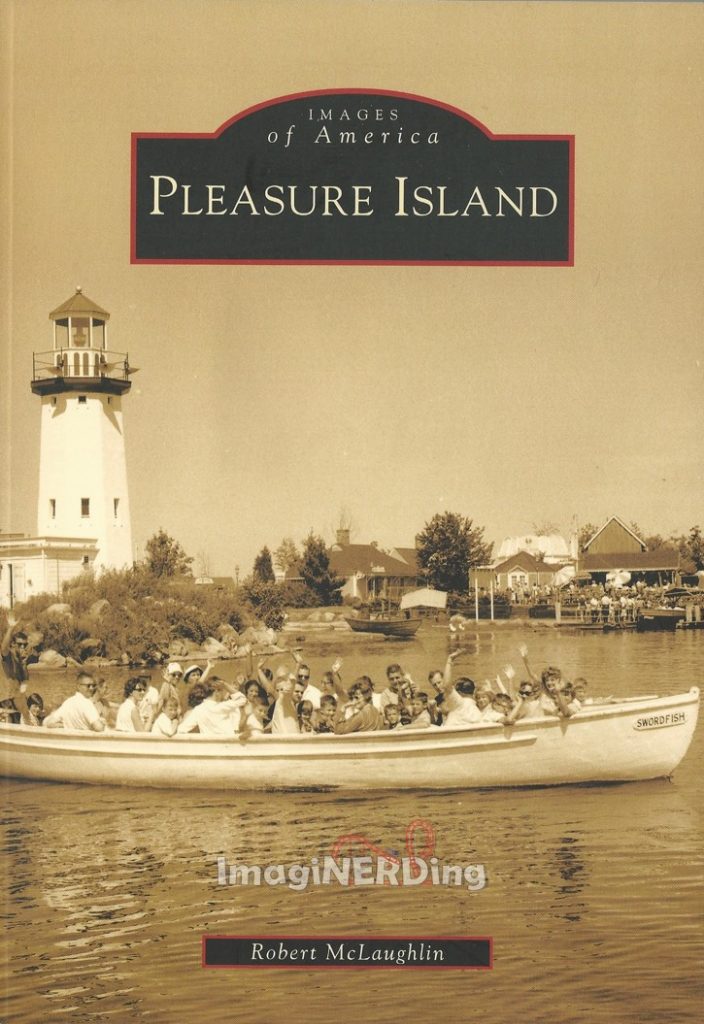 C.V. Wood was one of the original planners of Disneyland. If you know your Disney history, then you know that one thought is that Walt fired Wood for claiming that Wood, himself, was the designer of Disneyland. Subsequently, Wood was more or less erased from company history. Wood capitalized on the success of Disneyland in order to build a large number of parks across the country, all with Disneyland’s DNA, through his company, Marco Engineering. Sadly, none of them garnered the success or longevity of Disneyland. The two Arcadia Publishing titles by Robert McLaughlin go into great detail about the theme park and include some amazing photos.

The photos are what makes these books by Robert McLaughlin so special. Using various photos from his personal collection and the Friends of Pleasure Island, he’s able to trace most of the life of the park. It’s uncanny to see how similar Pleasure Island was to Disneyland, especially with the theming and quality of the rides. Wood and William Hawkes (the original owner) did everything they could to emulate Disneyland, including using Arrow to manufacture many rides, but there was still something missing. Based on the photos in the book, I can only surmise that Wood was missing the talents of the animators and filmmakers that helped bring Disneyland to life. Although Wood was able to hire a lot of the same designers, it probably comes down to how rushed the park was during construction. The park was laid out well and offered some Disneyland-level attractions, but it still wasn’t enough to keep Pleasure Island going.

You get a good feel for how the owners tried to make Pleasure Island replicate Disneyland’s success, and stand out in a few ways. McLaughlin has done his homework and presents a compact history of the park, including anecdotes from past employees and guests. Like most Arcadia Publishing titles, there are some fascinating pictures in both tiles. The second of the two books, Pleasure Island: 1959-1969, offers a majority of the images in color and it’s a surprising difference in the presentation. He also compares Pleasure Island directly with contemporaries, such as Disneyland, Freedomland and Magic Mountain (Colorado).

If you’re a fan of Pleasure Island, or simply want go deeper into theme park history, then you need to grab both of these titles by McLaughlin. They’re strong ties to Disneyland as well as the time period of the beginning of most themed entertainment.

Did you ever get to visit Pleasure Island?