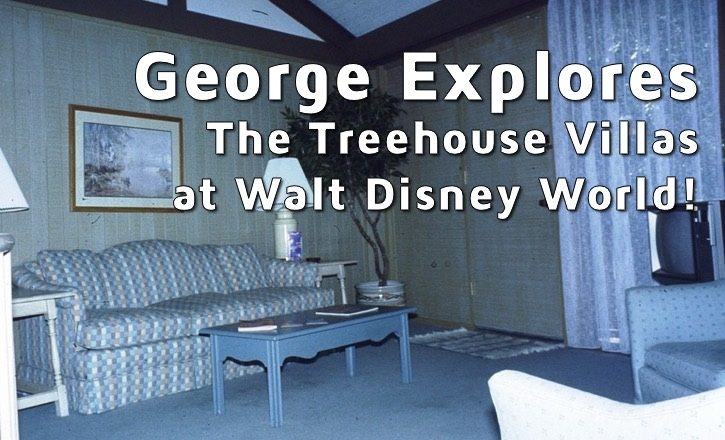 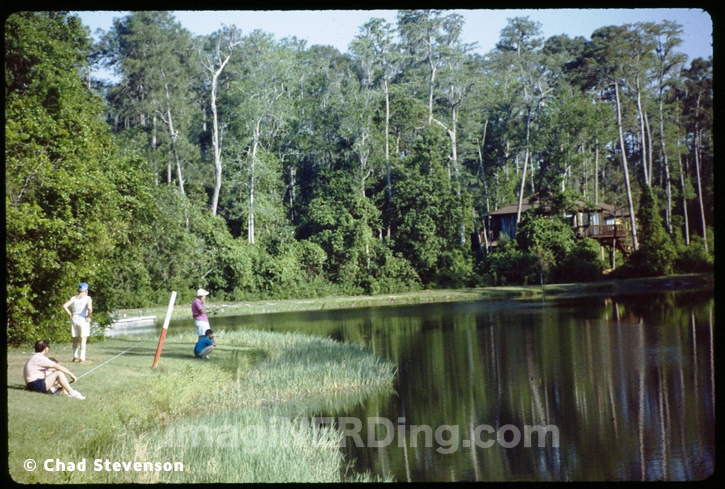 Chad told me that he’s the one crouching in the blue shirt. The other people were just random guests. 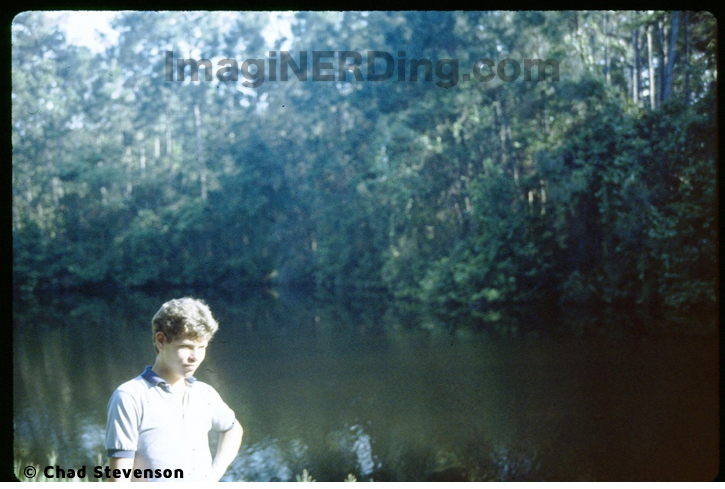 It’s hard to imagine a Walt Disney World vacation in which you just hung around by the canals. 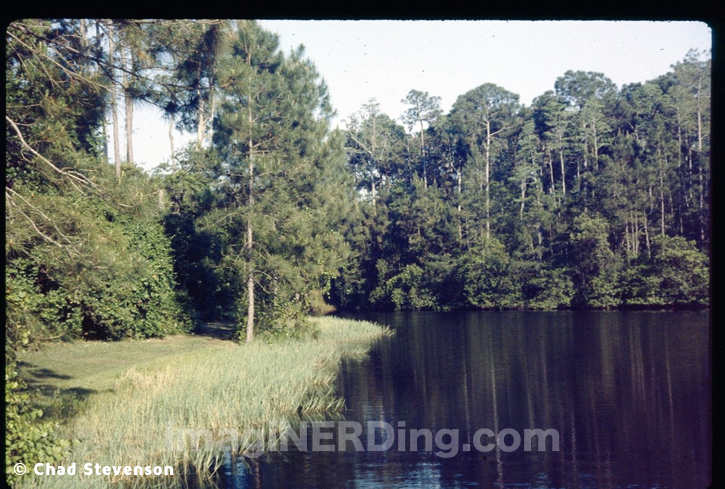 It’s hard to find vistas like this at Walt Disney World any longer. 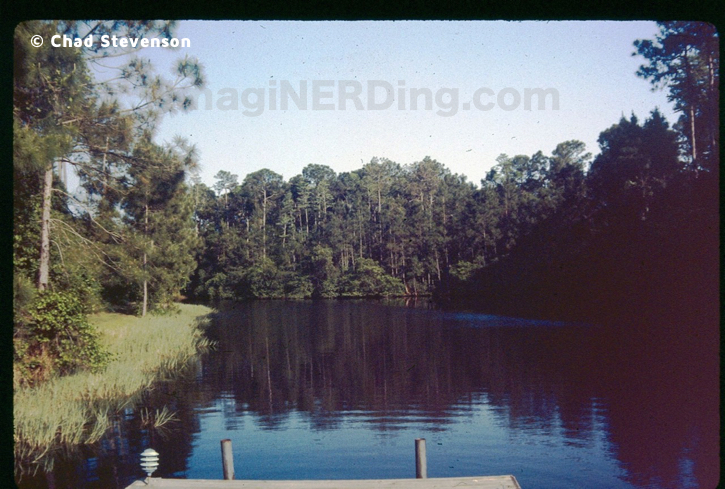 I’m assuming this is a dock of some sort. It does have a light, but there aren’t any cleats visible. Maybe it was just for fishing? 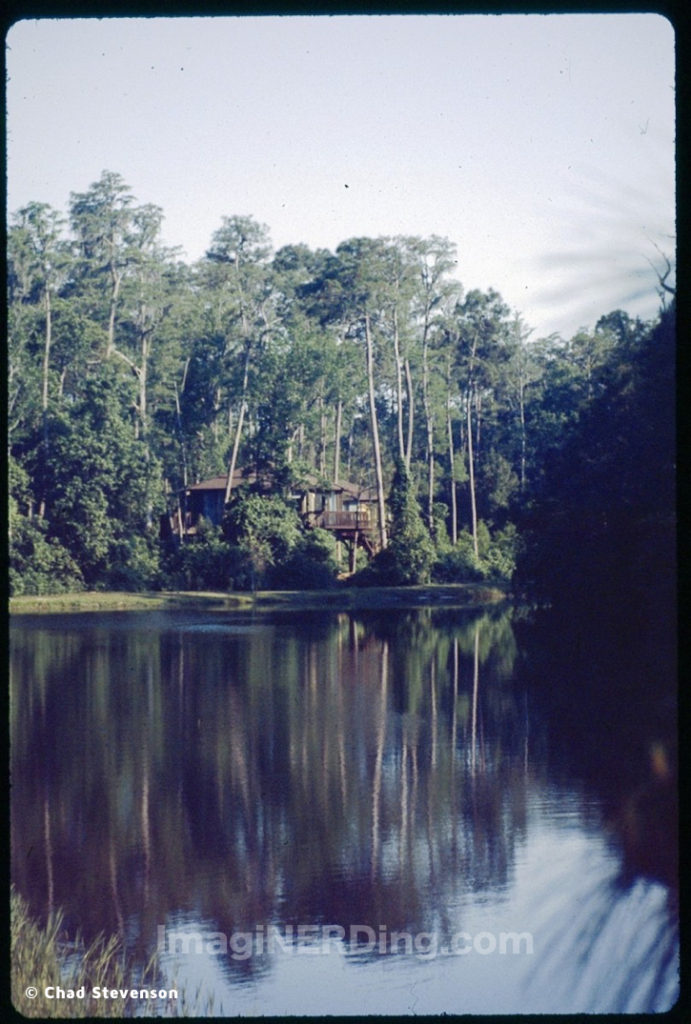 Talk about an almost postcard-perfect shot! This is the same Treehouse Villa thats in the first image. 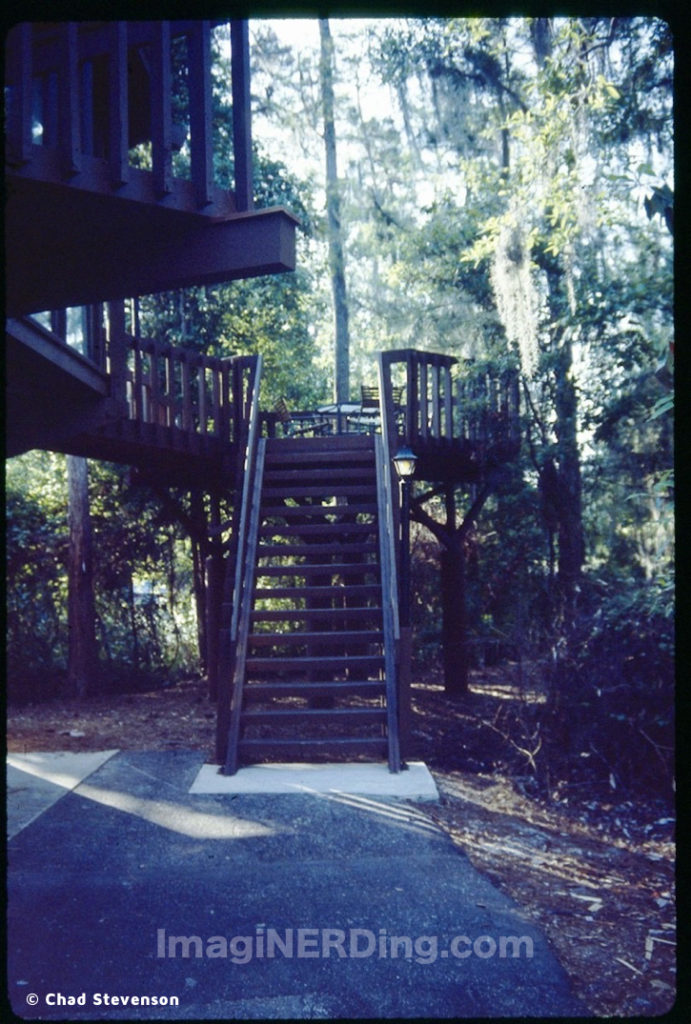 Here’s a photo of the stairwell leading to the deck of the Treehouse Villa. Chad told me that they didn’t rent one of the golf carts, so they had to walk to the bus stop. He does remember a van picking them up occasionally, but he’s not 100% sure. 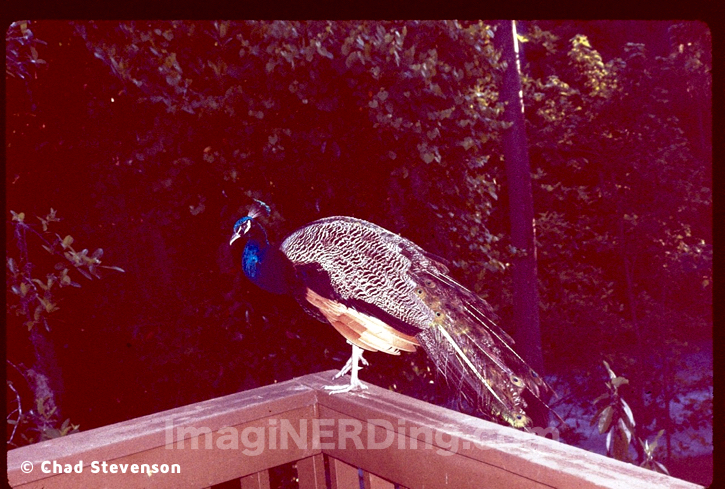 Wildlife was pretty abundant back in the day. This peacock was hanging outside and let the photographer get fairly close. 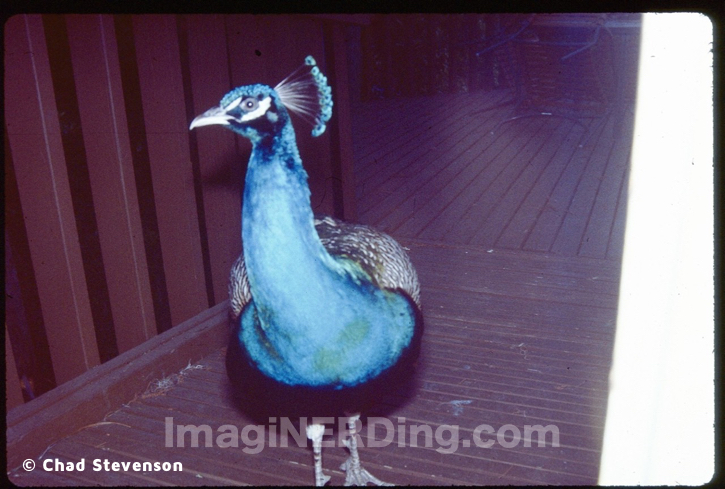 What a brazen peacock! Apparently, he wanted to come into the Treehouse Villa. Maybe they were used to being fed by guests. 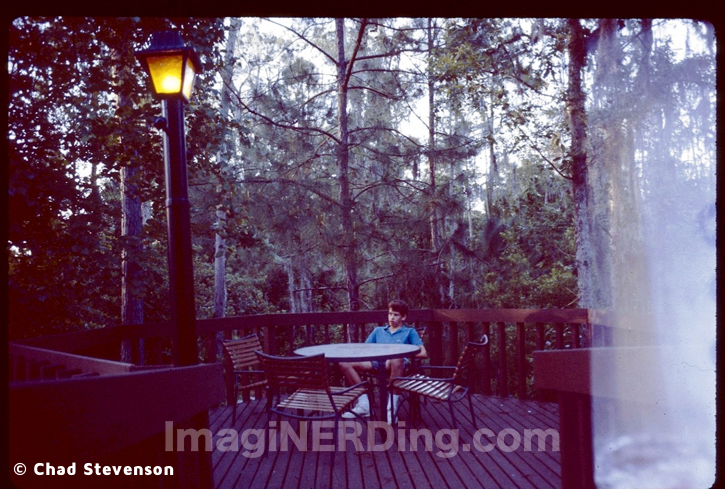 Here’s Cadet Chad sitting on the deck of the Treehouse Villa. 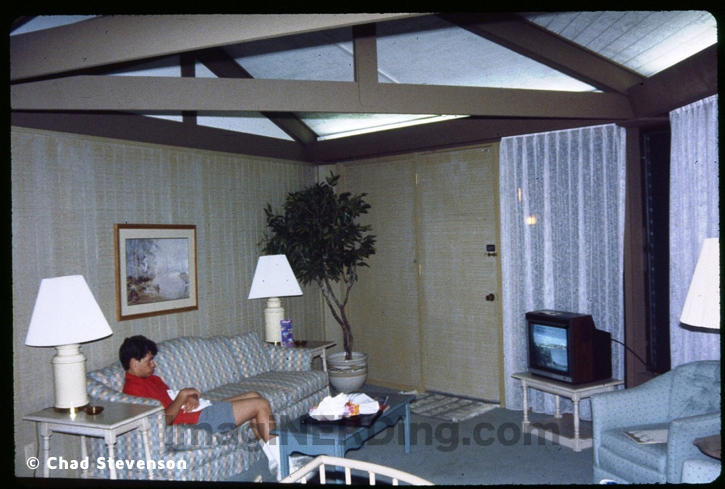 It looks like Cadet Chad is hanging out on the couch of the living room of the Treehouse Villas. And he’s watching something on television. 1983 was still way too early for Stacey! I found  list of available channels from a travel guide from the early 1980s.

Television Channels from 1982 (or so)

The walls look like they’re covered in a wallpaper that extends onto the door.  Based on the following image from an earlier post, the Treehouse Villas did go through a re-decoration at some point before 1983. You can see that the walls had wood paneling and there was shag carpeting. Also, the ceiling beams would be painted a darker color. 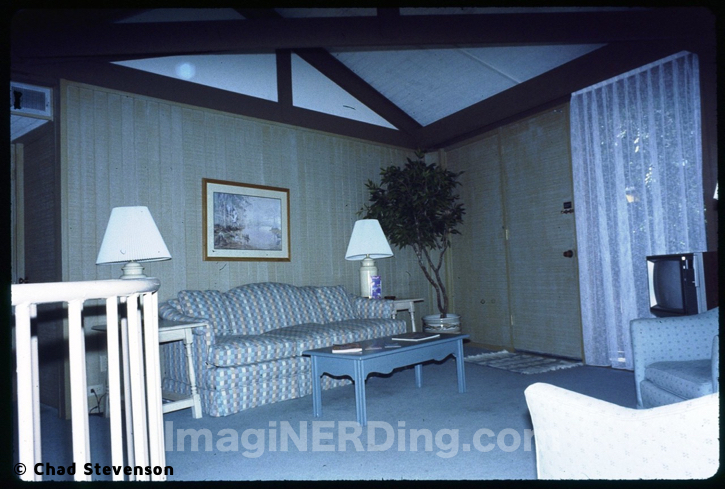 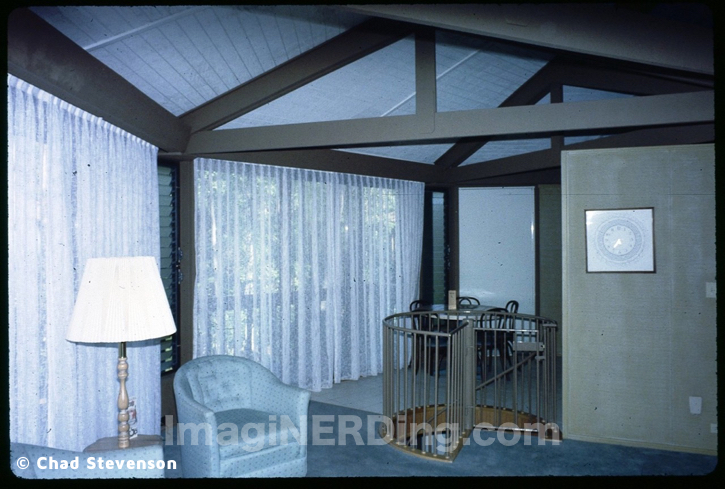 You can see another one of the family room chairs and the spiral stairway that led to the lower level. In this image, you can also see the tile floor of the kitchen and a the dining table.

The following image shows the Treehouse Villas kitchen from (circa) 1973. I can’t tell if that’s a continuation of the carpeting or a vinyl that looks like the carpeting. 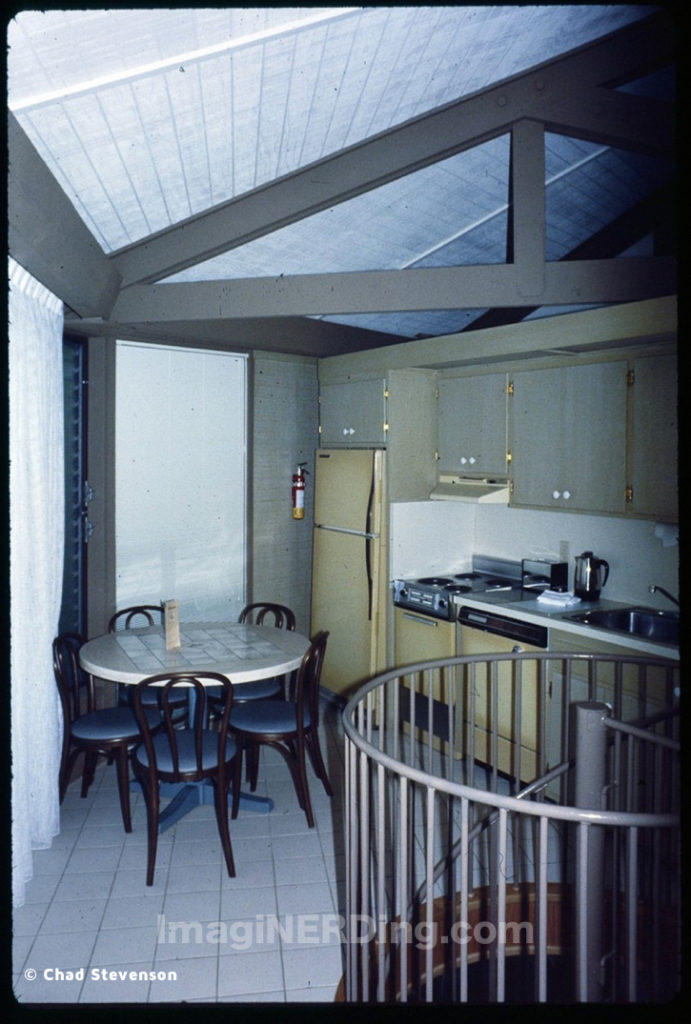 This is an incredible image. The cabinets have been resurfaced and the island is gone. It’s been replaced with a large, round table and five chairs (probably too large for the kitchen). I’m assuming that the refrigerator, stove and dishwasher are the same. The countertops and backsplash were also changed from a wooden laminate to a white countertop and backsplash. 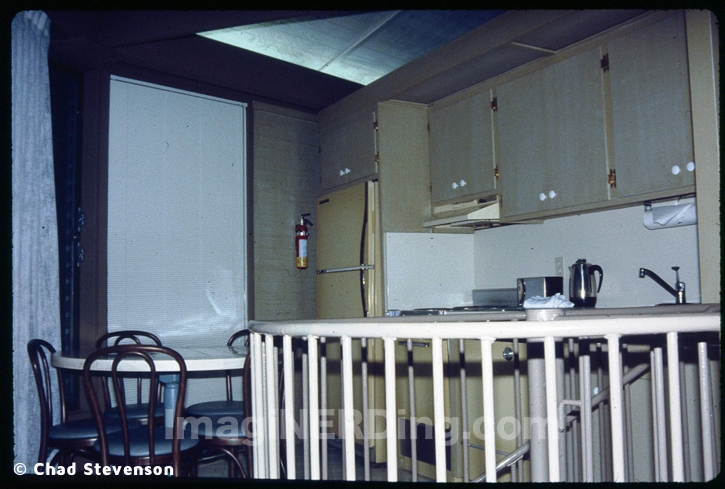 Based on this photo and the one with Cadet Chad sitting on the couch above, I assume there were fluorescent lights along the ceiling. Granted, it could be an extension of the windows. 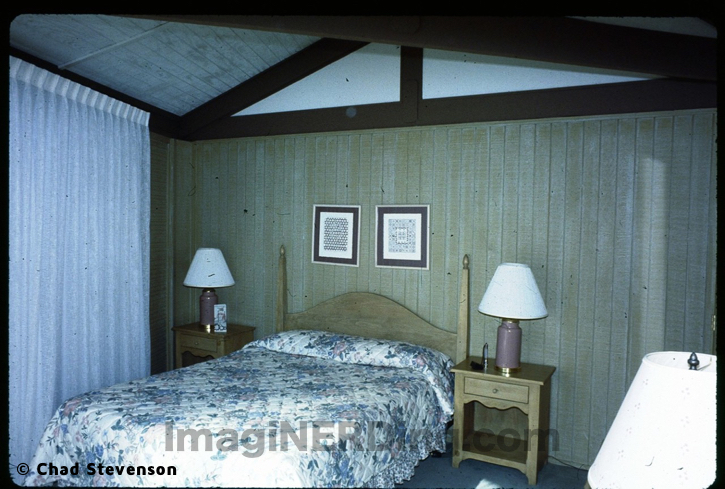 The upstairs also had two bedrooms. The Birnbaum Guides state that one bedroom had a king-sized bed and the other had a queen-sized bed. The early descriptions state the the lower level contained a den instead of a bedroom. To sleep more guests, they originally had a sleeper sofa upstairs. Sometime around 1983, they must have changed it from a den to a third bedroom.

Now, what everyone always asks about… 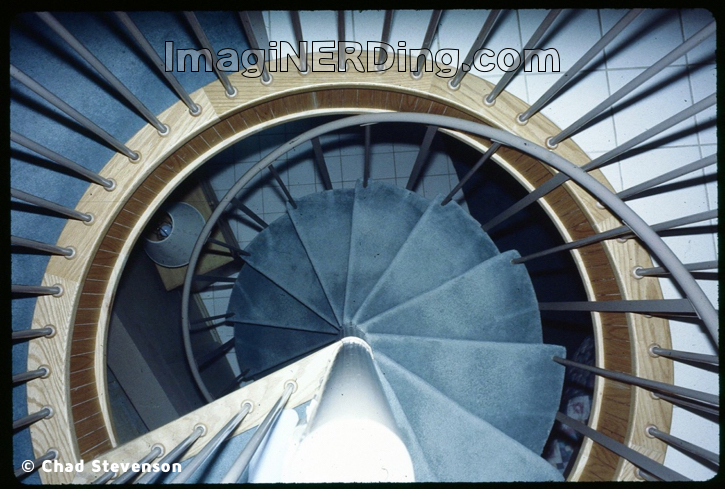 Another amazing photo for the time! I can’t say how thankful I am that Cadet Chad’s dad snapped these photos. In this photo, you can see down the spiral staircase into the lower area. 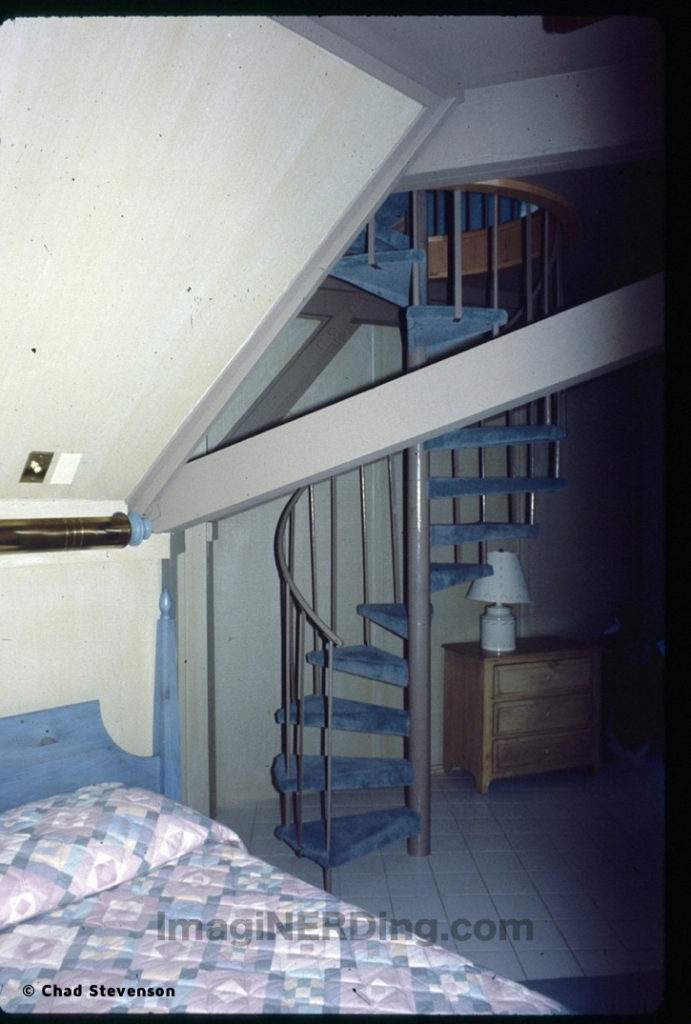 A shot of the bottom of the spiral staircase and part of the bed. There’s also a nightstand with a lamp. Again, I’m assuming that the “brass” bar above the bed is a light and the switch controls the light or the ceiling fan.

And more great carpeting on the stairs! 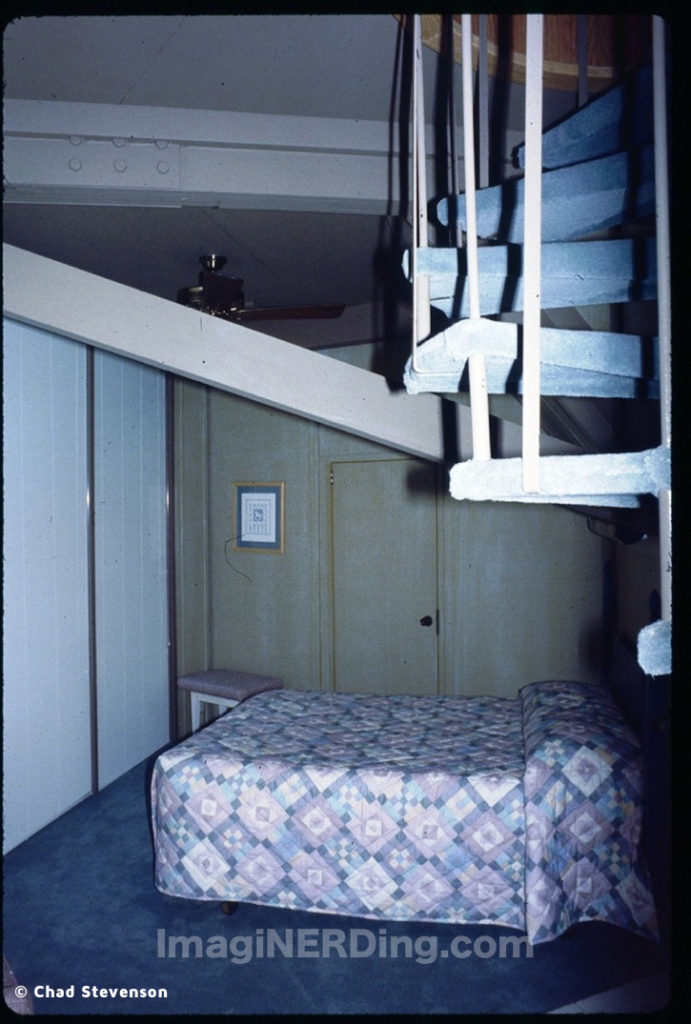 So, there was tile at the staircase landing and carpet where the bed was. Based on discussions with Cadet Chad, the door in the photo above was probably to the small bathroom that had a walk-in bathtub. Apparently, it was a bathtub in which part of the side wall moved for easier access (like a wheelchair). There was also a utility room, which is pictured below. 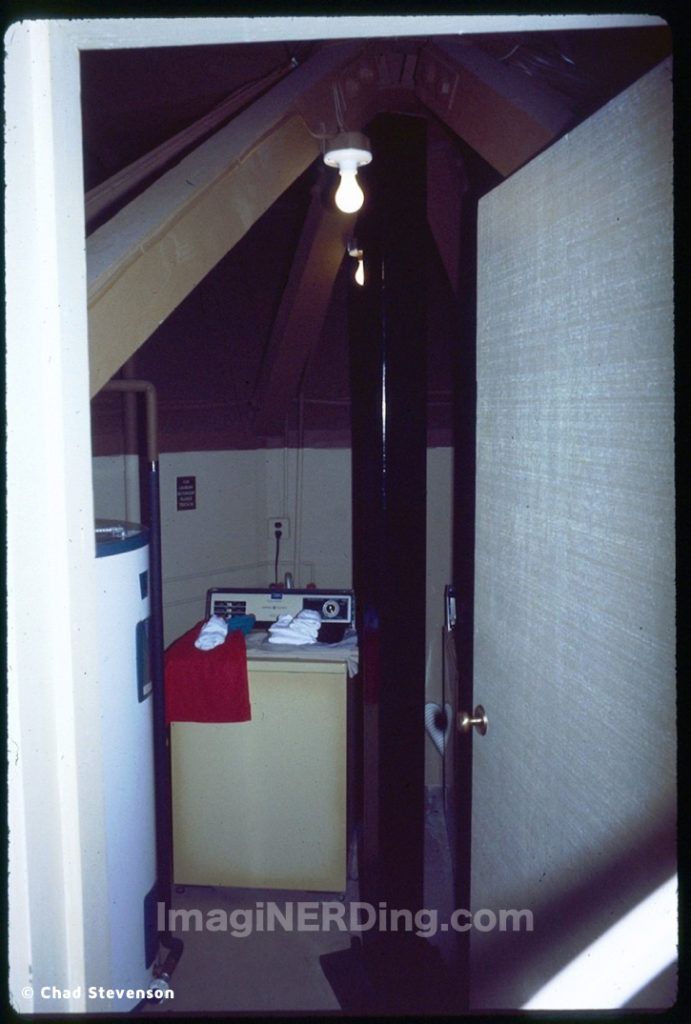 A simple washer and dryer. The lower floor also had a door which led outside.

Did you ever get to stay in the Treehouse Villas in the 1970s or 1980s? I’d love to hear about it or share photos!