Plants vs Zombies at Carowinds!

Plants vs Zombies Garden Warfare 3Z Arena is the latest attraction to open at Carowinds. It’s also the world’s first intra-active 3D attraction. And it’s based on the extremely popular franchise by PopCap Games and EA Studios. So, there is a lot of general appeal for the new attraction based on the popularity of Plants vs Zombies on so many different platforms. In the queue, the excitement of the under 14 set was quite palpable while the parents seemed a little anxious. 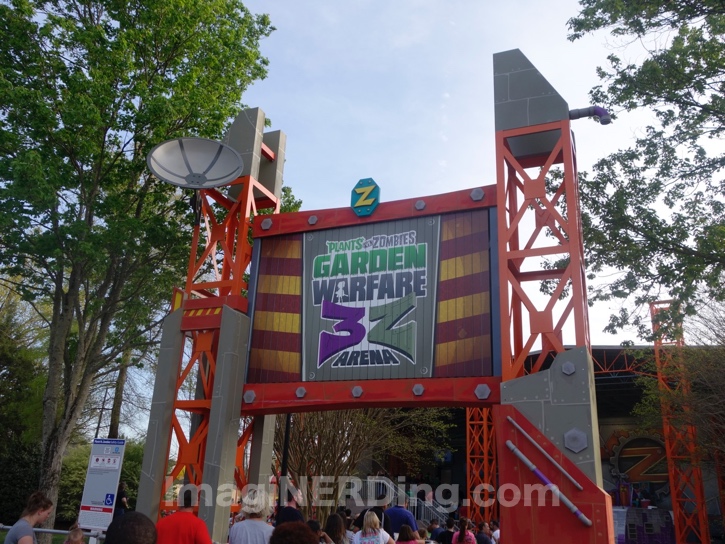 Plants vs Zombies: the Queue

The Plants vs Zombies attraction is in the former Action Theater in the County Fair section of the park (near Afterburn and the Dodge ‘Em bumper cars). 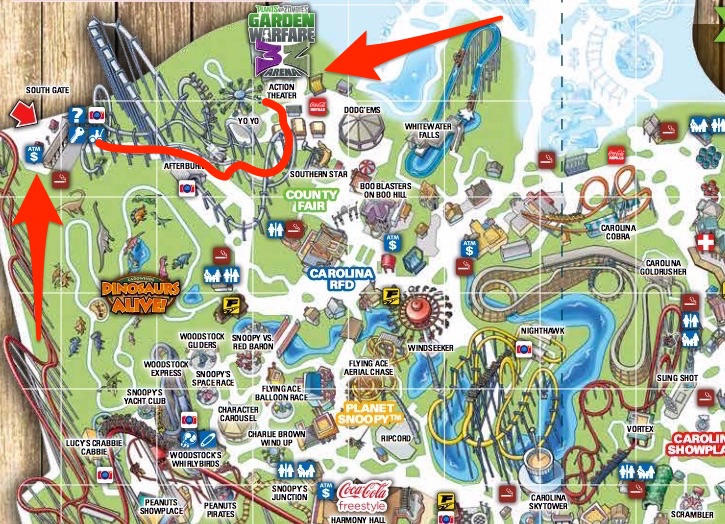 Want to hit Plants vs Zombies on the busier days? The Arena is a lot closer to the South Gate entrance (near Afterburn) and it it much less of a walk from the South Gate. usually the South Gate is only open during the busiest days. 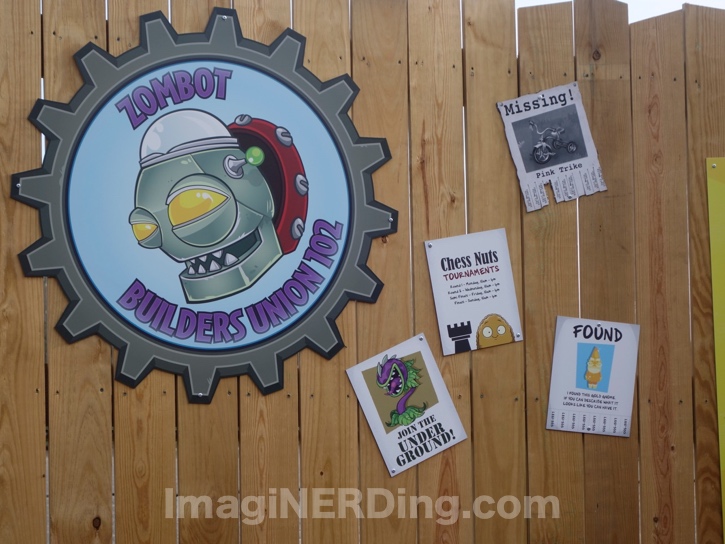 Currently, only one of the theaters is running, so both queues take you to the same side. The entire queue is outside, but there are several trees that will provide shade during the summer months of the Carolinas. Make sure to check out the posters and images on the wall that help tell the story. There are only 68 seats in the theater (that number will double when they open the second one), so it is about a 10-minute wait between games.  Anyone familiar with Soarin’ at Walt Disney World understands the hurry up and wait effect. The kids are going to get pretty bored standing in one place for five minutes at a time. It’s a good idea to break out the Eye Spy game or ask them which characters they like better. 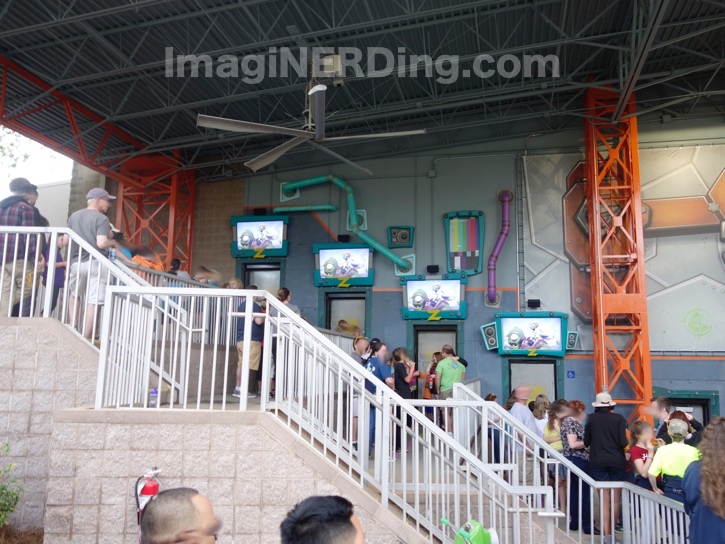 Check out the queue! There are two queues for the theater. Before you enter the area, see which queue has less people and go into that one. I probably saved 30 minutes simply by going in the right-hand queue because everyone was walking to the left.

Once you reach the pre-show area (under the awning), the employees will assign you to a row and give you the 3D glasses. There are plenty of monitors in this area that tell you the story and explain how the game works. I won’t spoil anything here, except that it is an adventure through time and space! 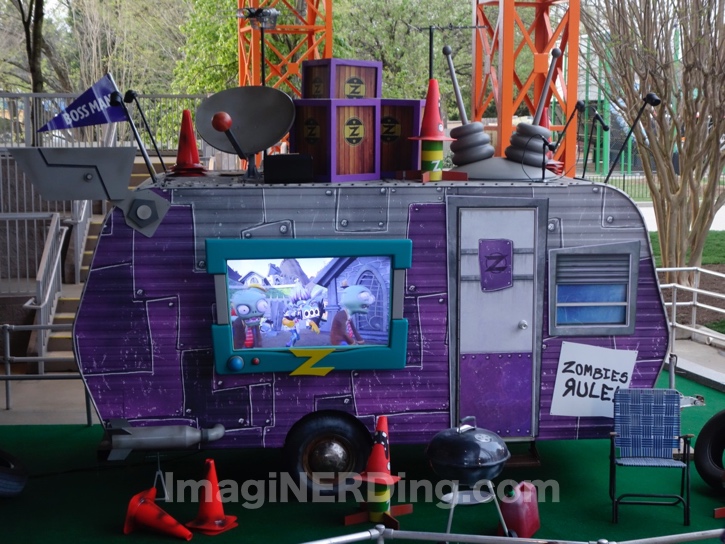 Have problems seeing 3D attractions and movies? You can’t really play the game without the 3D glasses. My oldest son can’t do 3D because of the differences in his eyes. He has to cover one eye and then can just see it in 2D. A simple eye patch will work the best! 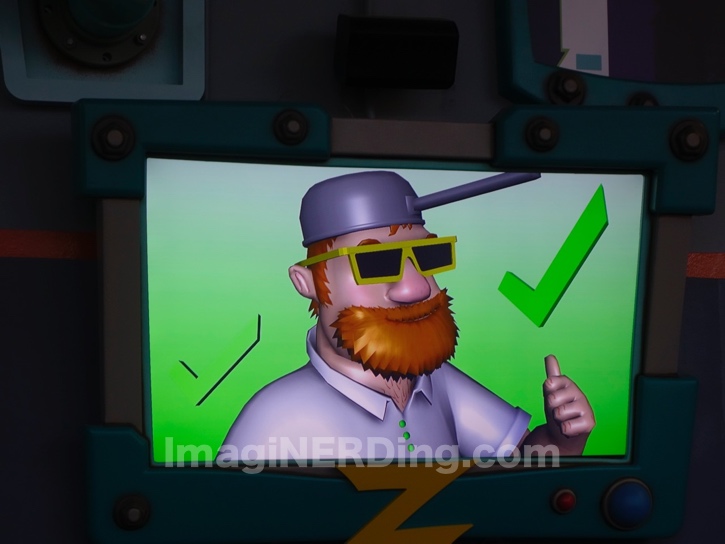 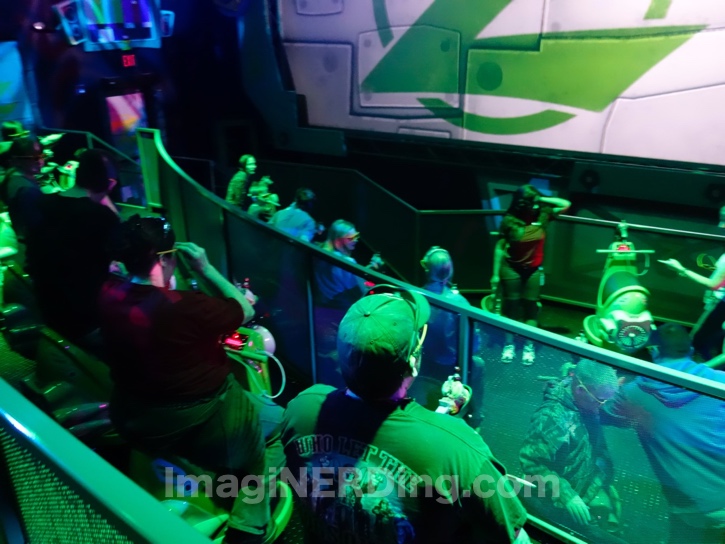 There are four rows of seats in the auditorium. The first half of the seats (about 7-10, depending on the row) are purple and the second half are green. The purple seats are Team Zombie and the green seats are Team Plant. Theme park etiquette proscribes that you walk all the way to the end of the row before sitting. If you want to be on the plants team, then be near the door. If you want to be a zombie, then be one of the last ones through the door. 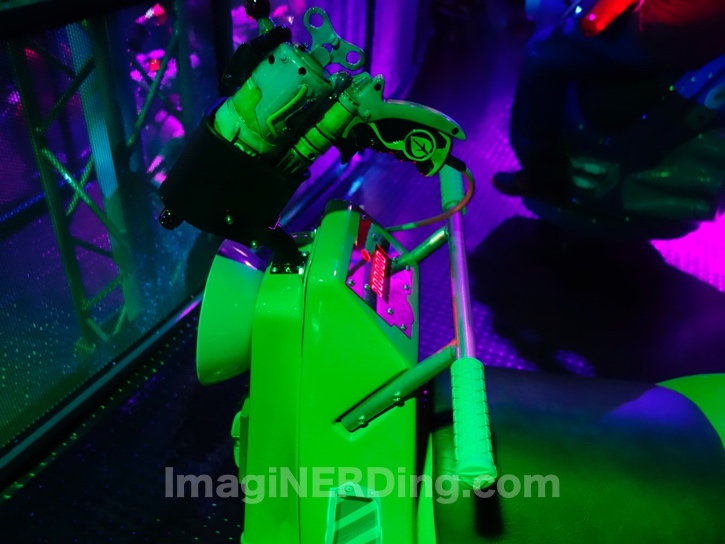 The seats, for lack of a better term, really reminded me of the horses that you would ride in front of the grocery store. The seat was padded and there were handle bars with rubber grips. There were ledges for your feet and a holster for the gun.

The gun was easy to hold and didn’t feel heavy, even after 4-5 minutes of play. There was a trigger on the handle and a very long cord connecting it to the seat. 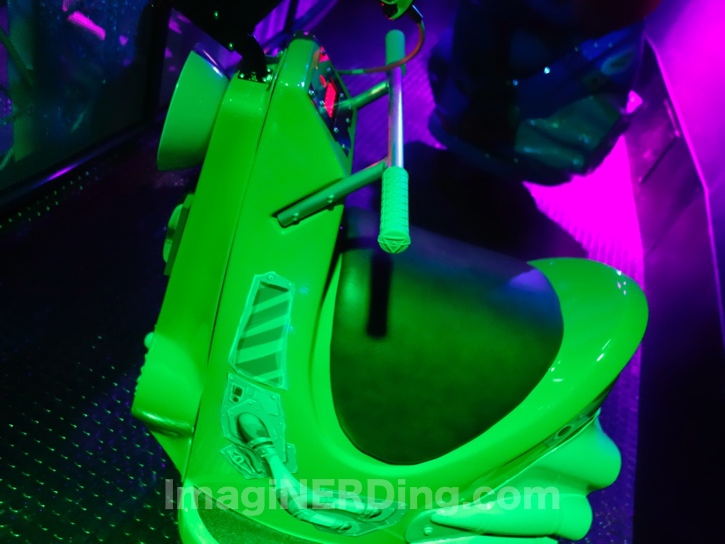 There were three battles that took place, with at least a 30 second break between the rounds that displayed the scores and statistics. The action is frenetic and very fast-paced. The seats do pitch slightly forward and backward, but not enough to really bother anyone (it’s about 8 degrees of movement).

Plants vs Zombies is still under beta mode.This means that the experience is still being tweaked, sometimes on a daily basis. Your experience could be quite different.

Overall, I think the attraction is going to be a lot of fun for families and the younger Carowinds visitors (tweens and younger are going to love it). I had a few issues with the beta version of the game, but the biggest problem was trying to figure out where I was aiming. I also couldn’t tell when I actually hit something. The gun is supposed to vibrate when you hit something, but it was still too hard to tell. I really assume (and hope) a lot of these issues will be fixed soon. 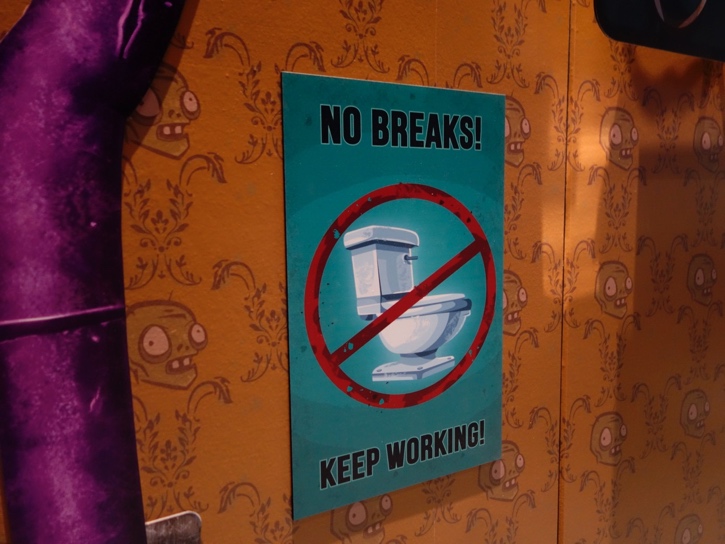 The wallpaper in the exit queue reminded me eerily of the haunted Mansion wallpaper!

Plants vs Zombies: The Store! 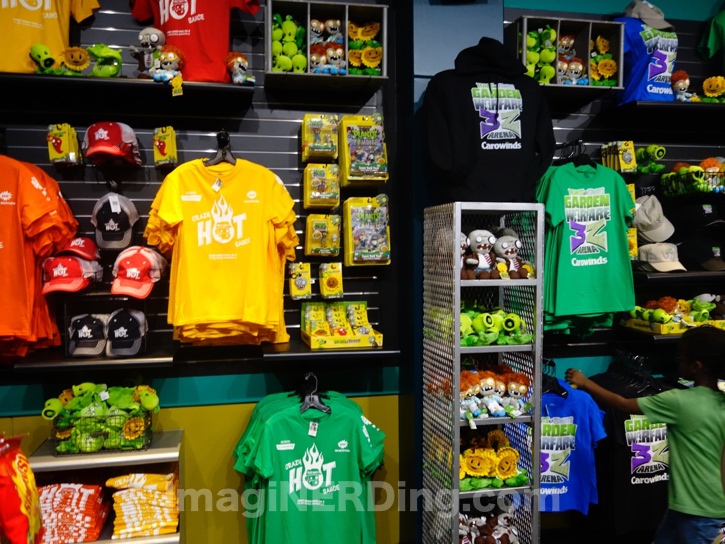 So, they do funnel you out through a shopping experience and photo op area. After the excitement of the game, you might need to be prepared to separate some greenbacks from your wallet! 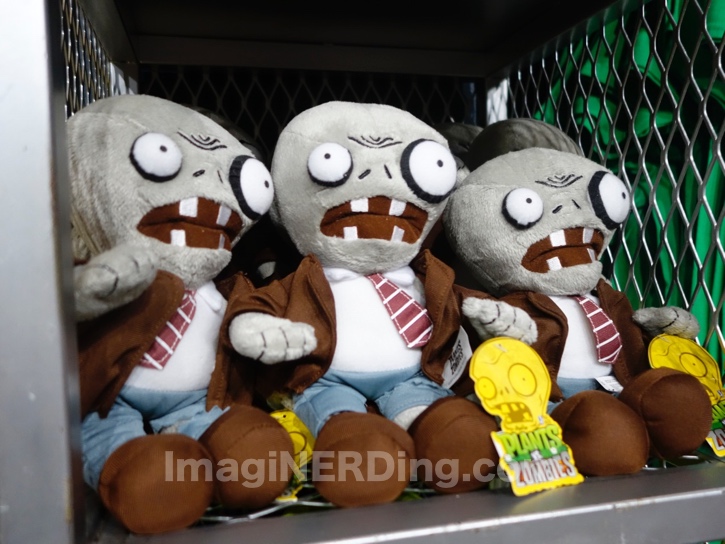 Give the kids a spending limit before playing the game! If they know they can only spend $10.00 in the gift shop, there might be a lot less begging for plush zombies. 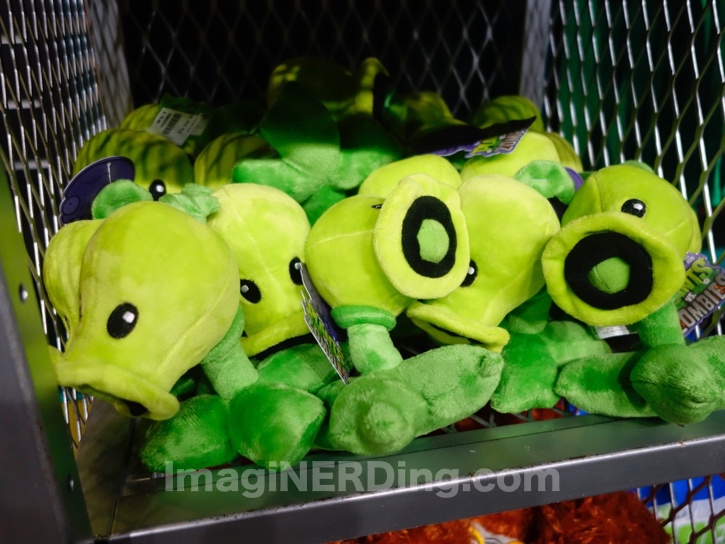 Overall, I think that Plants vs Zombies is a great addition to Carowinds. It’s not quite a dark ride and it’s not a roller coaster, but strikes a great balance of excitement and playability. It does need some tweaking but it offers a fun family experience that everyone can enjoy. If you happen to not have a great experience on your first try, make sure to try it again on a later visit since the experience can (and will) be improved. I’d like to see the aiming improved and I’d like it to be obvious when I shot something. With 34 people on each team, it was hard to tell when I shot something or someone else did.

Like most thrill parks that I visit, I really see a need for dark rides (similar to Pirates of the Caribbean and the Little Mermaid) that the whole family can enjoy.

Are you going to check out Plants vs Zombies on your next visit to Carowinds? Let me know what you think about this unique experience in the comments!

2 thoughts on “Plants vs Zombies at Carowinds!”