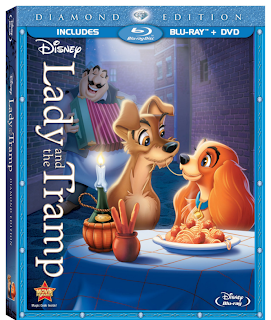 Fifty-seven years after its initial release, Lady and the Tramp makes it to Blu-ray as part of the Diamond Edition series. Most people have seen this classic Disney film during its previous theatrical, VHS and DVD releases, so you might wonder if the Blu-ray edition is worth it.
Extras on the Diamond Edition Blu-Ray
Surprisingly (or not based on recent releases), there have not been a lot of stunning extras on the Blu-ray releases. With this version of Lady and the Tramp, there are just a few new extras:

Sadly, if you don’t own an iPad, then you can’t take advantage of one of the biggest extras on the Blu-ray: Disney Second Screen. The Second Screen is an app that you run on your iPad that syncs with the film and offers behind-the-scenes information, concept art and sketches. Diane Disney Miller’s segment about her father is charming. The never-before-seen segments were written so far before the film was actually in production that they are interesting historical pieces but don’t add as much as I would like.

DVD Extras on the Diamond Blu-ray Edition
As with previous Blu-ray releases, Disney has included the segments from the prior DVD release in 2007 (which went into moratorium in 2007).

As with the other blu-ray releases of Disney animated films, the transfer to blu-ray is spectacular and worth the price. The sound is great and the animation is lush and vivid. Even if you own the DVD release from 2006, this is a great chance to own a hi-definition version of the film.

One thought on “Lady and the Tramp Blu-ray Review”