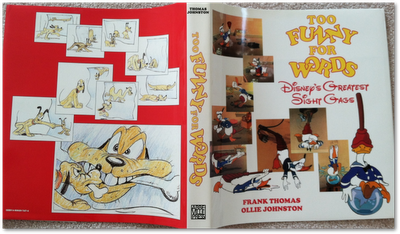 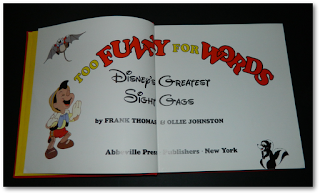 This book was a surprise for me. Too Funny For Words was actually a Disney-related book that I had not heard of. Frank Thomas and Ollie Johnston should be familiar names to most animation fans. They were both members of Disney’s legendary Nine Old Men and pretty much had a hand in every animated feature from Disney before they passed away. Thomas and Frank wrote the Illusion of Life: Disney Animation (1981) and it is considered the primer on animation. 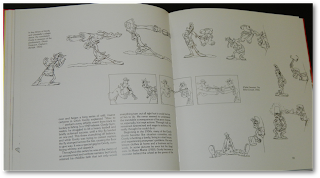 Too Funny For Words was published in 1987 and is a light-hearted and completely serious look at the evolution of Disney animated gags. This book is more than a primer; it is a look at how a gag works. Any animation student or scholar needs to own this. Thomas and Johnston have an easy and affable writing style. It is very obvious that they loved what they did and want to share it. 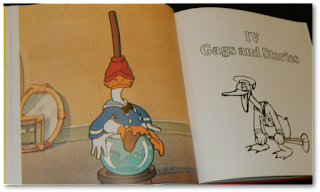 Presented in two sections, the book looks at what a gag is, how it evolved and what are the quintessential gags. Part I focuses more on how gags changed over the years and how different Disney characters fit different gags. It also deals more with the technical side of creating the gag and animating it.

Part II is all about the gags. Thomas and Johnston discuss the nine types of gags in detail with copious and beautiful illustrations, sketches and rough animation.

After finishing the book, I was surprised to watch a modern animated short and noticed in one scene that the animators used five of the gags mentioned above.

The Tableau Gag
The tableau gag is a held picture at the end of an action, in which the character is left with a ridiculous appearance due to some foreign substance or object having been placed on, around, over, or in his face or figure. This is not an action gag because the humor is in the still picture or final tableau that results from an action rather than the action itself. (p. 30)

This book really has a specific audience in mind, but can be enjoyed by anyone with an interest in animation or Disney animated films. More than just a book on gags or animation, it is a celebration of more than fifty years of Disney animators. Thomas and Johnston share some of their favorite gags from some of their favorite animators. It is a little humbling to see where two giants of animation gush over their contemporaries. As instrumental as Thomas and Johnston were to animation, they still profess their love and admiration for their fellow artists.

Special thanks to Scott Otis for providing the picture of the book jacket. You can follow him on twitter @otisney.

One thought on “Too Funny For Words, a Book Review”