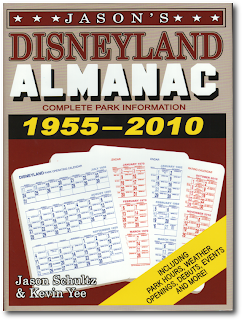 Jason’s Disneyland Almanac is one of the most amazing resources about Disneyland ever created.
And not just because Jason is a fellow librarian, either.
More or less, Jason started this project in 1995 with a timeline. As he continued to do research and discovered new sources, the timeline developed into an almanac that saw its beginnings at the impressive Disneyland Nomenclature blog (started in 2008). Kevin Yee, the prodigious author, former Disneyland cast member and Disney historian spent time helping Jason craft this monumental work. 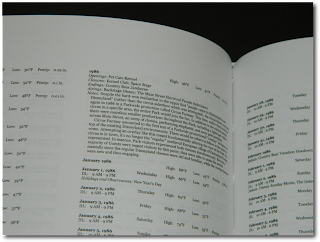 So, what’s an almanac?

An almanac is a listing of climatological data, planting dates, anniversaries, tide tables and other interesting facts.

So, a Disneyland Almanac?

I know that you won’t be doing any planting at Disneyland, so why would anyone make a Disneyland almanac? In this case, Jason and Kevin have produced a massive volume that covers park hours, weather, openings, closings, events, dedications, debuts, endings and famous visitors. Pretty unbelievable and pretty geeky (and I mean that as the highest compliment).

So, why would you want a Disneyland almanac?

This is truly a source for the Disneyland fan that needs to know everything. It is a major research tool that will quickly and succinctly provide you with some of the basic information about a specific day at Disneyland. Of course, the geekiest details are included, as well. This book is designed as a handy reference to pinpoint anything special that might have happened on a given day (like an attraction or shop closing). There is an index that provides quick access to dates featuring attractions, celebrities and notable Disney employees

Star Tours was not just another major attraction, however; it was the first of its kind. This was the first motion picture simulator used in a theme park setting. It was so new, in fact, that the simulator had to be described to the public by analogy as a cross between a roller coaster and a movie.

The park stayed open for a complete 60 hour stretch to herald the debut of Star Tours. Visitors could purchase a regular-priced ticket at any point during the extended party, and then return later as though it were one long weekend day. This was the second such 60-hour party, the first having come a year earlier to welcome Captain EO. 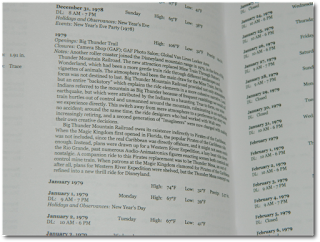 The entry from 1979 about Big Thunder Mountain Railroad:

Another roller coaster joined the Disneyland mountain range in 1979, in the form of Big Thunder Mountain Railroad. The new attraction replaced Mine Train Through Nature’s Wonderland, which had been a more gentle train ride through different landscapes and vignettes of animals. The atmosphere had been the main draw for the Mine Train, but this focus was not destined to last. Big Thunder Mountain Railroad provided not only atmosphere, but an entire “backstory” which explains the ride elements in a more cohesive narrative. Local Indians referred to the mountain as Big Thunder because of the frequent rumblings we would call earthquake, but which were attributed by the Indians to a haunting. True to form, our mine train hurtles out of control and unmanned around the mountain, culminating in an earthquake we experience directly. This switch away from mere atmosphere to a preference for story was no accident; around the same time, the ride designers who had worked with Walt were increasingly retiring, and a second generation of “Imagineers” were now charged with making their own creative decisions.

This is one of the more niche titles that I have reviewed at Imaginerding. Not only is the title very specific, but the audience is limited, as well. This isn’t a bad thing, it is just a shame that a lot of people will not add this to their Disney library due to the scope. Granted, you won’t pick up this book for leisure reading, but you will be using it to check dates, special events and to confirm details. If you are Disneyland historian, researcher or enthusiast, then you need to own this book.

By the way, did you figure out the inspiration for the cover design? 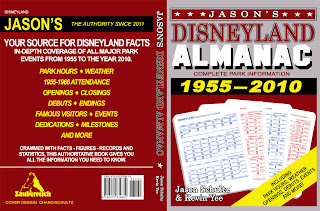 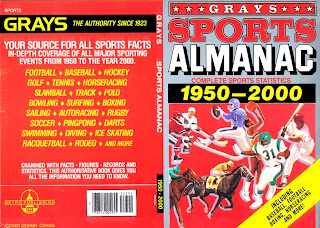 The author provided a copy of this title for review.