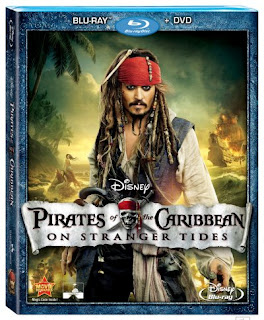 Captain Jack is dragged into a quest for a mystical object that he has no real need or interest. Of course, this leads you to question his motives during the entire movie. The filmmakers introduce some new characters, including a feisty female pirate, mermaids and… 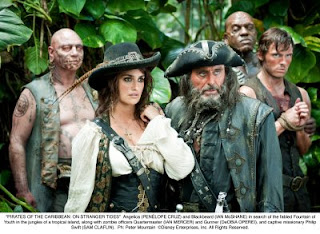 On Stranger Tides explores the mythos of Blackbeard and places him central to the story. It was a nice touch to see how frightened all of the pirates and sailors were of Blackbeard; especially having visited some of Blackbeard’s haunts on the Crystal Coast. I loved the depiction of the Queen Anne’s Revenge, as well.

In typical Pirates fashion, the film is full of intrigue, fantastic vistas, amazing stunts and witty repartee. Some might bemoan a fourth Pirates film, but it allows tremendous character development and opportunities for the characters to do what they do so well: be themselves! Even if you didn’t enjoy the middle films, On Stranger Tides can be viewed without seeing Dead Man’s Chest and At World’s End.

As an oddity, another item that seems to be hit or miss with Disney Blu-ray releases concerns the addition of bonus features. With the two-disc Blu-ray combo, there are two short featurettes that are throwaways at best. A movie with such a brilliant cast and amazing technical features would benefit with some behind-the-scenes video. Of course, this is a Pirates film and, for the most part, it is like printing money for the Company.

If you want to read a fantastic book about pirates, check out the Raiders of Castillo del Mar, an ebook written by Shane Lindsey (of Parkeology fame) and his brother Tristan.