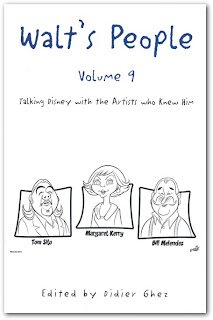 The Walt’s People series by Didier Ghez is one of the hidden gems of Disney-related literature. Didier has collected hundreds of interviews with animators, actors, employees and Imagineers. He has complied them into a series of books that offer an amazing insight into what it was like to work for Walt Disney. The following quote is from Volume 9 (pp. 380-381).

Didier Ghez: What was the first project you tackled at WDI and what were your main contributions to that project?
Julie Svendsen: My first project at WED as a new show designer was called the Moonshine Express, a ride, which much later morphed into Splash Mountain. My Art Director was Rolly Crump and I contributed story sketches showing various scenes with animal characters that you might encounter along the course of the ride.

A bit later in the book, Julie discusses working with Rolly Crump (p. 385):
My first encounter with him was when he reviewed my portfolio after I graduated from Art Center and he hired me to work at WED as a show designer in the Model Shop. That’s when I started working with him on a ride, which was then called Moonshine Express. My work on Moonshine didn’t last long because it was determined that I was needed more to work on New Fantasyland and, eventually, to paint colorboards for the pavilions in World Showcase at Epcot.

The daughter of Julius and Carol Svendsen, Julie was born on November 13, 1950, and joined WED in 1970. She spent about 25 years at Imagineering and worked with such legends as Collin Campbell, Marc Davis, Herb Ryman, Wathel Rogers, Yale Gracey, Harriet Burns, Rolly Crump, Jack Ferges, Fred Joerger, John Hench, and her friend Walt Peregoy. A tremendously talented Imagineer, she discusses her career, her parents’ life at Disney, and her friendships with many of the Disney legends she knew.

If you search for Moonshine Express (don’t forget to add Disney to the search terms), you find some interesting information from Jim Hill. Jim recounts:

“And what — pray tell — was the ‘Moonshine Express’ supposed to be like?,” you asked. Well — in this proposed version of a flume ride for Disneyland — there are the good bears that live in Bear Country (I.E. The bruins who live in town and perform at the Country Bear Playhouse) and the bad bears. You know, those bruins who live ‘way out in the woods and brew moonshine.

Well, the local sheriff (Who — if I’m remembering correctly — was supposed to be a brother of Henry’s? You know, the MC of the “Country Bear Jamboree”?) is asking for our help. Which is why we all eventually wound up in hollowed out logs, floating through the swamps out behind Bear Country, trying to find us some moonshiners.

Jim goes into greater detail on his site. Make sure to read the rest of the article.