The 1983 Annual Report for the Walt Disney Company is a much sought-after piece for collectors, due mainly to the large fold-out cover that reproduces the artwork from the Horizons attraction that was set to debut at EPCOT Center. Annual Reports are used by publicly-traded companies to discuss the previous year and offer glimpses into the future to their stock holders.

One of the more interesting prognostications from the 1983 Annual Report is about the film Roger Rabbit. On pages 18-20, there is a listing of theatrical releases for the upcoming year. One of the smaller photos is credited as the live action-animated “Roger Rabbit”. 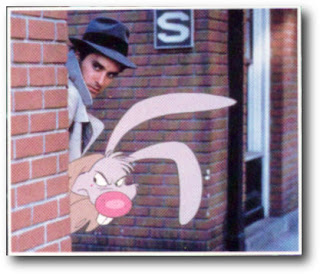 An update from friend and author extraordinaire Jeff Kurtti provides some interesting information about the photograph of Roger Rabbit and Eddie Valiant from the Annual Report. Eddie is played by Mike Gabriel, who has worked as an animator, character designer, story artist, writer and director for the Walt Disney Company on films such as The Great Mouse Detective, The Rescuers Down Under, Pocahontas, Bolt and The Princess and The Frog. Jeff also mentions that the shot was done on the backlot of Something Wicked This Way Comes.

Another interesting Roger Rabbit fact from Mouse Tracks: The Story of Walt Disney Records (by Tim Hollis and Greg Ehrbar): Pete Renady, well known voice actor, also played Eddie Valiant during some of the test footage for the film during the early planning stages.